As Tuckster, the editor of Vital Norwich will testify I have quite possibly the worst memory of any living soul.

I struggle to remember anything that happened in my past, summed up nicely the other day when an old school friend came over with his wife. I was asking his wife about her past oblivious to the fact that I went to school with her….in the same school year.

Grab an old school photo out the attic and you’d be lucky if I can name 5 or 6 people and only then because I’ve stumbled across them on social networks.

Football is the same. Tuckster will gladly recount the scorers of most goals in any given season back to those heady days in the late 70’s when we started standing behind the goal on the River End. I sit pretending I even know what he is talking about.

So, you’ll forgive me that I had to look up the scorers of this particular game that I am to recount.

The date: April 16th 2005. Away at Palace. Relegation dogfight. The game important to both teams but also especially important to the editor and myself as it was the date of his stag do – and we were going!

Living in London (and a member of the Capital Canaries) I had the honour of organising the stag and what better planning that to drag The Tuckster and his other pals (I don’t remember their names) all the way to my home turf.

A quick game of 5-a-side near Crystal Palace was in order before the main event – the big game and the possibility of being seen on Match of the Day. An opportunity we could not miss. To ensure our stardom I pulled out of the bag 14 bright yellow afro wigs. 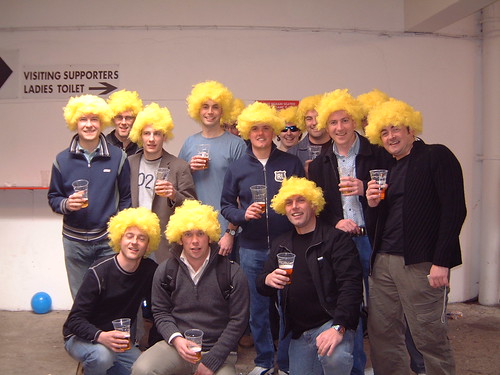 They did the trick too – we were featured on MotD at numerous points during the game.

The game itself was a cracker – but the result was a poor one, Norwich squandered a two goal lead and were held to a 3-3 draw. Ashton grabbing a brace and McKenzie with the goals. 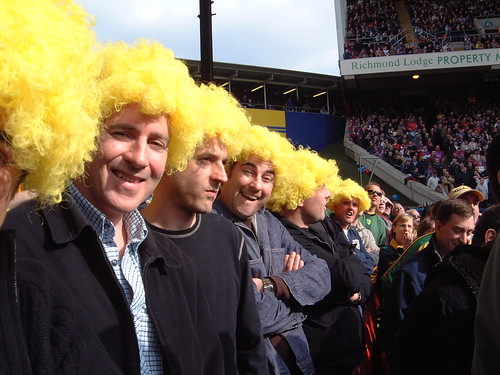 The cumulative result was that both teams got relegated. If either team had won that game they would have secured the necessary points for survival. (our 6-0 drubbing to Fulham saw us slip into the bottom three despite being the only team who had their own fate in their hands).

Of course it didn’t ruin the day and we all had a fantastic evening but here we are, eleven years later in a very similar position. We just don’t want a similar result. 3-1 will do nicely thank you.

Oh…and don’t forget to ask the Tuckster what I made him wear for the five-a-side!