A Decade Of Norwich Dominance As Lambert Almost Gets Nicked 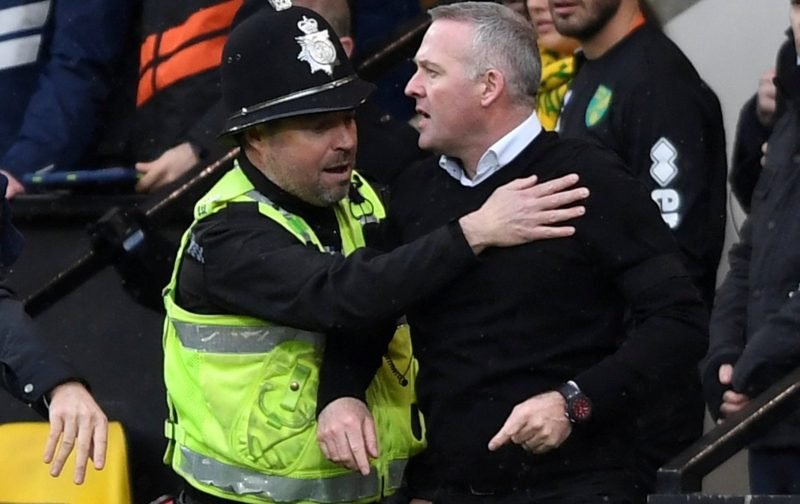 Daniel Farke kept his cool in the white hot atmosphere of the second East Anglian derby of the season, while his opposite number completely lost his composure.

Paul Lambert was sent off just before the end of the first half after a typically shocking tackle on Max Aarons by Jon Nolan, right in front of the dugouts, sparked a mass scuffle between the two sets of players then saw the two benches get involved.

Lambert reacted furiously and explosively, seemingly to something said, which resulted in a Police Officer having to enter the Ipswich technical area and push the ex-City manager away. City’s Head of Performance, Chris Domogalla was also sent off. Lambert’s reaction was surely the sign of a man, despite his comments that his time at Norwich was all forgotten, to whom this fixture clearly meant a lot.

The Canaries took the lead with their first attack of the game and scored through Onel Hernandez’s close range shot after a brave header from Mario Vrancic.

Ipswich were poor generally and looked exactly what they are, a team packed full of League One players bereft of quality. They rarely troubled the Norwich goal and Tim Krul only had a couple of routine saves to make throughout.

As the second half unfolded, Teemu Pukki eventually got his reward for a hard working shift with two goals both from Emi Buendia assists.

Ipswich attempted to kick our best players and Vrancic was forced off at the very end of the first half and replaced by Alex Tettey. Fingers crossed he’s ok.

There was still time for another melee late in the second half as both teams squared up to each other again after yet another late Ipswich tackle, this time on Buendia, and I imagine that the FA will have something to say about all this in the coming days.

The three points mean that City are now two points clear at the top and five clear of third place, which is the one we really should concentrate on.

The three goals conceded by Ipswich have made their goal difference even worse meaning that they are effectively ten points off safety. The reality is that they are virtually done and although Lambert won’t concede that publicly, he must know the reality of the situation as his team stare at the abyss of League One, somewhere that his squad should be comfortable.