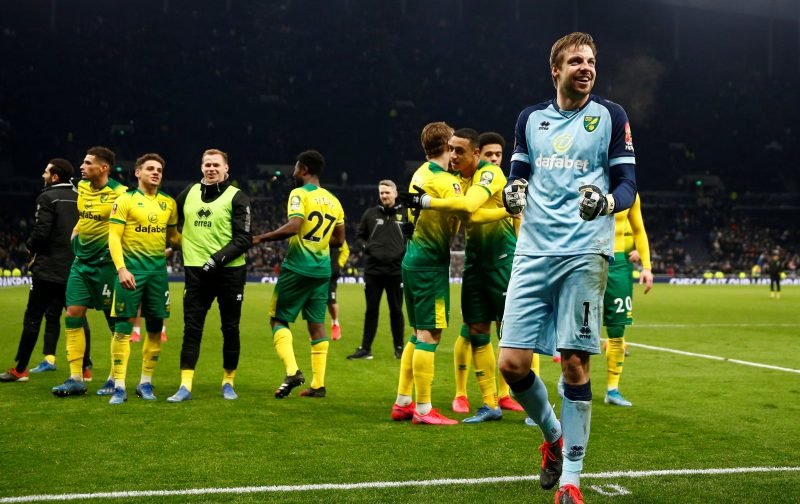 There is little doubt that when Ralf Fahrmann agreed a season-long loan move to Norwich City last summer that he thought he would be the newly promoted Premier League side’s number one goalkeeper.

After all, Fahrmann came with an excellent reputation in the Bundesliga and he was well known to the Canaries’ German Head Coach, Daniel Farke. In fact, it’s fair to say that Fahrmann was held in high regard by most German football fans as well. My lad took part in a German school exchange last year and we had 14-year-old Cedric come to stay with us for a week.

Cedric is a huge Bayern Munich fan and he loves his football in general. His opinion of Fahrmann was “He is an excellent goalkeeper.”

Things didn’t quite work out for Ralf though because he didn’t reckon on Tim Krul rediscovering the form that made him such a good player for Newcastle prior to an ACL injury that basically, under Rafa Benitez’s direction, ended his time in the North East.

After that, Krul spent time back in his native Holland with Ajax and AZ Alkmaar in an unhappy 2016/17 loan season. He had signed a new one year extension with Newcastle in the summer of 2016 before being loaned to Ajax for the season. However, it didn’t work out and he made just six appearances for the Ajax’s reserve team before the loan was cut short and he then joined AZ on loan in January 2017.

He eventually turned up at Norwich on a free transfer in the summer of 2018 after a year at Brighton under his old manager, Chris Hughton.

It’s fair to say that Krul was a little rusty when he joined Norwich and a couple of dodgy keeper moments early on in that debut season saw him targeted by the boo boys at Carrow Road. Eventually he hit his stride though and he played a big part in Norwich’s seemingly unlikely promotion push that year.

There were though, those within the fan base and it seems, the club, who had reservations about Krul’s ability to perform at the levels he had previously achieved before his knee injury. Certainly, there were those who continued to moan about Krul, saying he want good enough, and then we got big Ralf Fahrmann in on loan.

The deal reportedly cost the Canaries €3m for the season and depending on your point of view, it was either a success or a failure.

Obviously the player himself doesn’t deem that it was a success and neither does his wife, Nadine. In recent weeks, Nadine had made rather a nuisance of herself on social media, using her Instagram account to moan about the couple’s life in England. Questioning why they were still on this “Fool’s island” and “What are we doing here?”

Ralf though, arguably, had some bad luck that didn’t see him able to take the opportunities to become City’s number one when they presented themselves.

I don’t think anyone could argue that Krul was worthy of starting this season at Liverpool for the opening game. His efforts, especially in the last three months of the Championship promotion season saw to that. Eventually, a chance presented itself for Ralf though when Krul became injured in the warm-up at Turf Moor. He managed to complete the game but was then unavailable with a back problem for the next two games, against Palace and Villa.

Ralf had injured his groin in the week before Burnley and it was Michael McGovern that was on the bench at Turf Moor. Fahrmann made a miraculous recovery though and was named on the team sheet for the trip to Crystal Palace, where he lasted just 22 minutes before being subbed off injured for McGovern to complete the game.

It was the former Northern Ireland international who played in the 1-5 loss against Aston Villa, saving a penalty in that game as well. For Ralf, the chance had gone and it never came back.

Daniel Farke has something of a reputation for keeping players in the side who have performed well and continue to perform well. Had Ralf done okay in those two games that Krul was out and not gotten himself injured again, then this could’ve been a very different story.

But it didn’t. Krul came back in a battling 0-0 draw at Bournemouth and he has steadily been building momentum ever since. Against Manchester United, he incredibly saved two penalties, underlining his title as The Penalty Killer, a reputation that was only increased when he saved two penalties against Tottenham in last week’s FA Cup penalty shootout and more often than not, he has made some excellent saves in games when the defence in front of him has come up short.

Fahrmann, it seems, sided with his wife as she became more and more negative on her Instagram account, which is private, but monitored by the German media. Whether that was by design or not is unknown. Such negativity is not ideal and will not be tolerated within the Norwich camp, so when a chance came for Ralf to move on, it was deemed to be a good idea for all concerned.

Fahrmann went to SK Brann in Norway, where he will stay until June. He is under contract at Schalke until 2023 and the Club Captain will return there in the summer to battle for the number one shirt again. This time with Markus Schubert, as Alex Nubel seems Bayern Munich bound, a tough looking battle as Schubert is the German U21 keeper.

Arguably, the very presence of Ralf Fahrmann has helped push Tim Krul to epic levels of performance this season. Performance levels that, I would say, see him as the favourite for the Player of the Season award and put him in line for a Netherlands call-up, ahead of Euro 2020.

If Ralf Fahrmann had played the majority of the season and done as well as Tim Krul has, then we’d all be applauding the deal. The fact that one of those two keepers, and remember only one could ever play, has performed at such high levels means that it could be argued that the loan wasn’t a complete failure for Norwich City.

Would Tim Krul have been pushed so hard if his number two was Michael McGovern?

Next season, Norwich will need to recruit another quality keeper to challenge Krul and the battle will start all over again for Tim. It seems unlikely to me that either Aston Oxborough or Archie Mair are competitive or mature enough yet to take on Krul and push him as he was pushed this season.

The 2019/20 season was certainly a tale of two keepers for Norwich City, with Tim Krul, the Penalty Killer himself, the last man standing.