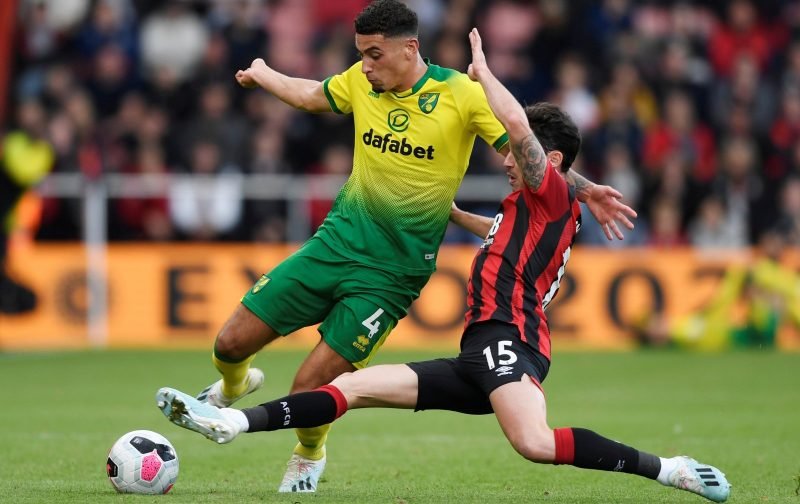 Norwich City got their first point away from home of the season with a spirited 0-0 draw at Bournemouth.

Prior to the game, with three straight defeats behind us, I don’t mind admitting that I was nervous about this trip to the South Coast. The last defeat, that horrible 5-1 reverse at Carrow Road against Aston Villa had surely shaken the confidence of even the most ardently positive canary and the international break gave us two weeks to dwell on it.

The news on Friday of the return to full fitness of Tim Krul, Tom Trybull, Alex Tettey, Onel Hernandez, Kenny McLean and Todd Cantwell was a real shot in the arm though and the return to the starting XI of Krul and Tettey in particular really made a difference.

Marco Stiepermann finally made way, dropping to the bench to accommodate Tettey’s return, after a fairly lacklustre start to life in the Premier League. Marco has yet to show anything like the same form that he displayed more often than not in last season’s Championship winning effort and seeing him drop down out of the side was not a big surprise.

Moritz Leitner was tasked to play in the “number 10” role behind Teemu Pukki with Tettey providing some much needed steel as a defensive shield in front of the back four and he did very well, not that I was surprised by that. There are often people bashing the mere thought of Alex playing, on social media which is ridiculous, but even with his advancing years he offers plenty in the defensive midfield role and he has been a club stalwart as well as an absolute bargain for Norwich City.

The fact that he had to finish the game as a makeshift centre-back alongside  Ibrahim Amadou, who is currently fulfilling the same role, and did very well there too means that he ended up being my man of the match.

Talking of Amadou, I thought that he also had a good game, getting back to the levels of defensive strength that he showed against Manchester City. The loss of Ben Godfrey early in the second half hasn’t been fully explained yet but seems likely to be something to do with his hernia operation just ten days ago. After the game, Daniel Farke was keen to play the situation down, suggesting that it perhaps wasn’t anything serious and that Big Ben could yet be available to face Manchester United next Sunday.

It seemed pretty innocuous, with Ben signalling immediately to the bench after a straightforward pass. If he doesn’t make it, then Farke will have a decision to make about who should play alongside Amadou. The loss of Timm Klose for probably the whole season, as well as Grant Hanley and Christoph Zimmermann for the next couple of months meant that as Godfrey hobbled off the pitch, all four of City’s senior centre-backs were injured. No amount of summer planning could’ve foreseen such a number of injuries to one particular position and as I’ve said before, I’d like to see how Liverpool would cope without Van Dijk, Matip, Gomez and Lovren. I imagine that Klopp would be turning to either his U23s or senior central midfielders.

Daniel Farke now has that situation to deal with and if Godfrey doesn’t make the Man United game then it could mean a debut for Akin Famewo and if not a debut then it’ll almost certainly see him back on the bench.

It’s sad that the injury to Godfrey is the big story coming out of the match because what it should really be all about is the clean sheet and a precious away point, City’s only point gained in the last twelve available.

It gets us back on track and it’s something to build on.

It’s only a point but City could easily have won the game had Tom Trybull’s late thunderbolt from 25 yards been on target. Trybull came on to replace Godfrey in the 50th minute and set about showing how important he too is in that defensive midfield role. His late shot at goal was only just off target, having been given the ball after good work by the also returning Onel Hernandez.

The sight of Hernandez bombing down the wing in full-flight has been sorely missed and although it was only a late ten minute cameo, he showed us what we’ve been missing as well as a determination from his Head Coach to try to win the game.

City came on strong towards the end and ended the game having just shaded the possession over Eddie Howe’s men, who like a bit of ball retention themselves.

Bournemouth is a tough place to go for any team and the way that City dealt with the Cherries’ threat looked generally pretty comfortable with Tim Krul making himself big to deny Dominic Solanke during the first-half in the game’s only big chance.

City were slightly more pragmatic when they didn’t have the ball, reverting to a 4-1-4-1 formation to compress the midfield when the opposition had the ball.

As the game wore on and things got stretched a little, Norwich had their best chance when Teemu Pukki hit a low shot from the edge of the area only to see it very well saved by the Cherries’ goalkeeper, Aaron Ramsdale. It was the Canaries’ only shot on target in the match although the home side only managed two themselves. City had a total number of 10 shots to Bournemouth’s 11, so as you can see it was fairly even on that front.

The home defence were clearly wary of Pukki and gave him plenty of respect throughout, perhaps concerned at his return to scoring form with Finland.

Ibrahim Amadou made a total of 13 clearances today.

That's the most from any Norwich City player in a single game in the club's last 50 league matches #ncfc ????

Next up are Manchester United at home in a week’s time. The red devils have to deal with a visit from arch rivals and league leaders Liverpool first though and as we have seen in the displays against Newcastle, Chelsea and Manchester City, at home Norwich will fancy giving any visiting team a game, even more so with the return of so many first team regulars.

In the meantime, I’m keeping my fingers crossed for Ben Godfrey.