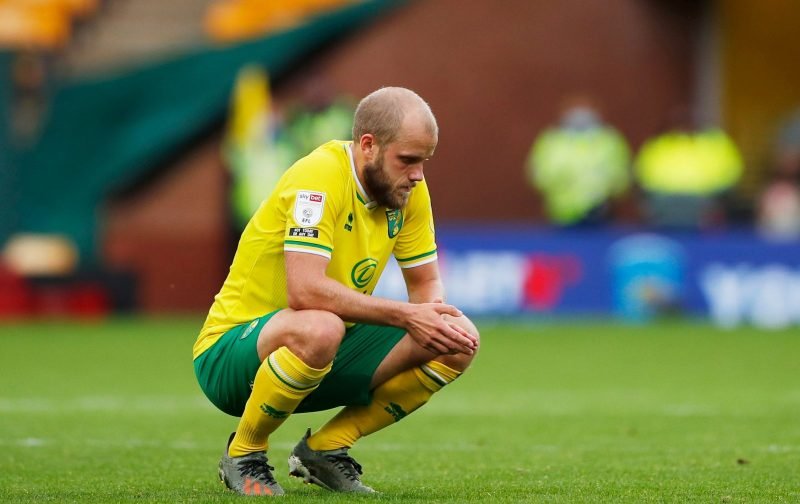 I was in the City early on Saturday morning, having to take my lad for an early (ish) hair cut and then to run a few errands, knowing full well that I needed to be home in time to sort out some bacon sandwiches and a brew in order to watch the glorious canaries at 12.30.

I still have that tingle of excitement, albeit it’s diminished to the feeling that I used to get from physically watching the game at the ground and I am jealous of seeing how the Bundesliga are running things. Dortmund had 11,000 fans, all sensibly social distanced to watch them beat Freiburg 4-0 on Saturday. The experiment run at Carrow Road for the Preston game showed it could work here, so I really don’t see the problem. Especially when we hear that the virus is mostly passed indoors.

Anyway, back to this game.

The team news at 11.30 pleased me, I won’t lie. Seeing that Kenny McLean had been replaced by Lukas Rupp was positive, as was the inclusion of Ben Gibson for his first start but the return of Emi Buendia had me smiling the most. There was no sign of Todd Cantwell in the squad and Daniel Farke’s guarded comments after the match just make me think that he’s still not doing/focussed enough.

The disappointing thing at the moment is that against Derby, a side with little forward ambition but a lot of defensive nous at least this week, we could’ve done with a fully focussed Cantwell and his quick feet and speed of thought. Oh well, if he’s still here after the international break, maybe he’ll sort himself out.

I was looking forward to seeing how Lukas Rupp would perform in his natural central midfield berth. Rupp has been a figure of hate for some on social media after his ‘difficult” start to life in Norfolk. He joined a stuttering Norwich last January and it must’ve been incredibly tough having to find his feet in a new country when coupled with a team imploding on the pitch and being asked to play almost everywhere other than your regular position.

I remember certain members of the Norwich City Twitterati typing that Mario Vrancic should never play for the club again after he’d done little to impress in his first eight odd months of football at Norwich.

Anyway, Rupp did okay, didn’t he? I know he gave away the late foul from which Wayne Rooney curled that sumptuous free kick into the top corner but other than that, alongside Oliver Skipp, I though he had a solid game and showed some decent awareness, touches and that he has a good passing range. I’d say he had a solid 7/10 game and deserves the chance to play there again, next time out.  In the opening games of the season, McLean has fluffed his lines and maybe needs to sit down and wait for a bit, much like Rupp has had to.

Emi Buendia’s return was timely and presumably shows that his attitude and focus are where they should be again, after he missed the Bournemouth game for the same reasons as Cantwell. His quick feet in some tight situations showed that he’s still got it and a neat flick in the build up to Derby conceding the penalty reminded us what he can do and how simply but flamboyantly he can do it.

The fact he seemed to storm off down the tunnel, something SKY Sports made a big deal of, is surely nothing new, is it? He always looks mightily cheesed off when he gets subbed off and so did I when I used to play. I think it’s natural and the fact that he quickly came back and sat down with the rest of the subs shows me that he caught himself and he thought about it and it says something about his attitude. Hopefully it’s nothing more than that and that he’s not played for the last six games we’ve had.

Ben Gibson was another positive for me and even from my front room, I could hear his loud booming voice organising the players around and in front of him. He is clearly a leader and Buendia was on the receiving end of a couple of words, I noticed, when he wandered out of position a little. Considering he hasn’t played for around a year, I thought he looked very good, although I’m tempering that with the fact that Derby offered little forward threat at all in open play. Zimmermann and Gibson looks as though it could be a very good partnership going forwards. The first signs are good.

Max Aarons continued to shake off any post Barca gloom and showed no sign of any disappointment following the breakdown of a possible move to Catalunya. He played well and was unlucky not to score. If only he’d been able to keep that shot down.

In terms of our style of play on the day, all the space was out on the flanks because Derby sat narrow and tight, not allowing us to play through them easily. That meant that crosses were coming into the boxes and there was nobody on the end of them. Xavi Quintilla has slotted in seamlessly at left back and his dead ball delivery is already a potent weapon. He is much better offensively that Jamal Lewis was, isn’t he? He rarely tracks back and looks to get the ball in early. Unfortunately, Teemu Pukki is not the sort of man for this sort of work but obviously, Jordan Hugill is.

I know that we have a problem at number 10 again, due to the injury to Kieran Dowell but if I was Farke I think I’d be looking at how I can get my new £5m striker onto the field for more than the last ten minutes every week. I remember Farke playing Pukki at number 10, behind Jordan Rhodes before Pukki started leading the line. How about, on occasion, doing something similar? Replacing the industrious but later in the game, laboured Marco Stiepermann for Hugill with 20 minutes to go might’ve done the trick.

I’m no coach but it seems sensible to me. Pukki has an eye for a pass and he can link up play, what’s not to like?

Either that or play that formation from the start at Rotherham. A lack of ruthlessness in front of goal cost City here, that and a returning Canary in the shape of David Marshall, who made two excellent saves from Aarons and Hugill to keep the ball out. Without those two saves and if Pukki hadn’t have slipped for the penalty, the game could’ve easily been out of sight by the time Rooney stepped up to take his free kick. He showed that he still has the skills but Derby look in trouble if they’re going to play him as a centre-forward every week. Talk of “no more big money deals” in the current climate at Pride Park made me smile when they’re talking about bringing in Charlie Austin from West Brom in the near future. I bet his salary is very small, just like Rooney’s!

Norwich played well, dominating possession but lacking goals. I saw enough though to encourage me going forwards. With Placheta, Sorensen and Dowell, who will be like a new player when he returns in January, I think the team looks decent. If we could hang onto Buendia or Cantwell, preferably both, then this will have been a decent transfer window and Farke can look forward with positivity.

I think we all can.

2 Replies to “Buendia, Rupp And A Sucker Punch – Plenty To Discuss As Norwich Lose Again”