Could Liverpool Cope With A Situation Like Norwich Are Currently Having To Contend With? 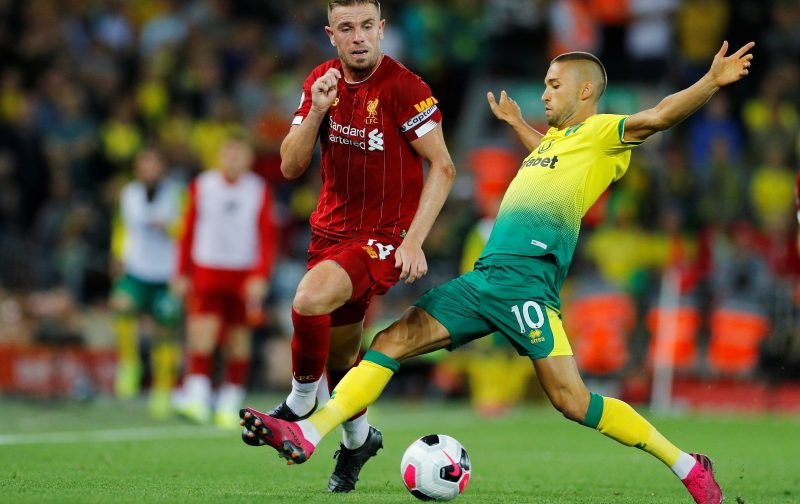 The international break is always a fairly dull time for the average football fan, at least if you’re a fan of a Premier league or a Championship side anyway.

The chances are that your club will have a number of players away on international duty with their respective countries and at the moment, if you’re a Norwich fan then you’re probably keeping everything crossed that the likes of Max Aarons, Teemu Pukki and Todd Cantwell come back without injury.

I mention Todd but as I’ve been writing this, I have just learned that he too is injured and has left the U21 squad.

.@ToddCantwell_10 has been forced to withdraw from the @England U21s squad with a hamstring strain.

Also, @kennymclean66 has returned to the Lotus Training Centre early with a hip problem. #ncfc

The current injury situation has become a nightmare for the club and the news on Wednesday evening that Kenny McLean had left the Scotland squad with an unspecified “niggle” has done little, I suspect, to improve the mood around Colney. That came on the back of Jamal Lewis pulling out of the Northern Ireland squad with a knee problem.

It is as bad an injury crisis as I came remember in over forty years of going to watch Norwich City.

On the pitch, the injuries have certainly been noticed and with only one half fit centre-back (Ben Godfrey has been playing with a hernia) and only three fit central midfielders, one of whom has had to play alongside Godfrey, the choice of options has been severely limited for Daniel Farke in the last month or so.

Norwich have now lost three games in a row since that wonderful September evening when they beat the Champions of England, Manchester City and to my mind, have never really looked like winning any of those games since. You can point to the outstretched boot of Nick Pope at Burnley when the score was still 0-0, or that opening period at West Ham when City had plenty of the ball but failed to score, but the reality is that the Canaries’ domination of the ball is not providing the same dividends that it did in the Championship and that, I’m afraid is the reality.

It’s difficult to judge from the stands because until we have a lot of these players back fit again, there will always be those thoughts of “What if?”

Imagine if Liverpool were missing as many of their squad as Norwich are?

Would they be leading the Premier League table if they were without the services of Alisson, Adrian, Van Dijk, Matip, Lovren, Keita,  Henderson, Wijnaldum, Fabinho and Mane? Oh and what’s that, Andy Robertson has a hamstring strain and is out too?!

I very much doubt it.

If you’re a Liverpool fan and are reading this then just try to imagine that scenario. It’d be a nightmare wouldn’t it? I know that Liverpool will have better quality in their replacements than Norwich but a title and Champions League challenge would surely be beyond them with that level of physio’s room regulars.

Norwich City aren’t looking for sympathy but by outlining the position via the current league leaders, I just think it adds a little context rather than lazily just thinking, well, Norwich are where they should be after eight games.

The international break does give Daniel Farke the chance to reassess his tactics so far and to make a decision as to whether he will stick with them or not, in the face of this unprecedented injury crisis.

I can’t see him changing his outlook too much when you consider that he didn’t change when he played in the same way in the frustrating 2017/18. The following season it all clicked and that led us to where we are now.

Whether or not Farke gets any midfielders back during the international break could help him to decide what happens next. Alex Tettey and Tom Trybull are both thought to be close to a return to first team football and that would be hugely welcome.

Moritz Leitner is not a defensive midfielder. He is a graceful quarterback that needs that defensive foil next to him. He has always played better with a Tettey or Trybull type alongside him and Kenny McLean is not dissimilar, albeit he is a bit tougher on the ball than Mo.

Is any of this down to coaching methods? Certainly the injuries to Timm Klose and Christoph Zimmermann were caused by bad tackles and Onel Hernandez basically fell up his own stairs but groin strains and hamstrings are different. Perhaps it is just bad luck.

If Tettey and Trybull are able to return for Bournemouth then one of them is probably going to have to play and that will be without having played for several weeks, which could present even more problems.

I read an interesting article by Michael Bailey on The Athletic today where Michael asks the question of whether Farke might decide to be a bit more pragmatic in his approach, under the current circumstances and it’s a question that I’ve asked before here and that was before the injuries were really biting like they are now.

Even with a fully fit squad, the trip to Bournemouth would be a tough one but as things currently stand, it could be horrible. Here’s hoping that one or two of these injuries aren’t too bad and that we can get a few more of our senior players back sooner rather than later because although the league is only eight games old, it will soon be a quarter done.