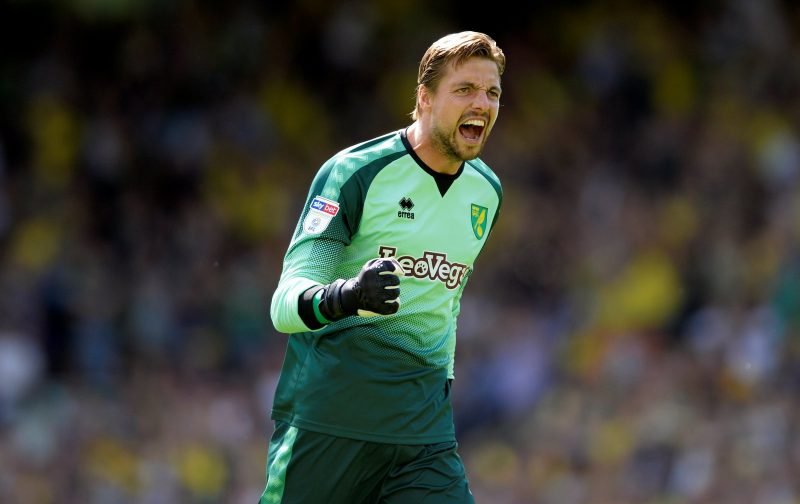 With the first East Anglian derby of the season fast approaching this coming Sunday, I think it’s fair to say that after the 1-3 League Cup win over Cardiff, a few of the so called “fringe” players have done their chances no harm at all.

The likes of Ben Godfrey, Max Aarons, Emi Buendia, Todd Cantwell, Dennis Srbeny and even Michael McGovern will be anxiously waiting to hear from their Head Coach as to what the team will be on Sunday.

Godfrey had an excellent game at centre half on Tuesday, alongside Christoph Zimmermann who also did well and is another to add to the list. Both are big lads and for the most part, comfortably dealt with the Bluebirds’ aerial assault. That came on the back of Daniel Farke saying that Godfrey has “all the ingredients to be an outstanding centre back, world class” as quoted by the EDP.

Godfrey does, of course, have Grant Hanley and Timm Klose currently ahead of him in central defence and might find himself having to wait for his chance. I expect Farke to revert to Klose and Hanley at Portman Road.

Max Aarons had another good game and got the Canaries’ third goal at the Cardiff City Stadium, giving his Head Coach another decision to make. The way that Ivo Pinto played against Leeds wasn’t great, but do you throw a young lad like Max into the cauldron of an away derby game? Again, I think Farke will stick with experience and go for Pinto.

Todd Cantwell did well enough but could’ve really stamped his name on the result with two late one on one chances but he failed to convert either of them. That will have been disappointing for Todd but, as I’ve written before, I’d be more concerned if our players weren’t getting into these positions. Finishing chances is hugely important but you have to get into position to be given the chances and in this game, luckily, it was irrelevant.

Dennis Srbeny did himself a power of good with a brace of goals and an all round good game too. His has been a stop start Canary career, so far and even with these two goals, I fully expect that Jordan Rhodes will start on Sunday. Having said that, Rhodes needs competition to push him and if Dennis can start doing that then it’s good for everyone.

Emi Buendia made his first start for the club and from what we’ve seen in his brief cameos and this start, he’s a baller who likes a tackle. He looks ready to play now and surely a regular starting berth is on the horizon. Why not give him a go at Portman Road? He could be a bit of a surprise package, I would imagine, to Paul Hurst so might well do some damage. Much like Onel Hernandez, he likes a tackle so could play on the other flank to Onel. He can also play centrally.

The most interesting position for me though, is that of Goalkeeper.

Michael McGovern put in a timely reminder of his abilities at Cardiff. I say timely because let’s be honest, Tim Krul has been having a nightmare lately.

His two errors against Leeds let the visitors have a 2 nil head start and he also struggled against West Brom, conceding a long ranger from Jay Rodriquez. Would you drop Krul for McGovern?

Daniel Farke has conceded his number one was “rusty” after the Leeds game and although McGovern has had his critics while at Norwich, he is experienced, as experienced as it gets and he has continued to be Northern Ireland’s first choice.

He saved us a couple of times at Cardiff and unlike the question mark over a youngster like Max Aarons, there will be no such problems about throwing a man like McGovern into the white-hot atmosphere of the derby.

I suspect that Farke will go with Krul on Sunday but it could well be make or break for the Dutch international.  If he comes through that test with flying colours then it will do his confidence no end of good but if he makes a howler and Ipswich were to, god forbid, win because of it, then Farke may have no choice but to drop him.

I think I might be tempted to play McGovern. We’ll see what Farke does.

These questions are all nice problems to have though, for any manager/Head Coach and it’s certainly put our gaffer in a much better place because of the Cardiff win. Ipswich have started the season woefully but only marginally worse than us. I wouldn’t expect an attractive game of football if you’re a neutral because, as ever, the result is all that matters.