Days Like This Are Why I Am A Norwich Fan 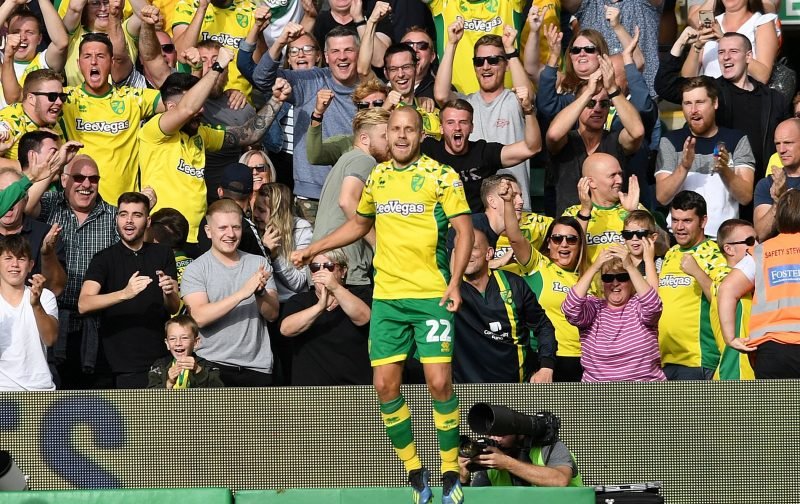 What we witnessed yesterday was the ultimate confirmation of why we are all football fans.

The incredible feelings of highs, lows, highs again and the ultimate feeling of victory is why we keep coming back to Carrow Road year after year after year.

I’ve been going to NR1 to watch football for over forty years and I have many great memories of famous victories. In this day and age though, football has changed immeasurably from what it was in 1977, when I first stepped foot inside Carrow Road. What hasn’t changed though is the feeling of excitement that I still get waking up on a match day and that feeling of optimism when I walk up the steps and out into the stadium, no matter who we are playing.

In recent years though, the sort of feeling that I felt yesterday has been in short supply at Norwich City.

Under Paul Lambert’s guidance in the Championship promotion season, these sorts of late wins were common place. I remember sitting four rows up in the Snake Pit in February 2011, when Henri Lansbury scored a 94thminute winner against Millwall and the players celebrated in a huge heap of arms and legs in front of us and with us.

That win, nearly eight years ago, continued the Canaries’ unlikely promotion tilt then and yesterday’s win over the Lions has done the same now.

As I said though, that sort of feeling is quite rare. I suppose the last time I felt it was when Martin Olsson scored in injury time to beat Newcastle as both teams headed for the Championship trapdoor but at that moment, on that day, the possibility of staying up because of it looked and felt tangible.

Prior to that, Simeon Jackson’s 96th minute winner against Derby was even more important because it put Norwich in the box seat for promotion. So you can see what I mean when I say this sort of feeling is quite rare.

Trying to take in everything that went on yesterday is a big task. The fact that the referee, Jeremy Simpson had an indifferent game was key to serving up the ingredients for the “game of the day.”

Millwall’s first goal came from a ridiculous free kick, given by Mr Simpson for a high boot from Alex Tettey. The Millwall player (I don’t know who) actually stopped to almost waist height to head the ball and Alex challenged him and won the ball. I don’t think he connected with him and that gave Millwall a chance to pump the ball into the danger area.

The fact that they then won a couple of headers that ended in a goal is a moot point because City’s defence and especially the usually reliable Christoph Zimmermann, were rocked by that level of physicality. Millwall looked to “play the percentages” at every opportunity and I can’t help but think that Grant Hanley’s return will be welcome for just this type of test.

Then we had a goal disallowed for offside. I’ve watched it back a few times and I’m struggling to see the infringement. If it was Klose then it’s fractional and it certainly wasn’t Zimmermann.

After that we saw a sublime equaliser scored by a player in the form of his life. The fact that Teemu Pukki was signed on a free is almost unbelievable because he is a real find. You can look for years to find a player for whom it all just clicks into place. I know I keep saying it but the last time we had a striker this prolific was Grant Holt. I can’t gloss over yet another penalty miss though, a third in three games by three different players. Mo Leitner cheekily suggested afterwards that he’d better take the next one, perhaps he should. He is German, so should know a bit about taking them.

Talking of Leitner, I thought his passing was a little off. Not by a lot and sometimes even Wes Hoolahan had an off day and when such high standards are the norm, it becomes more noticeable. Having said that, Mo made up for it with that 20 yard drive that went in off the post to snatch back the lead. What followed after that was little more than chaos.

The City chants of “WE ARE TOP OF THE LEAGUE” were in full flow when straight from the kick off, Millwall equalised. Defensive errors exposed on the ground this time and it left City’s centre backs looking at each other with Tim Krul blowing a gasket. Krul then misplaced a throw, in an effort to get back in the game quickly and suddenly we’re losing with 7 minutes to go.

My lad stood up and at 12 years old shouted “COME ON, YOU’RE THROWING IT AWAY.

I had to agree.

Daniel Farke acted and brought on Vrancic and Rhodes and that turned the game as City went 3-5-2. First Buendia, for Rhodes and then Vrancic, for Pukki, provided exquisite passes to unlock a Millwall backline that by then had five men in it.

After Rhodes had equalised, I would’ve taken it right then. “Blow the whistle ref, I’m done.” A point from such a position in such a manner would’ve been decent enough but this team do not give up. My lad turned to me and said “Dad, I’m shaking” and he showed me his hands. He was.

Millwall got a 96th-minute corner and fancied their chances. They are, after all, statistically the most dangerous team in the league from corners and it seemed that they weren’t interested in just keeping the ball.

They swung the ball into the mixer and seven passes later, it was in the back of their own net. Simply incredible and Carrow Road erupted. There is no need for a drum or band of any sort to improve the atmosphere if the team keep playing like they currently are.

Neil Harris moaned about extra time added on past the 6 minutes announced but City made the most of the visitors’ blatant time wasting since the 30th minute, just like Derby in 2011, and used it to score. Sometimes you kick Neil, sometimes you get kicked.

Daniel Farke was on the pitch, I think he slipped over. He was quickly up onto his knees and giving it fist pumps as we all went absolutely mental. Feelings like this are, as I say, the whole reason that we love football.

We stayed in the ground afterwards until every player had left the pitch, cheering and applauding. I had shouted myself hoarse and I’m feeling it this morning but it was well worth it.