How Should The Football Season Finish? A Few Suggestions 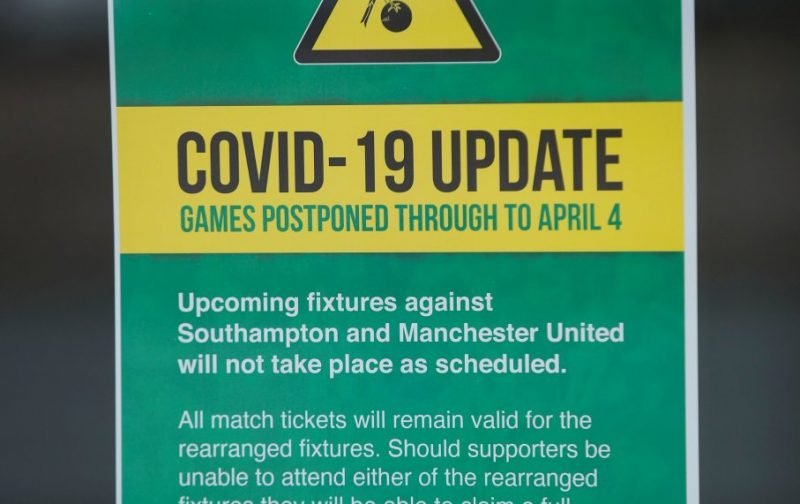 How should the football season finish?

That’s the biggest of questions being currently mulled over and over by those in charge of leagues, clubs, players, sponsors and fans alike. Not to mention the TV companies who have more than a casual say in match scheduling.

There are literally hundreds of questions to be pondered over and just ending the season now, making it null and void, doesn’t really compute, either for fans or the money men. So what should happen next?

Well, I’m quite happy to give you my two pence worth although please bear in mind that this is from a fan’s perspective not a company or sponsor that have a financial interest.

In terms of the Premier League, I have a fairly simple and straight forward perspective on this, depending on the extent of the COVID-19 spread.

If the virus can be contained relatively quickly and doesn’t end up being as bad as the media are predicting then we just pick up the games again in June, playing twice a week potentially on occasions. This will, of course, depend on the postponement of the European Championships in the summer. I’ve read that the decision to do this has already been taken and that today’s meeting to discuss it will effectively be to rubber stamp the decision, with working groups having been going through the possible outcomes for several days now. Quite frankly, with Euro 2020 set to take place in twelve different countries this summer, anything other than a postponement would be ridiculous.

So, that would afford the Premier League the potential time over summer to play the games but, and this is a big BUT, there are football clubs with commitments at their stadiums this summer other than football. Many clubs, Norwich City included, have concerts lined up like The Killers, who come to Carrow Road on 1st June. The Las Vegas band, who I have tickets to see, are embarking on an outdoor tour of English football stadiums starting on May 26th at Doncaster Rovers’ KeepMoat. They then visit, Falkirk, Old Trafford, Carrow Road, St. Mary’s, The Emirates Stadium, Ashton Gate, The Ricoh Stadium and finally, Middlesbrough’s Riverside.

Later in June, Westlife are also taking in a few football stadiums, including Norwich, Cardiff, Inverness and Plymouth. Those concerts will be tough to cancel for football reasons alone and in terms of the revenue they will bring in for smaller clubs, those outside the Premier League, it could be literally crucial. There are all sorts of other things happening too. The Tottenham Stadium is hosting Anthony Joshua v Kubrat Pulev on June 20th and the West Ham Stadium (London Stadium) has concerts, Athletics and Major League Baseball throughout the summer.

West Ham find themselves in a much trickier situation than most though, due to the fact that they don’t own their own ground. They rent it for £2.5m per year on a 99-year-lease. If the season doesn’t finish on time then the Hammers will potentially have to ground share somewhere else to play the remaining games due to the commitments of stadium owners, E20, to these other events, which will cost millions of extra pounds – no wonder that Karren Brady, the West Ham Chief Executive has been so vocal about ending the season now, declaring it “null and void.” That’s before you consider West Ham, as it stands, are only out of the bottom three in the Premier League table on goal difference.

The way I would finish the season is as follows:

Liverpool, as much as it pains me to say it, have been the best team in the Premier League this season and should be given the title. Yes, they’ve wobbled a bit lately but they only need two more wins and they would’ve got them if the season had continued. Not even Manchester City could argue that. In terms of the future though, those annoying Liverpool fans that I work with, the ones born in Norfolk who’ve never been to Anfield, could have the first title in their lifetimes and yet the rest of us could always just say to them “Yeah, but you only played three quarters of the season.”

It would drive them crazy.

In terms of relegation, nobody should be relegated. There are too many teams separated by too few points and with too many games left to play to impose relegation on any team. This is a Norwich blog and if you’re not a Norwich supporter then you’re probably thinking “Well, you would say that, wouldn’t you?”

That’s fair comment but Norwich are still playing well and we have games against three teams above us, it’s still all to play for and, there’s so much at stake for all of the clubs down there. A loss of financial income, naturally, but also the potential inability to keep hold of their best players would be just as painful for those relegated in such circumstances. There are also big questions surrounding who plays in Europe next season.

Now, these are extraordinary circumstances and therefore they require extraordinary solutions. Turning to the Championship, Leeds and West Brom could be promoted to the Premier League, making a 22 team league next season. There has been much talk over the years of expanding the Premier League and this could be a useful, if forced time, to try it out. The top two teams in the Championship are well clear of third placed Fulham and both would no doubt make a legal challenge to the EFL for a potential loss of £150m each, if they weren’t promoted. I’m not sure the EFL could afford to lose such a case, in fact I know they couldn’t.

The playoffs in the Championship and the European places in the Premier League could perhaps be taken care of by, well, playoffs, behind closed doors if necessary. A handful of games to settle these most tricky of issues. It would also add an extra team to the Premier League, so maybe, for one season there could be four teams relegated.

The bottom of the Championship is more problematic as just 2 points separate 17th placed Stoke from 22nd placed Charlton Athletic. Maybe the idea I outlined above could go on throughout the leagues, with no teams being relegated for one season and perhaps not playing the League Cup as well, just for one year to help with the schedules next season. There’s just too much at stake.

As you can see, there are questions everywhere and the potential for legal battles everywhere, as well. If the season cannot be completed, and this is my preferred solution, then something like the above should happen. At the moment, with talk of the “peak” for the virus being in 9-14 weeks’ time in the UK, then it doesn’t look like we’ll be watching football or anything else for quite a while. The football season may well not even start again in August, perhaps having to start in the autumn in 2020-21.

This is, as I said at the top, from a fan’s point of view and it takes into account nothing concerned with the money side of the game. What will Sky and BT show if they don’t have any live sport to broadcast. Re-runs? I bet their subscriber numbers would rapidly drop off until the games start again. I wouldn’t mind betting that these two big TV companies would suggest games being played behind closed doors, so that they could broadcast/stream them live. Would sponsors demand refunds from football clubs or TV companies? Would clubs outside the Premier League go bust due to a lack of revenue? Would lenders or the government be prepared to help these clubs out?

Football without supporters would be deeply unsatisfying but it assumes there will be enough players to actually play the games. What do you do, take teams into quarantine, away from their families and the outside world, only emerging to play matches before ushering them back into their oxygen tents?

There are so many variables here that it’s nigh on impossible to predict anything. Describing these events as unprecedented in the last 100 years doesn’t do them justice. The last comparable event like this, Spanish Flu (1918-20) infected 500 million people around the world and death toll estimates were anywhere between 17-100 million people, depending on which report you read. The world was very different then though.

I don’t have any definitive answers for you but you’ve read my thoughts, I’d be interested to hear yours.