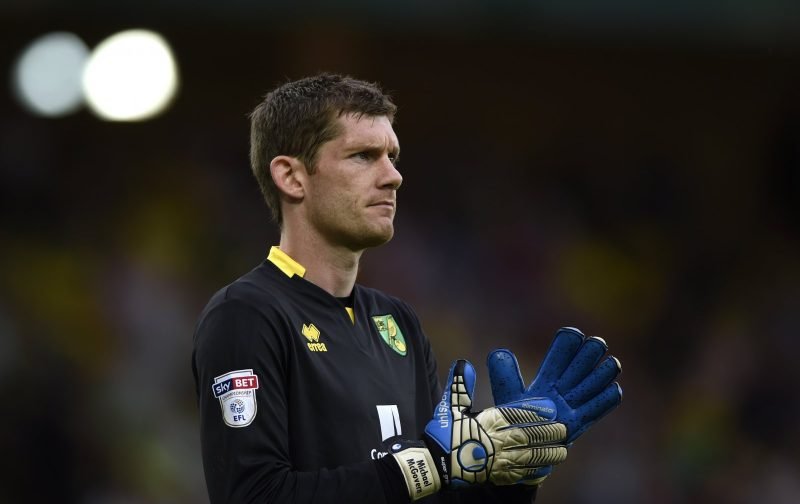 Norwich City will be forced to look for a new goal keeper in this January window, after Daniel Farke announced the grim news that Michael McGovern will miss the nest 12-16 weeks with the hamstring injury that he suffered against QPR.

💻 Daniel Farke is about to begin his pre-Barnsley press conference. Updates here ⬇

Talking to the media at his usual pre-match press conference from Colney on Friday, Farke gave all the team news ahead of today’s match with Barnsley and as usual, Vital Norwich Forum  stalwart, FC Bears was watching. First though, this is what Farke had to say about McGovern and the return to Tim Krul to the side.

“If you want to be successful you need a good keeper. We have the best in Tim Krul but you also have to be prepared for the worst case scenario,” Farke said. “We have no problems with naming two keepers in the short term.

“But after this game we have two weeks before we play Cardiff. It is always difficult to find a proper option in January but with Micky more or less out the whole of the season, or a major part of the run in, of course we have to have a closer look on the market.”

“It would make sense to do some business. If it is possible.”

“We won’t take just anyone to make up the numbers. We have younger keepers here but if we can find a reliable option, a good experienced option, then we will try to pull the trigger. If not, we go with our own lads.

“It is our responsibility to have a closer look and prepare for all scenarios. You cannot expect to go further on with no injuries to the keepers.

“Even a small muscle injury in this league can mean six or seven games out. For Tim it has been even longer than that.”

And now, here’s FC Bears’ take on this news and the rest of the press conference:

McGovern will be out for 16 weeks after pulling his hamstring. Must have been a bad one. Late call if Krul will be thrown in but happy to go with Daniel Barden.

Placheta is able to return to the squad but not the starting line-up against Barnsley.

Rupp and Stiepermann will miss tomorrow but probably back for Cup third round game against Coventry.

As for the players with longer term injuries, Farke said the club will continue to give Sam Byram time to carry out his rehab.

Bali Mumba and Onel Hernandez are ahead of Adam Idah in terms of their rehabilitation.

There’s a chance in January that they will be involved in training. With Adam, it will last perhaps two weeks longer but he’s on a good way so more or less good news.

Rupp seems to have a continuous hamstring problem, doesn’t he?

I think DF will be desperate to get Tim Krul in goal. I think Krul will play. What a boost that’d be.

I think Zimmermann should drop and get the left footed Gibson back in. Get a left back on the pitch too as we are constantly targeted down our left because of Sorensen.

Maybe move Sorensen to his actual position. The guy has looked good attacking and on the ball.

I’d like to see us with an actual winger and Martin looked good before he tired in his last game for us. Move Emi/Cantwell to number 10 behind Pukki.

I see that four Barnsley players are out of the game after testing positive for COVID. Is there a chance the game could get called off? DF said he doesn’t see why it should.
And finally, Barnsley boss, Valerien Ismael and our own Daniel Farke are friends, having spent 10 months together in 2014, studying for their UEFA Pro licences. They have remained in touch ever since and both men are keen to see the other again. Talking to the Yorkshire Post, Ismael had this to say about his former classmate.
“We did our Pro Licence together in 2014 in Germany and spent 10 months together in the classroom and we have been in contact. I will be delighted to see him.
“We have stayed in touch before I got the job at Barnsley and spoke two or three times a year. Just before I took over, I spoke to him about the Championship and it was a good thing as he has a lot of experience of English football.”
“Valerien Ismael is a great guy. I saw him for twelve months more than my family in Germany. He was a fantastic player and is doing a fantastic job. Since he arrived at Barnsley, it’s been outstanding. I think they’ve had 30 points from 15 games which is a title-winning average. There’s just one team with more points from those games… it’s us!”
Nice little dig at the end there, DF!
OTBC