Interest In Todd Cantwell With Four Days To Go? 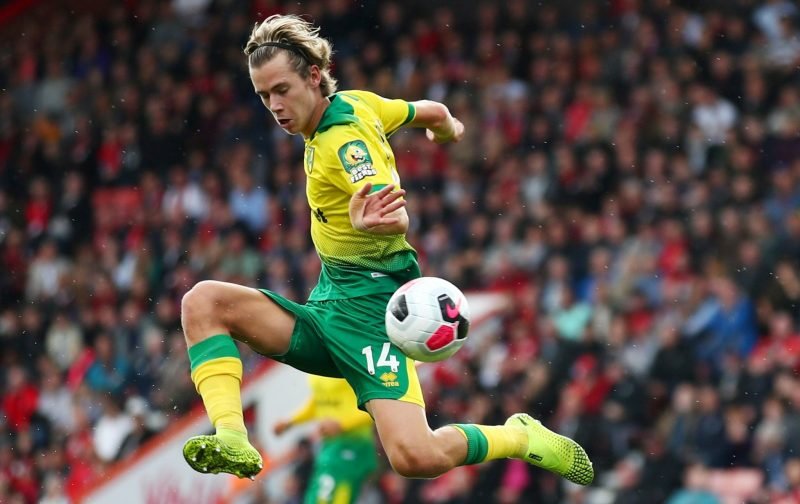 The late transfer dealings that have involved Norwich City have been a little disappointing for the average fan but not exactly surprising.

At the start of the transfer window, and with a flurry of “Welcome to…” tweets from the Canaries’ official Twitter account, Norwich did all their business. It was done refreshingly early too but with one cautious eye on the fact that there were always likely to be outgoings too.

The so called Crown Jewels of Carrow Road, Todd Cantwell, Emi Buendia, Max Aarons, Jamal Lewis and Ben Godfrey were always going to be the subject of interest and be in-demand. As it turned out, only Godfrey, Aarons and Lewis were the subject of offers with two of the biggest clubs in World football, Liverpool and Barcelona, getting short shrift from Stuart Webber with their ridiculous offers for Lewis and Aarons.

Aarons got his head down and has proven a maturity beyond his years, as did Godfrey, who was also linked with everyone from Bayern Munich to AC Milan. Both players will no doubt have known that a big move will come, just keep doing what you’re doing. For Max that big move is still on the horizon but for Godfrey, a club record move to Carlo Ancelotti’s Everton feels right for all concerned.

Lewis eventually got a move to Newcastle but for Cantwell and Buendia, the waters were and are, murkier.

Both players are supremely talented footballers and both found themselves excluded from the match day squad at Bournemouth due to a perceived lack of focus in training. “I’d rather play the kit man…” etc.

With just four days left in this transfer window there is still yet to be a bid for either player. Both players’ agents have been doing their best, I’m sure, Todd’s maybe more than Emi’s but the reality is that both lads are still here, something that Todd seems to be coming to terms with, judging by his social media in the last few days.

Over the last 24 hours, the Yorkshire Post have published an exclusive interview with Leeds United’s Director of Football, Victor Orta in which he acknowledges that Cantwell is a player that they have scouted but does that mean anything, really? I’m sure that every club scouts lots of different players but it doesn’t necessarily mean they will all be bought.

“We analyse all the players,” he said.

“We know them really well, their clubs were our rivals, we analysed [Cantwell] in the Premier League. But it’s like a lot of players we’ve analysed.

“It’s difficult. They are players we analysed, we have information and then we need to think about the possibility.”

I’ve also read that Cantwell has been considered by Fulham but is that really a forward step for him? Leeds United, I get. That would be a step forward. Now that Leeds are in the Premier League, have a decent, stable set-up in charge of things and they, of course, have Marcelo Bielsa making decisions on the pitch. I could understand that sort of move.

No disrespect to Fulham but it’s a club not at the same level as Leeds and they (already) look highly likely to be relegated next May.

With so few days left in this window, I can only imagine that Stuart Webber is keeping everything crossed that they don’t have to dip into the market to replace either Cantwell or Buendia if a big money bid comes in. With only domestic players now available, it would surely be very tricky. Having said that, the same domestic only window should keep things serious if money is to be offered by any club.

Will Todd Cantwell go to Leeds United by Friday at 5pm?

The way that Leeds have looked to do their business so far, my gut feeling is that they would’ve already bid for him if they were seriously interested. Sometimes these things can fly under the radar, so it could be happening as I write but if it is, they are leaving it very late and after the signing of Raphinha and the break down of their move for Michael Cuisance, I get the impression that Leeds really want a central midfielder now, not a centre attacking type, like Todd.

We’ll see soon enough but if he doesn’t move on, Todd needs to get his head down and back up those Instagram posts with action on the pitch because as Ben Godfrey can testify, a big move will come if you just keep doing what you’re doing.

2 Replies to “Interest In Todd Cantwell With Four Days To Go?”