James Maddison – The Jewel In The Norwich Crown 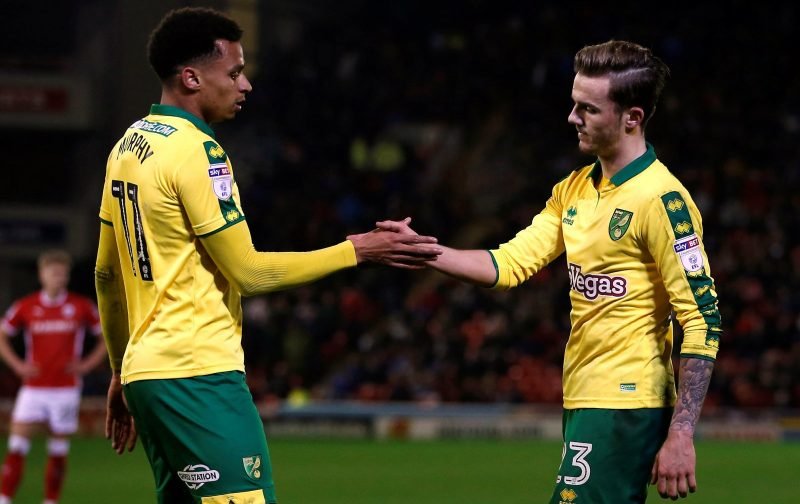 Norwich City are set for another interesting summer transfer window with James Maddison in particular looking like he will be the subject of plenty of interest from the Premier League.

The 21 year old midfielder has been a revelation for City this season and having notched his 15th goal of the campaign against Villa on Saturday, you have to wonder quite where we would`ve been without him.

He is without doubt, the jewel in the Canary crown and speculation has been rife for months about whether or not he will leave Carrow Road in the summer and if so what his destination will be, not to mention how much is he worth?

Stuart Webber will need to cut the wage bill again in the summer and I imagine that the big earners like Alex Tettey, Wes Hoolahan, Steven Naismith, Russell Martin and Matt Jarvis will be top of his list.

The first two would be more than welcome to stay and we already know that Tettey has been offfered a new deal. There`s no word on whether he’s prepared to take the wage cut that City are offering or anything at all regarding the future of Wes, a player who still looks like he has plenty to offer.

The big question though surrounds Maddison.

Does he want to stay? Do the club want to try to keep him or are they looking to cash in?

In around ten weeks time, those questions will perhaps have clearer answers. The Canary nation would I would wager, to a man, want to keep him. I`d want to get rid of Martin, Naismith and Jarvis which would surely give us the manoeuvrability in the wage bill to keep him but things are rarely that simple with such a talent.

He is sure to have been scouted by almost every Premier League team. They will all know about him and if one of those teams wants him, as we saw with Alex Pritchard, it will be almost impossible to keep him.

Pritchard of course, wanted to leave and reportedly told the club that almost as soon as he was fit again in November. It would be pointless to try to keep him.

What we don`t know is what Maddison or his agent think about a summer move.

You have to be aware of standing in a young player`s way and with such a fragile career, where you`re only one bad tackle away from it all ending, it`s a fine balance. The fee being offered could of course blow away any thoughts City may have of keeping their star player anyway.

If I`m honest, that seems a bit cheap and I`d be slightly disappointed if he was sold for that. I`d value him at £20m+, bearing in mind there`s a sell on fee to Coventry due.

I think the chances of keeping Maddison are slim at best and I have no doubt that he will go on to become a top, top player but his destination will be important to him. It`d be easy to sign for a top four club but rarely play and realistically, I think Spurs or Liverpool might be his best options there.

He would need to play and develop further in line with natural progression and either of those two clubs should give him chances to play. The talk in the stands at Carrow Road is that a deal to sell him to Spurs is already done, you`ve probably heard that yourself but a move to a club like Leicester, comfortably mid-table should see him a regular starter and in the long run that would help his development. It`s also close to Coventry and therefore, home, family and friends.

I`m struggling to remember the last time that Norwich had such a promising, valuable youngster in their squad and after scratching my head, I reckon that`d be Craig Bellamy, who ironically went to Coventry for £6m back in 2000.

The next five games seem destined to be his last in Canary yellow so best enjoy him while we can.