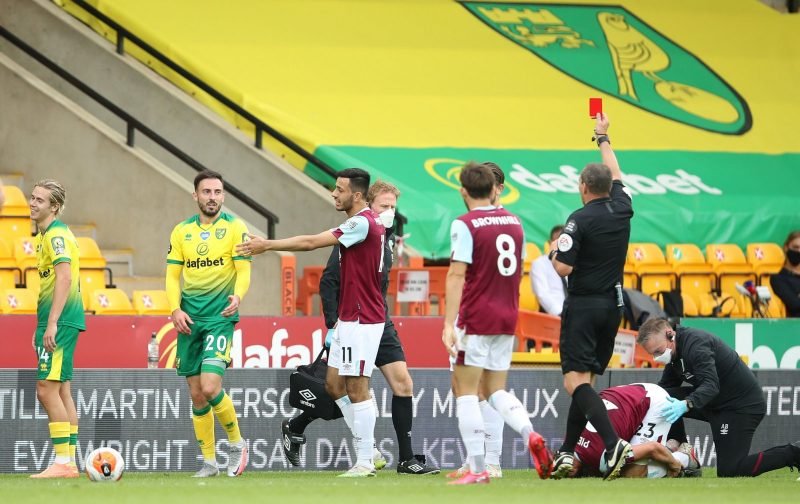 Even by Norwich City’s standards this season, this was a terrible way to lose a game of football.
Two red cards in the space of thirteen first half minutes put paid to any chance that Norwich might actually win a game again at this level.

The first 25 minutes had seen Norwich on the front foot and dealing with Burnley well enough in an evenly contested match. For all the power of Burnley’s giant players, the Norwich way of passing neatly and around them did have plenty of joy and City should’ve taken the lead in a passage of play that saw Clarets’ keeper, Nick Pope parry Ben Godfrey’s header before the out-stretched foot of James Tarkowski sliced wide Alex Tettey’s follow-up.

What followed just summed up the way things have gone this season and underlined the naivety of some of our squad.

Emi Buendia had tussled with Ashley Westwood a few times already prior to the 35th minute, potentially already raising his Latin temperature levels. When they tangled again though, Westwood played Buendia like a fiddle and cajoled the little Argentinian into a red card.

Westwood ended up on the ground and the ball had gone, as Buendia looked to get back in the game himself, Westwood grabbed at his legs and stopped him getting away, surely a yellow card in itself. As he got up though, Emi banged an elbow onto the top of his back with a fairly low level of force in clear frustration and Westwood, naturally, made the most of it.

He fell to the ground in stages but it was enough to give Buendia a problem. VAR examined the footage over and over again, as we could see the footage they were looking at on TV. It didn’t look good in slow motion at all, when the level of force used looked far worse. As it was, the VAR man couldn’t decide after watching it ten times, so asked the referee, Kevin Friend to go and have a rare look at the pitch side monitor.

He watched it twice in very slow motion, lacking context of the first tussle and Westwood’s actions and showed Buendia a red card.

It was pretty soft but Buendia has no-one but himself to blame. If you raise your arms like that then you give the referee a decision to make. I’ve got no complaints. Westwood set a trap, having already teed him up, and Buendia stumbled headlong into it. Well played.

Ten minutes later and it was two red cards as Josip Drmic launched himself, both feet off the ground, into Erik Pieters to try to regain his own heavy touch. It was right in front of the Burnley bench and you could see and certainly hear the whole bench erupt with Sean Dyche leading the shouts.

It looked bad, although replays showed that there fortunately wasn’t much contact. It was another straight red card and there can be no complaints from Norwich. It was reckless and he was out of control. A momentary wry smile crossed Daniel Farke’s face as the Swiss international, who had received some very unpleasant comments earlier that day on Instagram, trudged off down the tunnel.

Nine men against eleven is never going to work out well and two minutes later, Chris Wood was able to score with an unspectacular overhead kick that went in off his shin from a cross into the box. That was effectively that.

The second half? I can’t tell you much about that because I took the dogs out for a walk with Mrs T. Huffing and puffing as we went. I understand that Timm Klose had to be replaced by Christoph Zimmermann at halftime due to injury and that he and Godfrey looked decent together. I also later saw that Onel Hernandez was unlucky not to score but for an excellent Nick Pope save but that ultimately, after all the good work in the second period, Ben Godfrey’s poor touch saw him score an own goal.

Next time out, we will be at the Etihad Stadium for David Silva’s farewell game to Manchester City. It doesn’t look good, does it? They will want to beat us after our highlight of the season when we beat them 3-2 at Carrow Road in September. Pep Guardiola’s Galacticos will all be playing for their places in the upcoming Champions League campaign and they will all want to win for David Silva. Incidentally, if you play Fantasy Football, I’d get Silva in your team for the final day because he’s going to play and he will be on penalties. He’s actually a shout to be Captain of your team, as well.

A 5-0 score line or less would probably be seen as a decent result for us.

Whether we see either Drmic or Buendia in a Norwich shirt again is unknown as both will now have to serve three match suspensions. In Emi’s case, if that was his final appearance in yellow and green then what a disappointing way to finish your Norwich career, eh?

This game though, was a capsule of Norwich City’s season. Starting out with so much early promise, followed by a miserable ending. Gutting.