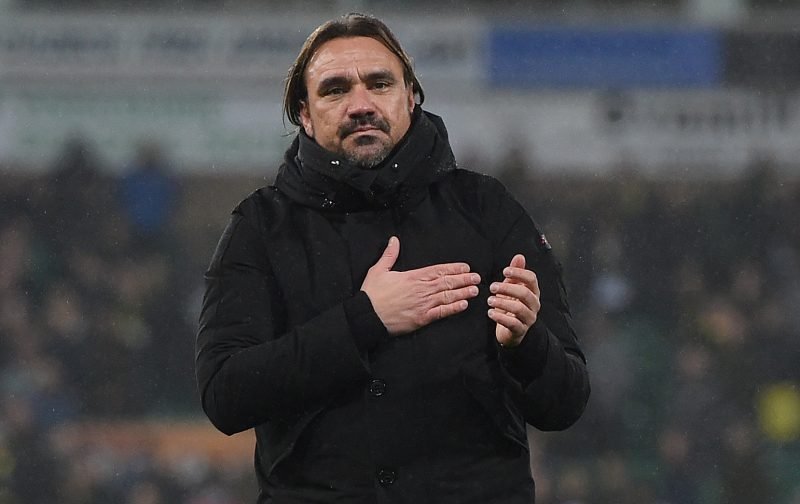 A lot was said before this clash of the Sky Bet Championship’s top two sides in the media both local and national.

The local press for each club became embroiled in some Twitter shenanigans with both the Yorkshire Evening Post’s Phil Hay and the EDP’s Michael Bailey both catching some flak from opposing fans.

We had the #WelcomeNorwich from some Leeds fans with suggestions that the Norwich team coach being bottled and attacked. It was a minority though with plenty of sensible fans opposing the idea and not wanting to give the EFL a chance to impose sanctions.

There is seemingly an underlying feeling of victimisation from the Leeds fans whereby they think that everything and everyone, including all the referees, are against them.

There are a number of tweets from their side that allude to this but the reality is of course, completely different.

I’ve compiled a few of the best tweets from both sides for you to have a look through, including the Norwich team arriving with a number of grown men waiting to shout “GRASS, GRASS, GRASS” at Daniel Farke and his team.

Leeds fans using #WelcomeNorwich to suggest there could be trouble for Norwich fans going to ER on Saturday & to be fair, many are against it, saying it’s a handful of supporters being idiots, don’t judge them all

Now apply that to #Millwall please. It’s a minority not all of us

Pathetic this #welcomenorwich bollocks. Any concerned Norwich fans travelling with kids welcome to park near my house and I'll walk them up to the ground and back again after.

Wow! With a #WelcomeNorwich like that our players must have been so scared no wonder they were put off their game and didn't do quite as well as we expected. Well done. #NCFC #SomeSarcasmInMyTweet https://t.co/fhlmh0GuAo

???? | What an atmosphere at Elland Road ahead of today’s game! #ALAW pic.twitter.com/lpoyXahttt

Nowadays when terrorist attacks and knife crime is a real worry, you get this bellend pushing for a #WelcomeNorwich perhaps he’s too young to remember the 2 Leeds fans fatally stabbed in Turkey.All over a game of football #lufc #Ncfc pic.twitter.com/p7Yva49jB6

Not quite the Estadio Monumental, Buenos Aires….as we were lead to believe #WelcomeNorwich

it's the game that the nation wants to see, two big guns head to head #leedsnorwich @Joedesouza93

– Won seven free-kicks (previous record this season for a #ncfc player was five) and made joint most tackles in the game (5)@FocusImagesLtd pic.twitter.com/Cdmc8GzQXd

Full focus on Sunday now another massive game in front of our fans … pic.twitter.com/AnAp15C0ga

Bad for the English game though https://t.co/P6YBXZf1vW

The club record for fewest away league defeats in a season is 4️⃣ in 2010-11.#NCFC #OTBC #Canaries pic.twitter.com/lzeRvijEV7

Grant Holt did it twice:

No dripping. No giving Radz grief or calling players out. They’ll know they fucked up. Game came down to individual errors and we made more. A lot more! Fair play #Norwich. You defended well and took your chances. That young Aaron kid you’ve got is a class act btw.

To be fair, Bielsa nailed his research and analysis on the #NCFC #LUFC game.

As a Leeds fan i can do nothing but appluad that @NorwichCityFC performance tonight. #lufc #ncfc

All joking & banter apart, Norwich were the better side today. Came with a game plan and executed it to perfection. Hopefully we will both be up there come May. All the best for the rest of the season. #lufc #ncfc

In August, the divide in quality between #lufc and #ncfc couldn’t be larger. The former looked streets apart of the latter.

However, those predications have shifted. Last night, it was only one side who looked like champions.

You just concentrate on being 6 points off top spot after tomorrow’s game cunty #lufc #ncfc https://t.co/PV7HH2qVYJ

Buendia one of the best players I’ve seen in the championship, Onel Hernandez is just ridiculously quick, Vrancic absolutely quality too. The two young fullbacks Lewis and Aarons were excellent too. #NCFC

Fair play to Daniel Farke, stuck at it after a tough first season and it looks to have paid off. Might be an unpopular opinion amongst my fellow Leeds fans but I really hope Norwich go up (with us obviously????), they’ll be a delight to watch in the Premier League. #LUFC #NCFC

Will that be in the form of a letter? https://t.co/nSMe2AmZ5Z