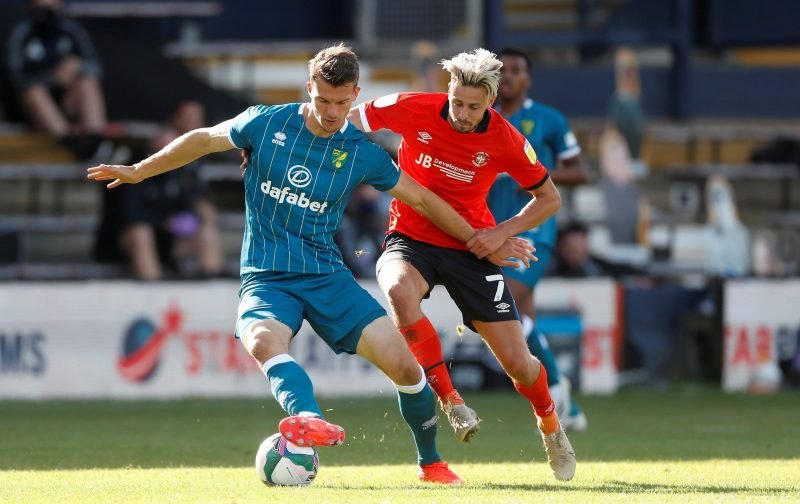 I suppose that Daniel Farke does have plenty of excuses as to why Norwich were beaten 3-1 by Luton – around fifteen of them actually but here we are, dumped out of the Carabao Cup in the first round (again).

The large number of international players missing from City’s squad did, of course, play their part but it didn’t stop my Luton Town supporting mate, Matt, from sending me a few SShhhhh emojis via WhatsApp.

In the grand scheme of things this is not a huge problem, although it did provide the unwelcome extension of a record losing run for the Canaries. Farke was quick to point out that such a decimated squad did of course play it’s part in the way that this game played out but there will be no such excuses in, say, a month’s time.

Norwich will be seen as one of the big fish in this league and the opposition will always be upping their game when faced with the sight of yellow & green (or petrolino) coloured shirts. The way that Luton approached the game tells me everything I need to know about how some of the Championship’s lesser lights will line up.

The Hatters dropped off and allowed City to have the possession whenever they lost the ball, challenging the visitors to try to break them down and without their best players it was, at times, a struggle for Norwich. Especially in the first half.

New youngster Bali Mumba had most of the space and a couple of chances in that first period and he looks to be a useful addition at the tender age of just eighteen. In the absence of Todd Cantwell, Onel Hernandez and Przemyslaw Placheta, it was nice to see Josh Martin also making the most of his chance.

Kieran Dowell took his goal well but it was the cheap surrender of the ball at the back which again cost Norwich. The arrival of Ben Gibson and Xavi Quintilla will hopefully add some defensive nous to the City back four which hasn’t seen a central defensive addition since the arrival of Grant Hanley three years ago.

Add that to the return of Tim Krul, Ben Godfrey and Max Aarons and City should be better placed to defend once the league starts at Huddersfield next week. You’ll notice that I left Jamal Lewis out of that comment as he appears to be on his way to Newcastle United.

The loss at Kenilworth Road is a reality check, a reminder to us all that this is not going to be as easy as some on social media keep predicting. Yes, Norwich have a decent looking squad now, certainly stronger than it was last season in the Premier League but that is just on paper and players on paper do not win football matches.

The way that Luton approached the game, despite manager, Nathan Jones, knowing the squad issues that City had, tells you all you need to know about how lots of teams will line up against us this season.

He was right to do that too. Despite the high profile absentees, Norwich still had some players with big reputations in the team.

If they can keep hold of them, and remember that the transfer window is open for another month yet, attacking players like Emi Buendia, Todd Cantwell and Teemu Pukki, and that’s without the mentioning the new additions as well, will cause plenty of problems for teams like Luton when the two clubs meet again in the coming months.

Yes, there were valid reasons why we lost this game, and the score line belies the closeness of the match, but they will not stand in the coming weeks and with that losing run hanging over them, they need to win a game of football, and soon.