Michael McGovern Will Step In To Fill Tim Krul’s Boots – Does That Worry You? 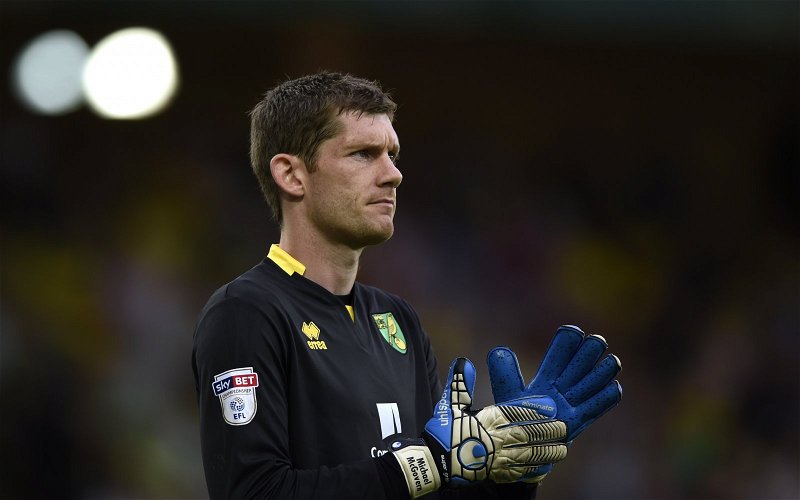 The prospect of losing Tim Krul for a prolonged period of time worries me, I can’t lie.

City’s number one suffered an injury to his left thigh muscle on Tuesday night in the first half at Stoke and he had to be substituted before the break, being replaced by back-up keeper, Michael McGovern. I know from what I see on social media and from within the Vital Norwich Forum  that lots of fans do not rate McGovern.

I think, personally, that he is a lot better goalkeeper than those people might actually think and certainly the messages of support from his team mates after the game bear that out, as well as the standing and respect that “Mick” has in the squad.

Some goalkeeper let me tell you! https://t.co/9UaoWurZvi

He is, of course, vastly experienced with Northern Ireland and he played throughout his country’s 2016 European Championships and qualifying campaign. He was the Hamilton Academical goalkeeper at the time and he’d let his contract run down, allowing his former manager and team mate, Alex Neil to sign him on a free for Norwich City. I remember in particular an  incredible personal performance that he put on against Germany in the Euros that summer. A series of outstanding saves saw NI advance to the last 16 due to a healthy goal difference which was preserved almost single-handedly by McGovern.

Tim Krul though is the best goal keeper in the Championship, backed up by the stats, by some margin. Krul has the best “goals prevented” stat in the league this season – Goals Prevented is the number of goals a keeper would be expected to concede from the quality of shots he has faced, minus the actual number of goals (excluding own goals). The higher the number, the better the goal keeper is playing personally.

Krul’s “Goals Prevented” score is currently 4.8, with the next best being Tim Dieng (QPR) on 4.2 and then followed by Brice Samba (Forest) on 3.4. Tim also has the highest save percentage, 81% of any keeper too. Only Boro (6) and Swansea (7) have conceded fewer goals than the Canaries’ eight.

I don’t fear too much about McGovern’s shot stopping or his catching or coming for crosses. My biggest concern is his distribution and his ability to play with his feet. Krul has played the most passes of any goalkeeper in the Championship this season in his own half (388) which when compared to those that ended up in the opposition half (98) helps to illustrate the way that City use Krul’s ability on the ball. It’s the same way that Liverpool play with Allison Becker and Man City do with Ederson.

McGovern is more limited by his ability in this regard and it will be interesting to see if Farke asks him to play as Krul does, or, and this would be sensible, to try to limit that a little and play more to his new first team keeper’s strengths. I am sure that Ed Wooton (Goal Keeping Coach) will be coaching all his keepers in Krul’s mould. It’s a team philosophy that will be trained throughout the age groups at Colney but McGovern is Tim Krul’s number two for a reason.

The two goals that McGovern conceded after he came on and Emi Buendia was sent off were not his fault, more the fault of some slack defending against an opponent with their tails up.

The two big questions, I think, are will Farke expect McGovern to play like Krul does and how long is Krul going to be out for? If it turns out to be around six weeks, as some have speculated, then that’s around ten games – a quarter of the bloomin’ season! Hopefully it’s not that long.

We showed amazing spirit last night to get another 3 points..
Personally a little set back with the injury but I won’t be out for to long.. #9unbeaten #ncfc 🤞🏻💪🏻🔰 pic.twitter.com/OiXz2fEDeh

One last thing. I’m sure we’ve all noted that there have been two goalkeepers on the bench in recent games, McGovern and young Daniel Barden, much to the annoyance of some. Recent comments from Ben Gibson after the Stoke game hint that Krul’s injury might not have been a sudden, unexpected surprise.

“Tim was trying to play through a little bit of a muscle injury, so it wasn’t easy for him to distribute the ball in the same manner we want. We weren’t as slick as we usually are but we found a way.”

Makes you wonder, doesn’t it?