Newcastle’s Two Record Signings Must Be Shackled By Norwich 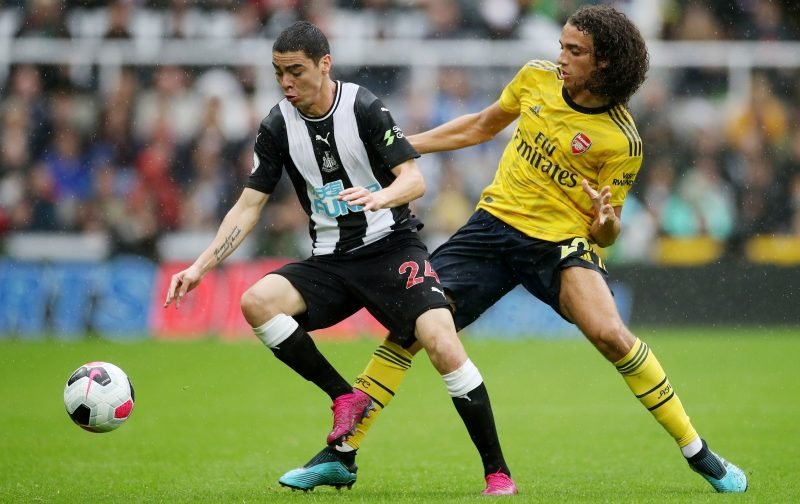 The Magpies were narrowly beaten 1-0 in their opener at Arsenal last Sunday, with City having suffered a slightly heavier defeat than that in a 4-1 loss at Anfield.

The result on paper looks a lot worse than the performance actually suggested though and you’ll know that if you watched the game.

Norwich opened up Liverpool on numerous occasions and actually had more shots on the Reds goal at Anfield than any other team in the last two years and crucially, Teemu Pukki got his first Premier League goal.

So it’s not all doom and gloom after what was essentially a “free-hit” last week.

We are not fighting with Liverpool though, our battle to stay in the league will be against other teams, like Burnley, Southampton, Brighton, Sheffield United and today’s visitors.

As ever with Newcastle, there is an air of upset among the fan base at what is going on behind the scenes regarding the continued ownership of the club by Mike Ashley.

Over the summer, I read an interview with Ashley in which he said he was “not wealthy enough to own this football club” which is some statement when he’s reportedly worth around £2.5 billion pounds.

He basically said that he’s up against countries in terms of spending power and I suppose that’s right when you consider that Manchester City are owned by Sheik Mansour bin Zayed Al Nahyan, a member of the ruling family of Abu Dhabi in the United Arab Emirates.

It also underlines the size of the task that Norwich City face as they struggle to compete with the money washing around the Premier League, hence the need for a different way of doing things.

You can read how the Canaries are attempting to do that in more detail by clicking here.

There has been a change under Ashley though in the last six months or so. In January, he finally opened the purse strings and signed Paraguayan playmaker, Miguel Almiron for a reported £21m from Atlanta United in the American MLS league.

Almiron is very, very quick and made a name for himself as a number 10 with extraordinary pace, power and an eye for goal, despite being slight in stature.

He scored 21 goals in 62 appearances for Atlanta over two seasons and provided many more assists, he also has a hammer of a left foot, as you can see.

However, he hasn’t settled just yet in the North East and he has yet to score or provide an assist for his new club – yet, being the key word. People keep saying that “it’ll come as soon as he gets his first goal” but he’s clearly struggling a little, even missing a penalty in pre-season against Preston North End.

He signed under Rafa Benitez and struck up an understanding with  Salomon Rondon and Ayoze Perez in the second half of last season but all three are now gone. I wonder if he feels that he’s been a little misled, having spoken in such glowing terms about Benitez when he first signed?

There are signs of an understanding with the Magpies’ new £40m striker, Joelinton, a player that Ashley smashed his transfer record for again this summer but with his season cut short by a hamstring injury against Southampton in April, Almiron needs to get back in the saddle and quickly.

Joelinton is also yet to score for his new team and could also probably do with a first goal or assist to settle the nerves of those watching in black and white from the terraces.

He was signed from Hoffenheim in the summer and he’s only 23, looking ripe to explode onto the world stage. He joined Hoffenheim in 2015 on a five-year deal where he didn’t, at least according to his stats, initially set the Bundesliga on fire.

He went out on a two-year loan to Rapid Wien in 2016-18 and scored 15 goals in 60 appearances. Last season he was back at Hoffenheim and scored 11 goals in 35 appearances in all competitions with 7 goals coming in the league.

It’s a lot of money but he is highly rated and I suppose it’s the going rate for a player of his age and promise. For me, these sorts of fees underline the superb work that our Recruitment Team have done in finding Teemu Pukki and Emi Buendia.

We just can’t compete financially and if Mike Ashley doesn’t think he’s rich enough to own Newcastle then what chance have Delia and Michael got?!

That’s why we’re having to go another way.

Steve Bruce wasn’t a universally popular choice to replace Benitez despite being a Geordie boy, having previously managed Sunderland, and he will be desperate to get a first win under his belt and so will Daniel Farke, we all will.

There’s no such thing as a “must win” game in August, although three points would be most welcome with Chelsea (H), West Ham (A) and Manchester City (H) our next three league games after this.