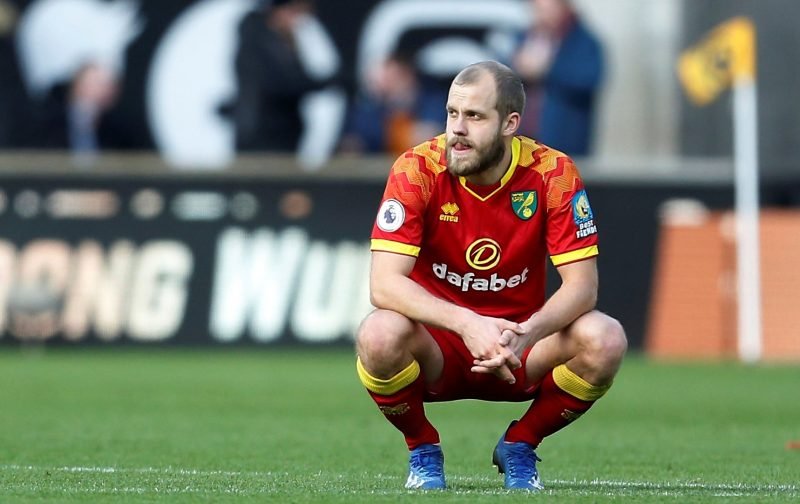 Unless West Ham pull off what looks like Mission Impossible on Monday night against Liverpool, there will have been no real harm done to Norwich City’s increasingly unlikely chances of an escape from relegation, other than another game slipping by.

With only Brighton managing to grab a point of the six teams directly above Norwich this weekend, it’s not season defining to lose at Molineux. However, the manner of the defeat worries me more than anything else.

We all know that Wolves are a good side. They’re flying in the Europa League and they’re only five points off a Champions League place in the Premier League.
Despite having nearly sixty percent of the ball, Norwich managed only six shots to Wolves’ nineteen during this match. They may have started brightly but were soon punished by a quick fire Diogo Jota double and with Raul Jimenez adding a third on 50 minutes, meaning the game was effectively over as a contest at not much more than the halfway point.

This set of players, virtually the same starting XI that did so well against Liverpool last week, looked well short of the belief needed to mount a realistic relegation fight only eight days later. With favourable results elsewhere this weekend, to blow the chance to make some much needed gains, so weakly, was a real disappointment. The Wolves hardly broke into a sweat as they swatted aside a tepid Canary effort.

In the early part of the game, Teemu Pukki’s near post flick and Kenny McLean’s drive were about as good as it got. McLean stung Rui Patricio’s hands with a strong 25 yarder but it was straight at the Portuguese international keeper.

Once again though it was defensive lapses that caught Norwich with their pants down as Jota grabbed his brace. It was all too easy for Matt Doherty to find Jota and he just shrugged off Max Aarons before firing through Tim Krul’s legs for the first.

City were then undone again as a short corner saw a ball eventually fired across the six-yard box for Jota to tap in from close range. Having watched Wolves use the short corner tactic so often in the game at Carrow Road in December, you might’ve thought that the squad would’ve worked on defending them in the week but it barely looked that way.

Krul then made a stunning save from Ruben Neves in the last knockings of the first half when he somehow got a hand to Neves’ 20 yard screamer, pushing it onto the bar. It looked a goal all the way and again reminded us as to why Ralf Fahrmann is warming the bench and Krul is being watched by Ronald Koeman with Euro 2020 on the horizon.

There were no changes for City at the break, which won’t surprise anybody who wasn’t at the game and is reading about it here for the first time, and within five minutes the game was done. Jota nearly grabbed his second hat-trick in four days but his shot struck the base of the post, rebounding nicely though for Jimenez who scored from only a couple of yards out.

Norwich struggled to create much during the next forty odd minutes as the clock ran down and Wolves’ thoughts turned back to the Europa League, resting both their goal scorers.
Daniel Farke attempted to get back in the game with a double substitution on the hour mark with Lukas Rupp and Ondrej Duda making way for Emi Buendia and Josip Drmic.

Buendia was unable to make much of an impact, other than getting booked for failing to retreat for a late free-kick but Drmic did look bright, as he did against Liverpool in a late cameo appearance, giving Pukki some much needed support. At the other end, Krul made another good late save, this time from Doherty to keep the score at only 3-0.

Eleven games remain and I can’t help but think our Head Coach needs to try something a little different. We’ve looked decent more often than not, although not so much here. Away from home, we are still the only team not to have secured a single point from a losing position this season and after 27 games that is a very bad looking stat.

Drmic has looked lively in his recent late appearances so why not think about a change of formation? With the likelihood of having three, maybe even four, fit centre-backs soon, why not consider three at the back and two up top? Farke has rarely been a man for wholesale changes but I’m starting to get fed up with watching City get beaten by playing attractive football each week.

This is a tough scenario for all concerned, both players and supporters and the games don’t get any easier, with our next opponents being Leicester City at home under the lights on Friday night. The reality of this performance was that in my opinion, none of the team here gave anywhere near their best and that perhaps, is the most worrying thing of all.

You simply can’t keep having your goalkeeper being your best player every week and expect anything other than what is happening at the moment.