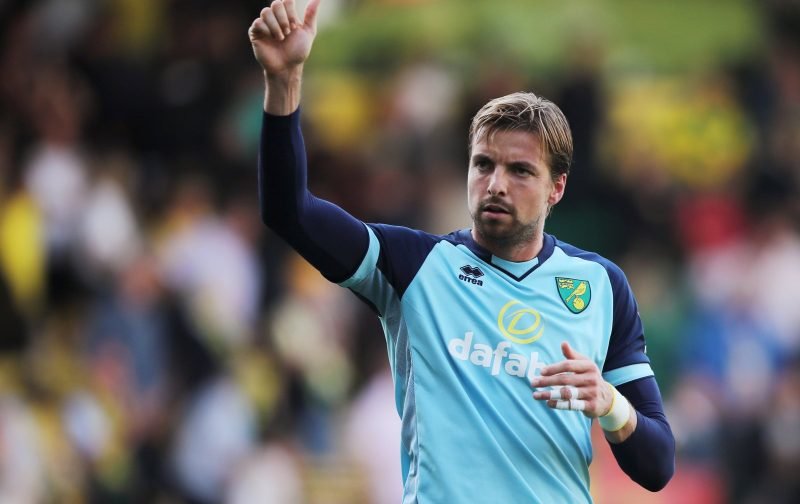 Daniel Farke will be keeping his fingers crossed this week after two more of his squad suffered injuries at Turf Moor on Saturday against Burnley.

Alex Tettey limped off just after Chris Wood had opened the scoring for the Clarets and was replaced by Moritz Leitner on 13 minutes.

Tettey injured himself by making a routine pass, with no other player involved and he was seen leaving the stadium with his right thigh heavily bandaged, after the game.

The return of Leitner to fitness was timely, as City also have Mario Vrancic and Tom Trybull out injured, with Ibrahim Amadou having to fill in at centre back.

“It didn’t look that good for Alex” Farke told the Pink ‘Un.com. “He made a pass and felt a strain in his quad or his groin. We have to wait what the doctor says. It seems like it is a muscle injury.”

With Grant Hanley having returned to full-fitness, perhaps the most sensible thing to do for the upcoming trip to Selhurst Park is to play Hanley next to Godfrey in defence and move Amadou into his natural position because I can’t see Tettey being fit enough to play against Crystal Palace.

Unbeknown to most of the watching fans, Tim Krul injured himself during the warm-up when he felt back pain. He needed painkillers to get through the match, although you wouldn’t have known from his performance, which was as we have come to expect from Tim.

“Tim had to cancel his warm up 30 minutes before kick-off and we had to get him through the game with pills,” Farke added.

“He was not able to move as he would have wanted, although you wouldn’t realise this from his performance. At half-time he was really struggling and was not sure if he could go on. When he cooled down in the changing room he felt the pain even more.

“I told him just to give it 10 or 15 minutes and thankfully he got through, but we have to wait how it settles down. He was one of our last leaders so we needed him. I totally trust Michael McGovern if he had to play but Tim was in his rhythm and we hope he is available for Crystal Palace.

“Michael is experienced enough. I am more concerned about other positions.

“I hope Tim will be able to go for the next game and we have a good outcome with Alex. We need to calm down the load this week.”

Krul’s deputy, Ralf Fahrmann was not on the bench as he has a groin strain and he was due for a scan at the weekend. It seems unlikely, if that’s correct, that he will be fit within a week, so if Krul’s back doesn’t settle down then Michael McGovern could be facing Wilfried Zaha and co on Saturday.

I’ve seen a lot of fans moaning on social media about that but remember, McGovern is a very experienced keeper. He may not be so good with his feet as Krul, and that is a problem, but he knows what he’s doing.