Norwich Face Defensive Nightmare For Rest Of The Season 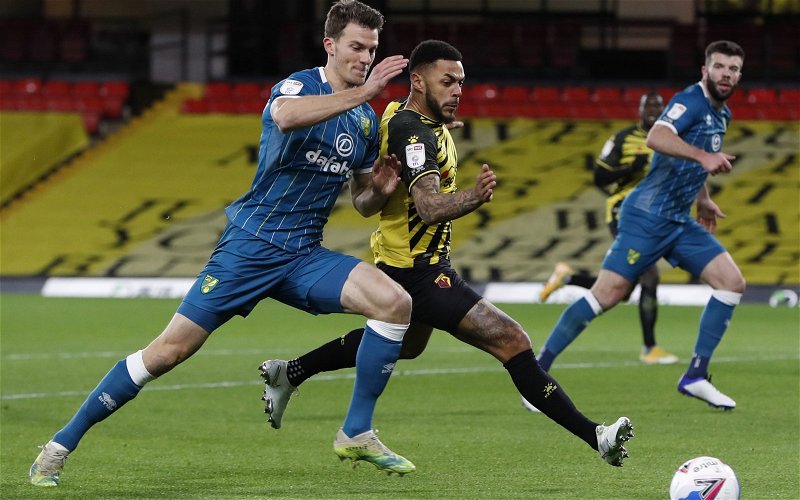 Norwich City will be without Christoph Zimmermann for the next four to six weeks, Daniel Farke told the assembled media via his now usual video press conference on Thursday lunchtime.

💻 Daniel Farke is about to address the media for his pre-Preston press conference. Updates here ⬇

Zimmermann had been all set to replace Ben Gibson, whose season was ended by an ankle ligament injury in the Canaries’ last game against Blackburn, but now the replacement needs replacing after suffering a hamstring strain last Monday and the cupboard is now bare in terms of specialist, experienced centre-backs.

🗣 DF: "Sadly, Zimmermann is out. He felt on Monday in the end of the warm up some problems with his hamstring.

The question for Farke now is who does he play alongside Grant Hanley? Assuming, of course, that Hanley returns fit from international duty with Scotland and passes a COVID test.

The options would appear to be Alex Tettey, Jacob Sorensen or Andrew Omobamidele with only the youngster being a natural born central defender. The issue is his lack of experience in the Championship though and that makes me think that Farke will turn to either Sorensen, who acquitted himself so well at left-back earlier in the season or the elder statesman of the squad, Alex Tettey.

I am aware that Sorensen has played at centre-back for his previous club and for Denmark U21s, so he does know how to play the position, he also has youth on his side with Tettey likely to struggle with the upcoming and punishing game schedule. If I was Farke, I would go with Sorensen and then have the other two lads on the bench.

Norwich have flirted with danger in central defence all season with their decision to only go with three specialist, senior players for the position this season. Grant Hanley has remained fit throughout while Gibson has mainly been his partner and when he has missed out, Zimmermann has filled in. Now though, we’re down to just one fit centre back (fingers crossed) with the finishing line in sight.

One thing that is certain for me is that whatever happens in the next eight games, and let’s hope we can get over the line, then next season we cannot go into the Premier League with only three senior centre-backs. Last time we were there we mostly only had one fit player there, Ben Godfrey, and as Liverpool have discovered this season, the loss of your best defenders leaves you horribly exposed. For the reigning Champions that means they might not make the European qualifying places but is that comparable to what relegation means for a club like Norwich?

The rest of the team news for Preston is patchy. Tim Krul, Orjan Nyland and Onel Hernandez all arrived back a little earlier and have passed COVID tests but the other five players away on international duty have to be assessed and passes their own tests.