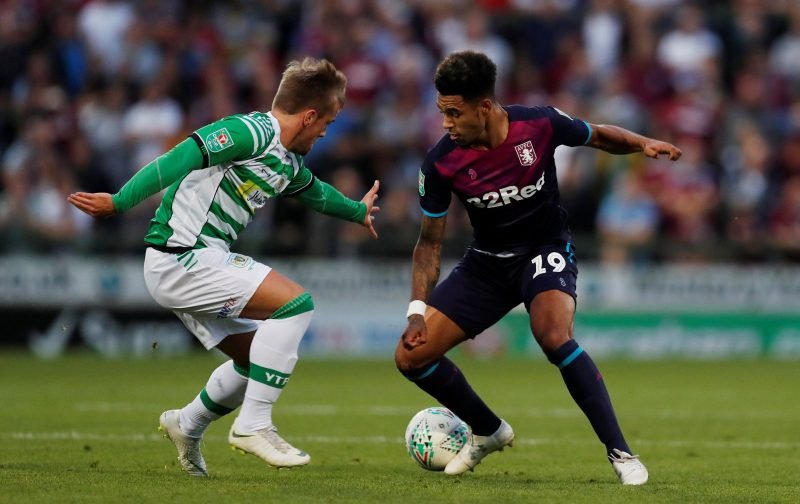 Norwich City have been heavily linked with Aston Villa’s young winger, Andre Green according to The Mirror’s live Transfer Blog, as reported here by This is Futbol.

It seems that the 20 year old Villa Academy product will have his game time restricted due to Villa’s policy of signing/loaning in big name players.

Last season, Steve Bruce opted to loan in Robert Snodgrass from West Ham and he has just succeeded in agreeing a season long loan deal for Everton winger, Yannick Bolasie.

Bolasie has been reported in numerous media quarters to be earning £50k per week and it is also being reported that Villa will be covering all of that massive salary. Six weeks ago they couldn’t pay tax bills and after a swift take over they’re chucking the money around again.

So, this means that young Andre could be frozen out as you would assume there is pressure from everywhere on Bruce to play Bolasie.

Green has made five appearances for Villa so far this season but was not involved in Saturday’s 1-1 draw with Reading. He is widely thought of among the Villa fans as an excellent prospect, having been with Villa since he was 9 years old.

Yesterday, City were linked with Holstein Kiel winger, Kingsley Schindler but an English born winger would be preferable, I would’ve thought, due to the number of German players we have in the squad and needing to keep on the right side of the homegrown players rule.

The loan window closes on Friday, so if anything is going to happen, it will probably be soon.