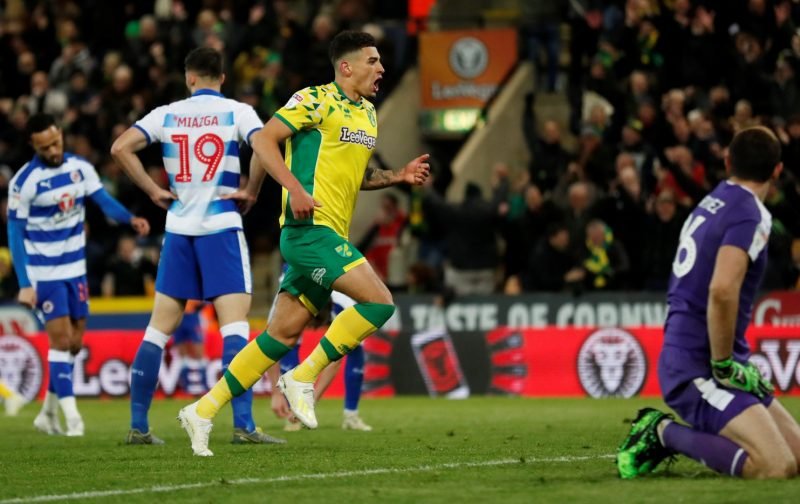 Norwich City were unable to make it nine wins in a row against a stubborn Reading at Carrow Road on Wednesday night.

The Royals came to Norfolk fully intent on not committing past the halfway line and just sitting back and looking for the odd counter.

Birmingham (and others) have tried the same thing but the difference this time was that Reading pulled it off, scoring two goals and being a generally well drilled outfit.

The two goals were arguably gifts from Norwich via either a wayward pass or, in the case of the second goal, some less than tight marking.

So close to being nine points clear of third place, only to have it snatched away at the death. A scenario we’ve played to our own advantage several times throughout the season.

Hopefully this will spur our boys into beating Wigan on Sunday in front of a 5,000 strong travelling yellow army.

Anyway, on to the point of this article and a round-up of reaction from Twitter…

Handy little kick up the butt. I’m sure they’ll be wishing they could play again today. Hopefully we’ll move past it by tearing Wigan a new one ????

Stiepermann has to keep it by the corner flag with only 40 seconds left. Why he runs towards the goal and let it go out for a goal kick is beyond me. If he keeps it by thr corner flag, we win!

Hernandez should do much better closing down Rinomhota in the last few seconds of the game. He attempts a half arsed tackle and then makes no effort to stay with him. I'm surprised how nonchalant he was considering the importance of the situation. Oh well. We go again on Sunday

I seem to be in the minority but I thought #ncfc played quite well tonight. They had a few more sluggish moments than usual but in all honesty, had the game ended 4-0 nobody would have batted an eyelid. Keeper had a stormer; we missed at least 3 sitters. Not much to worry me.

I’d have absolutely taken a point on 85 minutes. I’m crushed having got one at full-time. Football. #ncfc

Another immense performance from Zimbo tonight. Great header. Couple of fantastic challenges, particularly the one where he won the ball and avoided conceding throw in a single slide. #ncfc

FWIW, I reckon we're two wins from having enough to win the league. Would be surprised to see both Leeds and Sheffield United gaining much more than 2 PPG.

Woke up still feeling gutted. A disappointment hangover. Not for the result but for the players who gave everything to drag us back in front. They deserved that win. Those boys are magic. #NCFC

My ears are ringing, like they usually after a loud music gig. Think it’s from the second #NCFC goal celebrations tonight. Was nuts!

Funny old game that. Can’t have it all our own way though and a point stops us going into panic mode ????
Cheers #bcfc for taking points off both Leeds and Sheff Utd this week ????

2-2. A point nearer the objective. In an uncertain world, some things are a given. #ncfc pic.twitter.com/PEluVKxWlW

Moan, moan, moan. What is wrong with some people? Yes it was a disappointing result in the end but my goodness, what drama? It’s been a lot of years since I heard Carrow Rd explode like it did when those two goals went in at the end.

We just don’t know when we are beat!!! Zimbo you beauty!!! This team man!!! #ncfc #otbc pic.twitter.com/r1od1GRcGm

Let’s be honest Hucks. Norwich have been fantastic all season. And will get promoted as Champions!!! https://t.co/3pz3q0NPDU

1) Kenny McLean; made more key passes (7) than any Norwich City player in a game this season

2) Tom Trybull; played 93 successful passes out of 94, the best completion rate (98.9%) of any #ncfc player to attempt more than 20 passes this season

Probably in the minority, but last night’s match just makes me love this season even more. For drama, exhilaration and entertainment, I can’t remember a season like it. The Prem will be a very different experience so I’m just going to savour every moment #ncfc ????????

Blues can complete a hat-trick of favours this weekend in that they can finally relegate Ipswich ????

4pts good return from last 2 away games but not happy with some individual performance tonight! Fleck missing & Norwood poor to name but a few. All it comes to is that Birmingham just have our number, that is all. #TwitterBlades

Out of form bottom half teams when they play against Leeds #lufc pic.twitter.com/MbvQJYHNQv

Preston proving that the ONLY Cup Final in this frikking league for EVERY club is Norwich city.. Leeds have it so much easier as teams simply don’t raise their games against tinpot clubs, even if they are 2nd for less than 24 hours #LUFC #ncfc https://t.co/7bYMqPFzT9

What a joke! Preston play like Real Madrid on speed against #ncfc but when a giant behemoth of a club like #lufc and their astounding fanbase rolls into town they just crumble!

Well, it's now a 5 game mini season. And we have a 1 point head start. #lufc pic.twitter.com/W5j7CXFfin

So near and yet…

Still. Only 1️⃣ team since 1992-93 has reached 9️⃣0️⃣pts and not gone up automatically.

Norwich City now have 8️⃣5️⃣pts – meaning 5️⃣ more gets them there.

Most points gained in any 35 game spell in a single Championship season over the last 10 years:

That dark green line is a nice bit of context for the aftermath from tonight. #ncfc pic.twitter.com/S3qT7X05jz

???? "It was a brilliant workload and really good performance but one of those days where you have to say it was not the fair result.” #ncfc

Who's ready for another game? ???? #ncfc pic.twitter.com/mMOlpDb6kf

DF: “This result is a bit of a joke. Just one team was playing. We missed so many chances. They had two strikes on our goal all game.” #ncfc

Tough to take but its another point towards the prize – bring on Sunday @NorwichCityFC #ncfc #otbc pic.twitter.com/BZKwdzJmnm

Perspective, We march on #ncfc pic.twitter.com/AoG8kskSQr