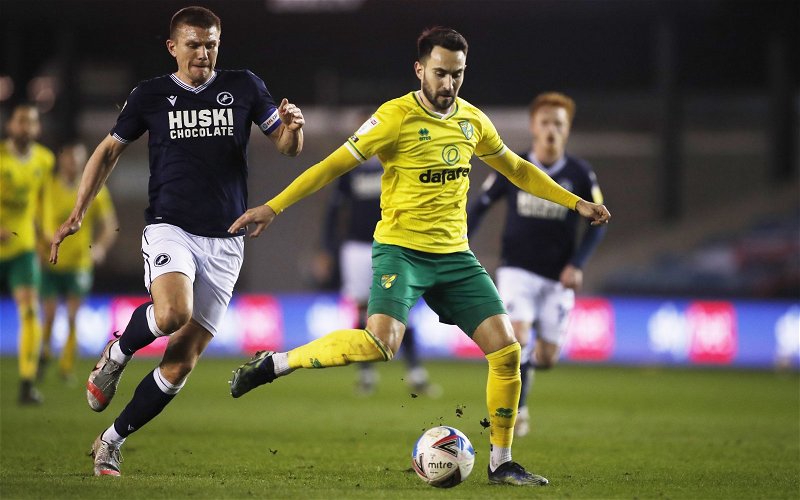 Norwich City look set to be without midfielder, Lukas Rupp for the rest of the season.

Talking to the media via video at his usual pre-match press conference, Head Coach Daniel Farke presented the disappointing news about the unlucky German’s injury misfortune.

Rupp joined the Canaries just over a year ago in the January 2020 transfer window from Hockenheim, for a small reported £500k fee. A player of some class, he was unable to do much to stop his new side going into a tail spin and ultimately, relegation though.

Often played out of position, due to injuries of others, I always had the feeling that he would be a very tidy player and so it turned out at the start of the 2020/21 season when he forged a partnership in central midfield with Oliver Skipp.

He played the first eleven games in all competitions before injury got hold of him. Up to that point, he was playing very, very well, keeping Kenny McLean watching from the bench. After that though he struggled to get back in, being used mainly as a second half sub due to the form of Skipp and McLean and he suffered a hamstring injury in March that due to a reoccurrence looks likely to end his season now.

“Bad news with Lukas Rupp, he has a new hamstring injury. He will miss the next three weeks, it’s doubtful he’ll be involved for the rest of the season.

He’s been struggling during the rehab process. We’ll assess if there are other problems.

When he’s in his rhythm, he is a top class player. He has lots of experience and is very good with the ball. He’s played well in many games this season.We hope that he can join us fit for next season.”

Rupp has made 25 appearances this season and it seems unlikely he’ll make another.

In other news though, Norwich have no new injury issues after the 7-0 drubbing of Huddersfield Town on Tuesday night. Adam Idah and Michale McGovern are close to returns to the first team squad ahead of Saturday’s match at Derby.

Derby are the only team to beat Norwich at home this season and they only managed that due to a rearguard action, a missed (slipped) Pukki penalty and then a late, great Wayne Rooney free-kick, his last in English football before taking over as the Rams’ manager.

Derby have a few injuries and the Canaries are soaring with 32 points from their last 36 games. The promotion run-in has shown no pressures for Farke’s men, unlike Brentford and Swansea who have both choked and thrown away their chances of automatic promotion.

Watford are still winning but have to play Norwich, Brentford and Swansea in their last five games. Mind you, they made short work of Reading last night with a 2-0 win over the Royals – they have also found form at the right time.

I’m pretty confident that Farke will select the same XI that beat Huddersfield in mid-week and why not? Everybody had a good game and as Farke would say “The team are in their rhythm” so they deserve the chance.

You probably already now, but if Norwich beat Derby and Swansea and Brentford both lose then Promotion could be sealed today. There’s a few big variables there but the way those other two are playing, it could happen. Failing that it’ll definitely come because the only way is up for Norwich City!