Norwich Showcase Their Latest Young Star – What Next For Adam Idah? 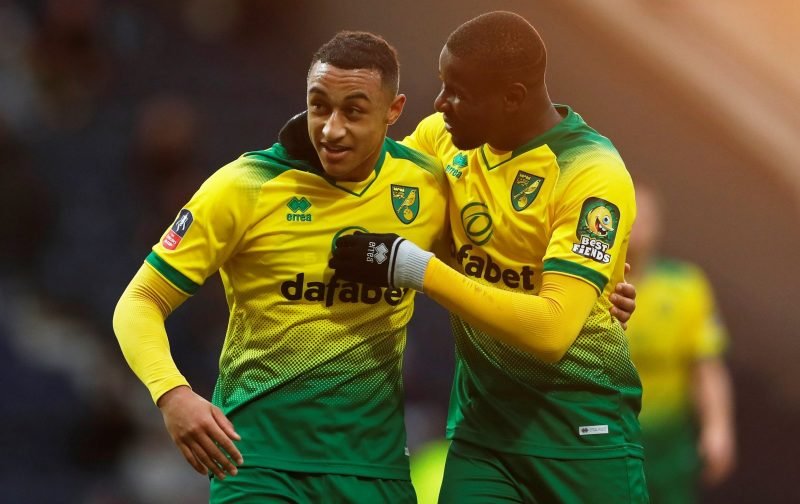 So, we’re in the “hat” for the fourth round of the FA Cup, eh? The first time for six years that we’ve managed to do that and, it has to be said that this win over Preston at Deepdale was notable for several reasons.

The most obvious is, of course, the first senior goals scored by Adam Idah and as you may have heard, he made it a hat-trick too. Idah has been around the first team squad for quite a while but has rarely made a match day bench, although he finally broke that duck as well as getting a late sub appearance against Crystal palace on New Year’s Day.

The 18-year-old has now been thrust into the limelight though and amid a current shortage of fit strikers, he could actually find himself starting at Old Trafford next weekend. He is also being held up by some members of the Canary nation on social media as something of a saviour for our season.

I’m not so sure about that but I do know that in terms of the future, young Adam looks to have the potential to make it all the way to the top of the game.

His first goal was an excellent striker’s finish that showed his pace and that he has that “gift” for scoring goals that Daniel Farke spoke about in his pre-match presser on Friday.

Congratulations on your win! Here are your highlights pic.twitter.com/eyFL0tjMrl

His second was a terrific piece of opportunism coupled with a sensational finish from about forty yards out.

Just in case you missed it earlier… 😉#ncfc #facup
pic.twitter.com/weGtRDPaYN

As for his third, I like to think he would’ve scored even if he hadn’t been pulled down by Preston keeper, Connor Ripley (who had a day to forget) but as it was, he stroked home a confident penalty to take home the match ball.

Top stuff and a day to remember for the rest of his life.

What a feeling that was! 🤩🎩 pic.twitter.com/hKaNYiW4xz

He was, I’m pretty sure, scheduled to go out on loan to the EFL this month with Doncaster Rovers heavily linked but now? With all these injuries to our forward line? Much may depend on the recuperative powers of Josip Drmic, Dennis Srbeny and last but definitely not least, Teemu Pukki.

Pukki’s badly bruised toe has required pain numbing injections ahead of his last four games and his late withdrawal with a slight hamstring twinge against Palace meant that he simply had to be given a break against Preston. The inability of Drmic to mount a supporting role to Pukki over the last couple of months due to a hamstring injury of his own has meant that the workload on Pukki has been substantial. Srbeny has a back issue that could yet see him miss the trip to Manchester United and even if fit, in many supporter’s minds he simply isn’t good enough for the Premier League. That may be true but it’s a harsh label to stick on Dennis when you look at the chances he has been given over the last two seasons.

Last season, Jordan Rhodes was the back-up to Pukki and he remained fit and ready and also scored goals when he was called upon. This season, that role was designated for Drmic but the Swiss international has returned to his injury prone type. It looks to me as though Drmic was a bit of a gamble based on one very good season for FC Nurnberg in the Bundesliga in 2013-14 when he scored 17 goals in 33 appearances. That season got him big money moves to Bayer Leverkusen and then Borussia Monchegladbach but he suffered with injuries and a lack of game time which resulted in far fewer goals. Despite that though he has managed 10 goals in his 34 appearances for the Swiss national team, which is decent, so I can see that a fee transfer for City would appeal.

Srbeny’s game time has been restricted due to the form of Rhodes last season and “big name” Drmic’s arrival last summer but he always works hard when he plays.

Drmic is not likely to be available until Bournemouth though and Pukki and Srbeny are also doubts for the United game. That means that any loan move for Idah looks to be off the table until at least two of those lads are fit again. The performance Adam put in against Preston will see many clamouring for him to stay in and around the Norwich first team for the rest of this season but that will only be of use to both him and the club if he regularly plays.

Idah looks like the future for Norwich City, in terms of striking options. He has been prolific at youth level and is now ready to make the step-up to senior football. Sitting on a bench will not assist his development though and it seems most likely to me that he will still be loaned out before the end of the month to get some much needed game development.

The difficult question for Daniel Farke though, will be what happens if he plays at Old Trafford and does well, perhaps he scores?

There are many variables that we outside the club are not privy to. What is Drmic’s long-term prognosis? Is he looking likely to be able to support Pukki as intended? The medical team will know and that will assist with the decision making. If he is going to be available then I imagine sending Idah out to Donny Rovers or somewhere similar will be back on Neil Adams’ (loan manager) agenda.

If Idah is given and seizes the opportunity against Manchester United then it will be a tough decision but why not, in that scenario, loan out Srbeny instead? With his pace and strength, Idah could also be an option on one of the flanks as back-up perhaps to Hernandez, Cantwell and Buendia. He showed he is strong enough to hold the ball up and bring others into play, as well as beating defenders with that ballistic speed of his.

Many good, quick strikers, have started out on the wing such as Henry, Martial, Rashford etc before being given a central role as they have developed and perhaps that might give Idah another way to get first team Canary game time because let’s face it, when Pukki is fit, Pukki will play. Surely no City fan would argue with that?

What the third round of the FA Cup in 2020 showed us, is that Norwich City have another star that is making his way through the Colney Academy. Looks like the system is working very well, eh?

The fourth round draw is on Monday night and for the first time in six years, the Canaries are in it.