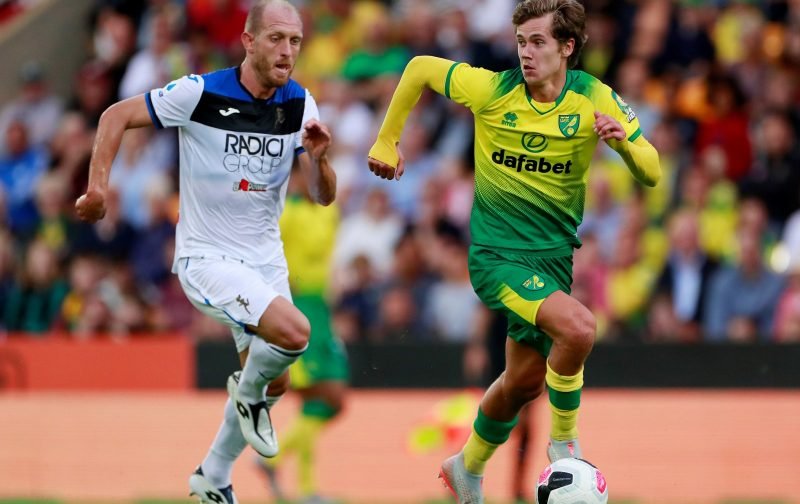 This was the proverbial game of two halves as Norwich City returned to Carrow Road for the first time since winning promotion against Blackburn Rovers last season.

The first half saw City create numerous chances against Atalanta, who you will have heard have qualified for the Champions League for the first time in their history, but they only managed to take one of them.

Todd Cantwell slotted home coolly from close range after the ball found him in the visitors’ penalty area to open the scoring in that first half which was pretty much all Norwich, at least in terms of meaningful attacking chances.

There was a first glimpse for me of Sam Byram, who looked decent in the first period without ever making me think he’ll replace Max Aarons for the big kick-off, and of big Ralf Fahrmann in goal.

He is a huge specimen of a man although he didn’t do enough in the second half to really make me think he will replace Tim Krul, at least not initially. He’s new to England and may take some time to settle but the pedigree he has in his back pocket suggests he is a very good player. We’ll see.

Cantwell was the standout Norwich player for me with lots of possession and neat passing. The goal was richly deserved and he also looks to have become a lot stronger, taking no truck from the Italian defenders. In this company, I think that says a lot.

He may not have exploded into the Norwich first team like Max Aarons did last season but I have a feeling that his time is coming and it might be now.

The only reason that the game wasn’t out of sight at the break was some unusually wayward finishing from Teemu Pukki (not by a lot), coupled with some good goalkeeping.

That and a howler from Timm Klose, who played the ball across his own box in first-half stoppage time to hand the ball on a plate to Muriel, who smashed the ball past Fahrmann, giving him no chance.

The second half saw the visitors ratchet everything up by a couple of notches and they ran out worthy winners, much to the delight of the Atalanta “Ultras” who created quite some noise considering how few of them there were.

Norwich conceded a second Muriel goal on 62 minutes which prompted Daniel Farke into making a triple substitution as Cantwell, Pukki and Trybull were replaced by McLean, Drmic and Roberts. Srbeny followed for Hernandez a couple of minutes later and the flow for both sides, as Atalanta made multiple subs too, became disrupted.

The arrival of Colombian international striker, Duvan Zapata gave the defence a real problem with the Atalanta striker being big, strong and very quick.

Zapata is a player of quite some talent. He scored 23 goals in 37 appearances on-loan from Sampdoria last season and last night I could see why.

He’s big at 6’2”, strong and very quick. It’s fair to say that he gave Timm Klose a torrid time. Ben Godfrey’s pace was as usual. an asset though and he more often than not, especially in that first half, had the beating of Muriel in that department.

If I’m being fair, I could point out that at no time did City have what is arguably their first choice back four on the pitch together against Atalanta.

Late on, Jamal Lewis was replaced by Philip Heise but he was beaten in midfield for the counter-attack that led to the fourth goal in the 90th minute.

It’s pre-season and it’s not all about winning, however, the defensive frailties of last season are still there and we can, more often than not, expect to face attackers of a similar ability and quite often some that are better, to those that Atalanta have in their ranks.