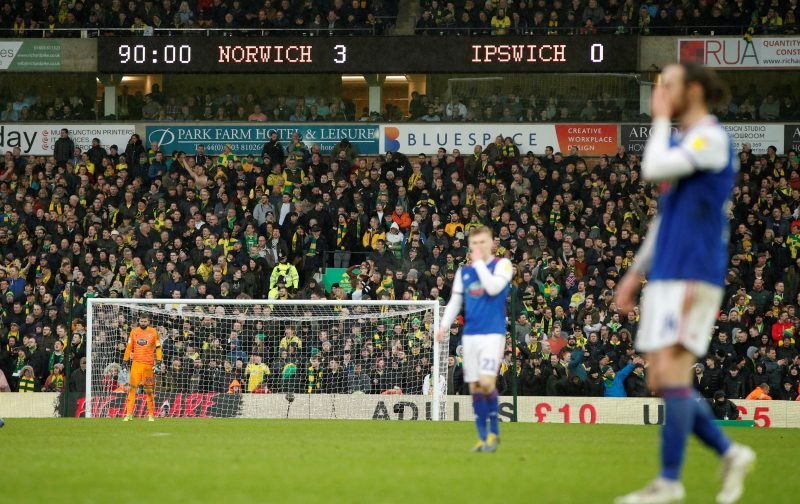 The second East Anglian Derby of the season had plenty of both drama and goals, even if the actual spectacle on the pitch wasn’t quite the flowing total football that we would’ve liked.

Norwich have performed brilliantly for most of this season and some of the football has been breathtaking in it’s passing accuracy, high pressing and sheer pace. In short, it’s been a joy to watch.

From what I can gather, that’s the opposite of what our opponents down the A140 have had had to digest. Turgid stuff with very little end product seems to be the issue and even the arrival of Paul Lambert hasn’t been able to turn anything around.

I say that but we all know that he has achieved nothing of note since he left Norwich and he’s about to suffer two successive relegation seasons.

Sometimes a manager experiences a perfect storm of events to produce a team that comes from nowhere to take a League by storm. Lambert had that at Norwich but he already had Grant Holt, Wes Hoolahan, Chris Martin, Daryl Russell et al.

Plenty of Norwich fans saw his departure as a betrayal at the time but to then go and join Ipswich was the ultimate betrayal. I’m guessing that he doesn’t need the money because he’s a football manager and will have received several ridiculously huge pay-offs as is the way in that profession.

He’s still a young man and he most likely still wants to work, which is why he took the Ipswich job. Having failed at Villa, been underwhelming at Blackburn and Wolves and then getting relegated with Stoke, he’s probably in the last chance managerial saloon.

He is, I suppose, “proven” in League One and that’s why Marcus Evans approached him. This time though, he won’t have a Holt or a Hoolahan. Instead, he’ll have Luke Chambers and Cole Skuse.

Speaking of Chambers, here’s what Chambo has to say after the game, please, stop rolling your eyes…

All over at Carrow Road. #itfc pic.twitter.com/urvf4HnVaa

???? All of the action from yesterday's East Anglian derby at Carrow Road ???? #ncfc

Yesterday began with a superb fan march, organised in conjunction with @AlongComeNodge and @BE_Norwich! #ncfc

Thanks to all those who joined in! ???? pic.twitter.com/yEdGrCTOeY

So good to see @AngusGunn01 and @joshmurphy65 back at Carrow Road today! #ncfc

Norwich against Ipswich isn’t like a proper derby they said…

It’ll be the first time in the history of the East Anglian derby that either side has gone a decade without defeat #ncfc pic.twitter.com/yCIT2RuMVH

Goals this season (all comps)

Excellent match at Carrow Road. Ipswich Town can take many positives from the game, but it feels like too little, too late for them now. Norwich are going up in my opinion! #ncfc #itfc pic.twitter.com/5UlL51eycw

Just to be clear – I am a Norwich season ticket holder but I’ve been around East Anglian football for 30 years+
Town’s current predicament gives me no pleasure. They were half decent today, fully committed, fans sang their hearts out. Do hope Ipswich can escape the drop. #itfc

We have been working with our Met mounted colleagues today at the Norwich Vs Ipswich match. A long day for the officers and horses but all back safe and sound. The benefits of Mounted Police can be used far and wide! @CityPolice @MetTaskforce @cityoflondon #noborders #ncfc #itfc pic.twitter.com/jPAOGsr2fj

Flying back to England this evening so only catching up with the great news that Norwich beat Ipswich but what happened to make my old manager, Paul Lambert, as angry as this?? pic.twitter.com/ETUPKbn2DH

Luke Chambers is to Ipswich what Russell Martin became to Norwich. Respected leader and club man but fundamentally not good enough as a CB to be anything but part of the problem rather than the solution. Like us, they won’t improve until they cut that tie, however difficult #NCFC

Even as a Norwich fan I have always been very respectful of Ipswich history, of which they are rightly proud.
Today Paul Lambert pulled his pants down and took a massive dump all over that history and legacy.
Surely no genuine Ipswich fan can still idolise him now? #NCFC

Buendia gives it to Pukki who finishes. #itfc

82 – Onel Hernandez's goal for Norwich against Ipswich after 82 seconds was the fastest league goal scored by the Canaries since October 2011 (Anthony Pilkington vs Swansea, 48 seconds). Quickfire.

"Excuse me officer, you see that seat over there? That's where I used to sit before my ego took over and ruined my career" #ncfc pic.twitter.com/PWclMXcjoF

Luke chambers. What a bloke. Fully committed. Captain. Backs his manager up. And absolutely nowhere near pukki for his goals and can't kick the ball on the floor to a teammate. Top man. Fans love him, so Do opponents because he's pony!

Dear Paul Lambert. Spot the difference. Class is indeed permanent. And this guy was fired, he didn't have a hissy fit and jump ship. #ncfc https://t.co/rlCN1cvorB

‘Hello Delia. It’s Matt Gill. Any chance of getting my old job back? ‘ pic.twitter.com/Uh53Wu7LMo