Norwich’s “Must win” games, VAR And A New Star In The Making 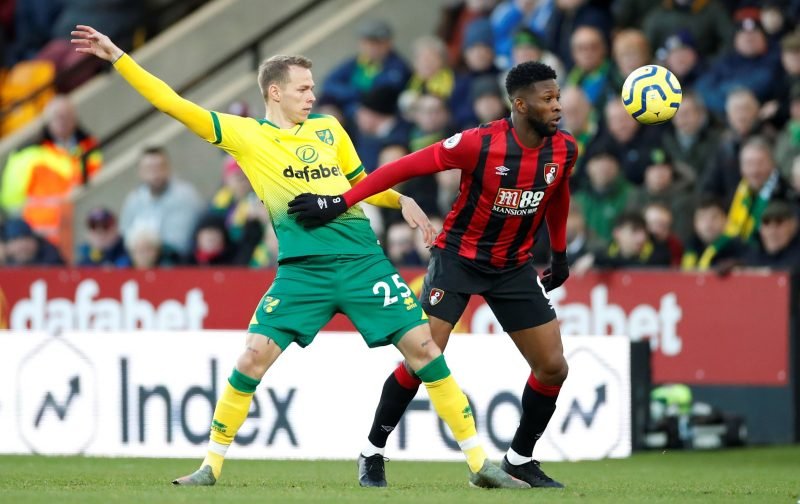 Finally Winning A “Must Win” Game

Well, how about that? We actually won a “must win” game, only just, but we won it.

As has been the way of late, aside from the Manchester United debacle, Norwich played pretty well for the most part, creating a number of chances and having more possession of the ball than Bournemouth and also scoring a penalty too.

Even before Steve Cook’s bizarre “save” from Ondrej Duda’s goal bound shot, City were the better team and finally they had a bit of luck go their way thanks to Mr Cook.

Except they did check it. And it took at least 2mins 😱 #ncfc @FansAgainstVAR_ https://t.co/CERMjrcmWh

This game was notable for several things that happened in it, not least the way that referee, Paul Tierney became the first referee to use a VAR monitor to overturn a yellow card that he had given to Ben Godfrey for a late challenge on Callum Wilson.

This went better than expected tbh. Thanks for everyone in the South Stand who helped us out. https://t.co/6q0bxC1n1Y

In terms of that, I’m not sure how it came to him, probably from Stockley Park in his ear, but having flashed a yellow card at Godfrey, he then watched a replay on the monitor (I could see the VAR screen replaying it from the River End) and decided to overturn that and up it to a red. Fair enough, it was late and it wasn’t pretty. After the red card, the replay was briefly shown on the big screen to howls of derision from the crowd but being honest, it was a sending off.

“I’ve seen them given” is, I believe, the phrase.

Godfrey’s dismissal will have been a big blow to Daniel Farke. Having missed the last month through injury and having seen Grant Hanley, who is still the Club Captain, come back from his own injury issues and put in several decent shifts, it’s clear that Godfrey and Zimmermann are his current first choice centre back pairing. How the return of Klose will fit into that dynamic will be interesting to see although I suspect that Ben and Zimbo will still be the first choice.

In the meantime, having only been able to name three recognised central defenders in a squad for the first time this season, he’ll be back to just two for the next three games. Hanley will have at least three more chances to press his case for a starting berth, assuming he stays fit and is selected.

Looking at the positives, Ondrej Duda had a great debut in yellow and green, didn’t he? I thought so, anyway. He looks as though he is going to be that elusive missing link to Teemu Pukki, which was there last season through Marco Stiepermann but which has broken this term. There were through balls, tricks and flicks and a quick moving of the ball on more than enough occasions to impress me. Mind you, I seem to remember a certain Steven Naismith having an impressive Canary debut, so I’m not getting too carried away just yet. I’ll be keen to see how he plays against Spurs on Wednesday night away at that shiny new stadium in North London against some higher quality defenders.

Nobody’s Waving A White Flag Yet

“One swallow does not a summer make” is an old and apt saying for this type of situation. There will rightly be a wave of positivity around Colney, Carrow Road and the Canary nation in general after this win, which was fully deserved, even if the dismissal of Godfrey gave us a dodgy 10 minutes at the end but there needs to be a kicking on from here on and a heavy beating at Spurs isn’t going to help with that.

A result of any kind against a Tottenham side without Harry Kane will be massive, so that is what City must aim for now. Farke said that City needed seven wins prior to the Bournemouth game and that winning all our home games would be enough.

Obviously, we still have Liverpool to play at home but we also have the likes of Southampton, Burnley, Brighton and West Ham, which are all winnable games to come and if we can pick up a few points away from home here and there then it’s all to play for.

“IF” is the big word there and while we have been written off in every quarter, which is understandable, no-one is going to wave the white flag inside the stadium on a match day just yet.