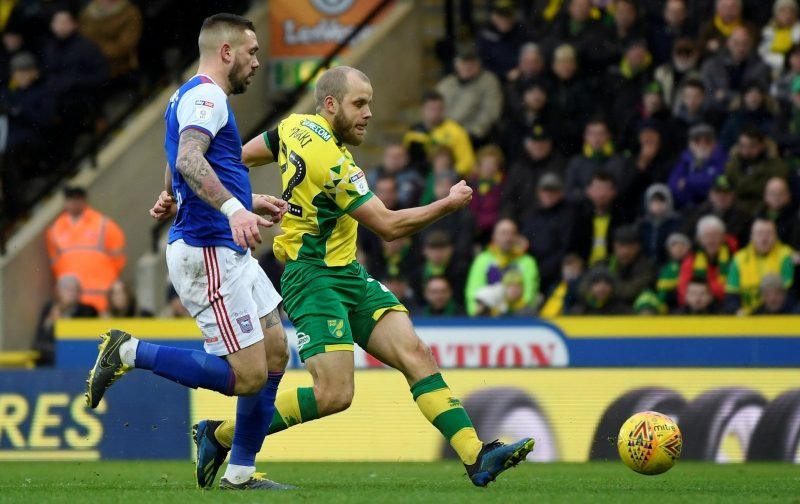 Norwich will extend their unbeaten run over Ipswich to ten years on April 19th 2019.

As best as I can find, that is the longest period for either team to remain unbeaten in the history of the East Anglian Derby. It’s quite astonishing really, isn’t it?

This was also the biggest league “gap” between the two teams in the history of the derby and when I say “gap”, it’s probably better to call it a gulf, certainly a gulf in class.

The visitors came with a game plan, naturally, and it revolved around trying to harass and kick the home side, to disturb their rhythm as many other teams have tried to do this season. We’re used to the closing down of goal kicks, making sure that Tim Krul has to send it long and turning each one into a 50/50 but even if the ball is lost in the air, the high tempo pressing wins it back more often than not.

The early goal, scored from City’s first attack after just two minutes helped, of course, but Ipswich managed to steady the ship, albeit they never really tested Krul.

Much was made by Paul Lambert before kick-off of his experience in derby games. He’s played in Old Firm derbies and for Dortmund against Schalke you know, so this is small fry to him.

At least that’s what he’d have you believe.

He lost his cool here, badly. In fact, I’ve never seen him lose his cool like that while at Norwich or any of the other clubs he’s managed either. He lost it so badly that he got into a physical confrontation with a steward who was trying to move him away and then he had to be restrained by a Police Officer.

Don’t imagine for a second that he was as blasé about this game as he tried to make out in the build-up. It meant a lot and it hurt to lose. That explosion on the touch-line was the tell-tale sign of a man under severe strain and pressure. The Tractor Boys are going down, no doubt about that, as the Barclay gleefully sang as Teemu Pukki scored his first goal of the game.

Ipswich have a squad full of players that aren’t good enough for this level and the difference in class was evident in the big moments in the game.

Pukki has been a revelation this season and is now the quickest Norwich player to reach the striker’s magic 20 goal target in the last fifty years.

Fastest Norwich City players to 20 league goals in a season in the last 50 years:

His acquisition on a free transfer is one of the best signings that Norwich City have ever made. Grant Holt cost £400k and Wes Hoolahan cost £250k, while Darren Huckerby cost a mammoth £750k – Pukki is certainly matching Holt and Huckerby for impact in his first season in yellow and green.

I know I’m biased but I think that Norwich City are going up. The football we have played in recent weeks, along with the fact that we have only lost once in the last 19 games, that fluke against Derby, means that we are the Championship’s form side and that run took place during arguably our toughest set of fixtures of the season.

Having watched My Football Writer’s excellent interview with Stuart Webber, I am convinced that our club is in excellent hands. That fella knows what he’s doing, I can assure you if you hadn’t already realised.

Don’t find yourself panicking because Daniel Farke is out of contract in the summer, Stuart says we should relax, just like Frankie used to. That’s an 80’s reference for you young ‘uns.

Webber has given Farke the tools for the job and not only does he know what he’s doing, but he’s also as cool as a cucumber doing it as well.

Sunday’s melee in front of the dugouts showed that. He just kept his cool as others lost theirs and casually winked at the camera. That man is box office.

Next up we are away at another old City manager’s new club, Alex Neil and Preston North End. Preston have quietly gone about their business of becoming the hard working, decent side that they were last season after a shockingly bad start to this one and it won’t be easy.

You can say that about any of our upcoming fixtures though and that’s the reality of the league we’re in. Any single one of these matches could be a banana skin but as Herr Farke has said before, I’m confident that he “won’t let the lads lose the ground under their feet.”

The one sour point from yesterday, from a Canary point of view, was the loss of Mario Vrancic through being literally kicked off the park.

he has been making Norwich tick and his absence for any length of time would be a blow. Fortunately, we have the likes of Alex Tettey and  Kenny McLean, oh, and a certain Moritz Leitner is back in training too, which could be very, very timely.