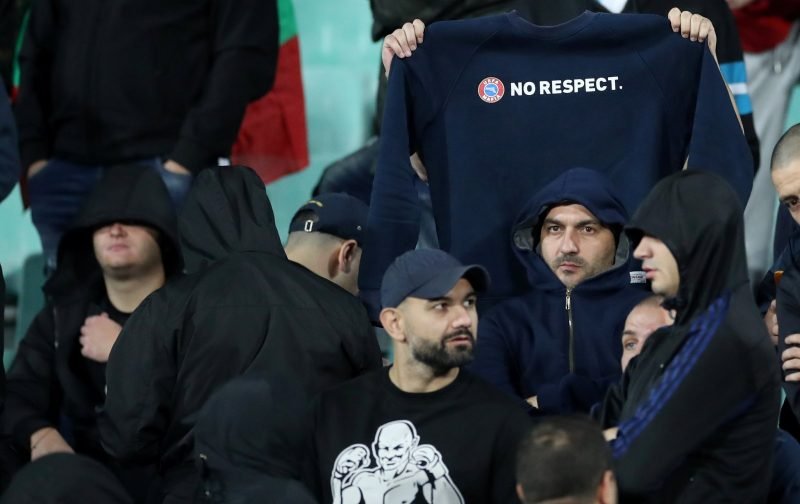 If you’ve only been watching football live for the last twenty years or so, then I imagine that you will generally feel that it is a safe thing to do on a Saturday afternoon, especially at Carrow Road.

There is usually a pleasant air to walking to Norwich City’s stadium, the anticipation of the game, the prospect of winning it is always real, never mind who we are playing and I can count on the fingers of one hand the number of times I have seen or heard unpleasantness in the last decade and yet, it wasn’t always like that.

Watching the disgusting and abhorrent scenes unfold in Sofia on Monday night reminded me of a time that English football and society, in general, can look back on with shame and it wasn’t too long ago and it wasn’t too far away either.

I first went to Carrow Road as a seven-year-old lad in 1977 but didn’t really become a regular until the mid-eighties and let me tell you, football was a very different experience than to what we know it as today.

My first season of going regularly was in 1986-87 when there were signs above doors in the River End and Barclay stands that read “Boys £1.50“, there were sellers of fanzines outside the ground on the approaches such as “Ferry across the Wensum.”

I loved going to football.

Sadly though, there was a dark undercurrent that my 15-year-old self observed on numerous occasions.

First off, there was the violence. It was a regular thing, with fans being attacked by opposition fans just for looking at them the wrong way or wearing a Norwich City scarf, usually after the match. It wasn’t all visiting fans either, in case you’re thinking that Norfolk boys aren’t like that. I can tell you that they were back then. I’ve seen fights started by both sides although it did always seem to be worse when the opposition came from a big City.

I can vividly remember seeing a couple of Norwich fans of about my age getting set upon by two adult Man City fans after the two teams had played out a drab 0-0 draw. Neither side was battling for anything, it was a meaningless game but still came the punch-ups afterwards. This happened on Riverside Road near to the old Boulton and Paul factory that is all part of the Morrison’s and Riverside complex now.

Me and my mates would tuck our scarves inside our coats, keep our heads down and try not to catch anybody’s eye as we walked away from the ground. Seriously.

While watching the Bulgaria v England game last night, it wasn’t violence that brought back the bad memories for me though, it was the chanting and the monkey noises that suddenly transported me back to the eighties.

Back then, the Barclay stand looked very different to how it does now. It housed both home and away fans with the away supporters being situated in what are now blocks D and E.

Both sets of supporters were contained behind huge black bars from floor to virtually the ceiling of the stand. Try to imagine that now, you’re watching football through bars and to your left are the away supporters, also behind bars. Talk about an impeded view!

The Barclay was all standing then and didn’t have an upper tier. There were yellow crowd control bars situated within the stand to try to stop people being crushed when a goal was scored and those at the back delighted in starting a surge that took many of them to the front. At age 15, my mate Lee and I would look to get there early and stand with our backs to one of these stanchions to protect our small frames from the surge.

I’ve got many good memories of standing there and I saw some amazing moments on the pitch and if you didn’t mind the odd sharpened coin or dart (I kid you not) being thrown from the away end, then you could try your luck close to the away supporters.

However, it was at Carrow Road that, I think, I first became aware that racism was a thing.

Having grown up in rural Norfolk, in a village near to Wroxham, I rarely saw a black man or woman. I just didn’t know anybody who was black.

It wasn’t until I started going to football matches at Carrow Road that I first heard chants that made me feel uncomfortable then, as a fifteen-year-old boy. This was around the time that infamously, John Barnes and other black footballers had bananas thrown at them and there’s that photo, the one where he back-heels away a banana in the middle of a game.

I rember that a regular thing in the Barclay at that time was a horrific chant that was always started by a loud, lone voice during a quiet moment in the game.

“Trigger, trigger, trigger” came the lone shout and incredibly, what seemed like the whole Barclay stand would respond with “Shoot that…”

I’m sure you can imagine what the last word was. I could never ever see who the lone voice was but just imagine, they probably still go to Carrow Road to watch their beloved Canaries, as will plenty of those who sang the second part.

This was at a time when Norwich City had Louie Donowa, Dale Gordon and Ruel Fox playing for them and they would’ve clearly heard what was being chanted. I vividly remember feeling bad on one particular occasion for Ruel Fox when the chant went up. I should point out that this chant wasn’t aimed at City’s black players but at the opposition black players, which is crazy in itself.

Racism is a disgusting, hateful thing, practiced by ignorant people and watching the scenes in Sofia brought back those dark days of the mid to late eighties for me.

Thankfully, British society is very different these days but as I mentioned above, those people chanting in the Barclay back in 1986 and the lone voice are probably still with us and they are probably still sitting amongst us in the Carrow Road crowd. Do they still think the same but just don’t want to say anything now as it has become against the law to say such things?

There’s a very famous quote, used by John F. Kennedy in a speech he made in 1961 but which dates back long before then: “The only thing necessary for the triumph of evil is for good men to do nothing.”

That quote is always going to be relevant in human society and never more so than it is now.