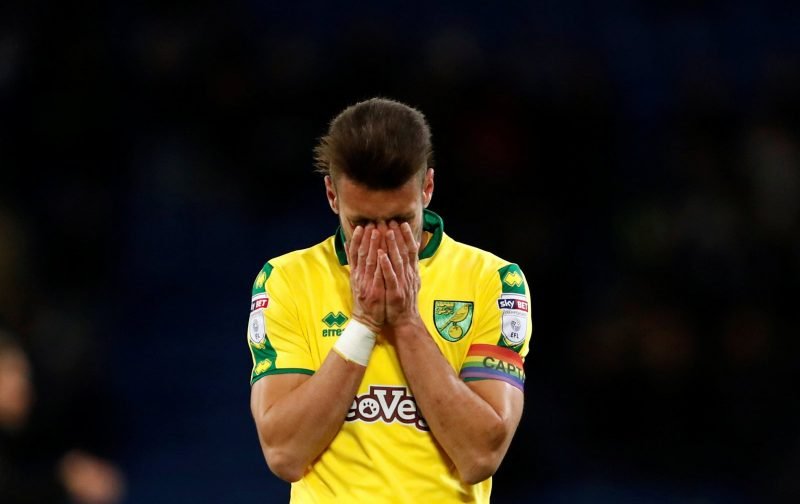 Stubborn in defence but toothless in attack, that just about sums up Norwich City’s trip to Deepdale on Saturday.

I suppose that sort of sums up our season as well. As a microcosm of the way things have gone in 2017/18, this wasn’t too far away in terms of being an example of how Norwich City have fared throughout.

Harrison Reed was once again preferred to Ivo Pinto at right back and that doesn’t bode well for City’s Portuguese Captain. Reed was brought in on loan as a defensive midfielder but has arguably given his best performances at right full-back, even when the opposition have tried to continually test him with big booming aerial balls, like Preston did and Ipswich before them.

As I’ve said before, if it wasn’t for the fact that he is lightning quick, I think Ivo might struggle to be first choice, which he has for most of his time at the club. He’s not the best defender and his final ball/crossing isn’t anything to write home about. Reed, by contrast, is a better crosser and defender which are key attributes in the modern game for a full-back.

Ivo has one year left on his contract, which I imagine is quite expensive for the club and if the recruitment team’s January efforts were anything to go by, a new right-back is on the shopping list for the summer.

Preston don’t have any real stars and are all about hard work, intensity, physicality and effort. You could say that they play in the mould of their manager. There was plenty of hard work and physicality that ensured waves of Preston attacks came flowing forwards time and again.

Only defensive stubbornness, the crossbar and on one occasion a sensational sliding tackle in the area from Jamal Lewis stopped the home side from seizing all three points.

At the other end, City struggled badly to show much in the way of attacking threat and barely laid a glove on Preston. Naturally they had most of the possession but failed to register a single shot on target and that’s the most depressing thing about it for me.

It wasn’t until Onel Hernandez came on in the 77th minute that Norwich started to look livelier and the flying winger took a touch too many after a typically direct run, when he should’ve shot, soon after coming on.

Hopefully, Hernandez will play a bigger part against Leeds next week so that the season at least ends on a bit of a high.

Okay, I’m going to try to be positive. Norwich were at least well organised, for the most part, and defended for their lives at times, putting their bodies on the line to get something in the way to block shots and crosses. In terms of being positive about this match, I think that’s all I’ve got to say.

With Alex Tettey likely to only have two more games in a yellow shirt left, there will be a hole in the City midfield in terms of steel, next season. Having said that, Kenny McLean (he’s Scottish and bound to be nails) is joining on June 1st and Ben Godfrey will be in the house again this summer. Tom Trybull will return and there’s also a lad that you may remember named Louis Thompson, who hasn’t been able to buy a break in the last 18 months or so, that could also be available to Daniel Farke for next season.

See, I knew I had a bit more positivity left in me.

Back to the here and now though, I just want to see this season end and put it behind us. It’s been bang average and in this league, that just isn’t good enough. City’s record of 14 wins, 15 draws and 15 defeats tells it’s own story.

If Norwich are to compete at this level and mount a promotion challenge, they will need more than just talented ballers. Steel will be required as well, for the days that you come up against a Preston, an Ipswich, a Sheffield United or a Cardiff City etc, etc, etc.