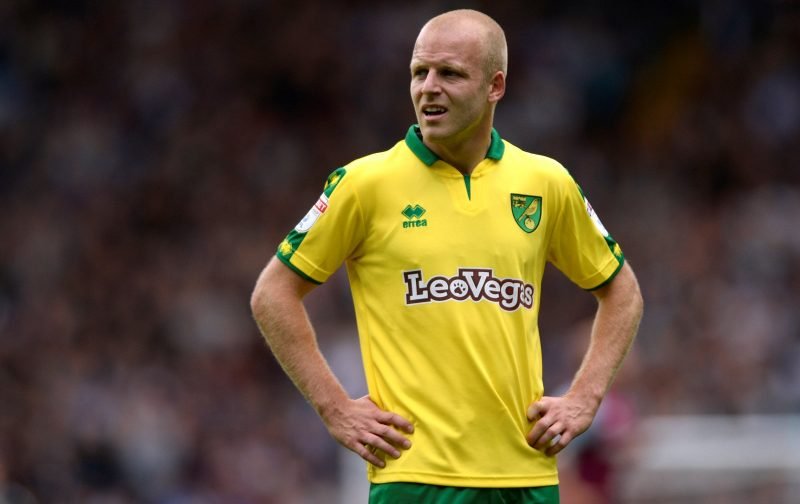 He is, I think, in the same bracket as Ricky Van Wolfswinkel as one of Norwich City’s two greatest transfer follies of the last ten years, maybe even of all-time.

Both of these white elephants cost around £8m and both came with huge promise and expectation on their shoulders and both failed miserably to provide anything like what you might call value for money.

I’ll openly admit to being excited by the news of the Naismith signing at the time. It was January 2016 and the Canaries were in the middle of a Premier League season, the first half of which had gone fairly well.

Naismith was signed along with Ivo Pinto and Timm Klose as the January signings to secure City’s Premier League status as David McNally backed Alex Neil in the transfer market.

Klose also cost around £8m with Pinto being around £3m.

All three players were reportedly on very good salaries and especially in the cases of Klose and Naismith that was understandable. Klose had Champions League experience with Wolfsburg behind him and Naismith came with proven Premier League ability at Everton in his back pocket.

His debut in a ridiculous 4-5 home defeat against Liverpool saw him score his first goal for City and generally produce a pretty epic debut performance – he also drew a penalty from Alberto Moreno which helped City go 3-1 up.

It was pretty much downhill from there though.

A debut against an old foe, was that what spurred that epic first appearance in yellow and green and why couldn’t he reproduce that form regularly again after that?

It’s the eternal mystery for the Canary faithful and now, having scored 6 goals in 44 appearances for City, the millstone that was his wage packet is finally gone.

Earlier in the summer, we had news which really stuck in the throat, that Everton were due a bonus as a result of City’s promotion. A figure of £1m was mentioned in the local press along with talk that the player himself was also due some sort of promotion payment.

Whether that happened or not, I can’t say for sure but the payment to Everton seems legit.

Hearts offered Naismith and City a way out, although the likelihood of the player going there and Hearts paying his full wage was always going to be zero. He joined and played at Tynecastle on-loan, with City still paying a large portion of his salary, for the last eighteen months where he managed 14 goals in 33 appearances and earned cult status amongst the fan base.

I don’t doubt that Naismith is/was a good player, his Everton and Rangers history shows that but for whatever reason, he just didn’t produce for City.

He often didn’t seem to be on the same wavelength as his teammates and remember, he had Wes Hoolahan on the same side as him while Wes was still a regular at that time.

Wes Hoolahan could keep the ball away from Paulo Maldini and Franco Baresi in a phone box and I reckon he could find Lord Lucan with a cross field pass if he put his mind to it and yet, I remember Naismith often just not being on the same page as Wessi.

You would think that being prompted with passes by a still in his prime Hoolahan would make such a player a world beater.

Only Naismith knows why he wasn’t value for his reported £40-£50k per week salary and why he just didn’t deliver on the turf at Carrow Road.

I reckon he cost Norwich around £8m in salary with my back of a beer mat maths and that, coupled with his £8m transfer fee and the £1m bonus due to Everton, means that he cost about £2.8m per goal.

That is a very sobering set of financial realities for us in yellow and green and it’s exactly why the Canary nation are generally so relaxed about not spending a hundred million quid on players this summer.

We’ve had our fingers burned and now the long-term risks involved in spending that sort of money, even on a player like Naismith who is still widely acknowledged in the football world as being a decent player, have made us wary of doing it again.

You only have to check out the Hearts Twitter timeline to see how happy and excited the “Jam Tarts” fans are at his arrival.

By contrast, the City timeline is glad to be shot of him, glad that he’s finally gone.

That sentiment, it seems, is echoed by Mrs Naismith…

We can’t be sure exactly what she means by “It’s been a long wait but thank goodness it’s over” but I’ve got my own ideas and I’m sure you’ve got yours.