The Last Time I Went To Selhurst Park… 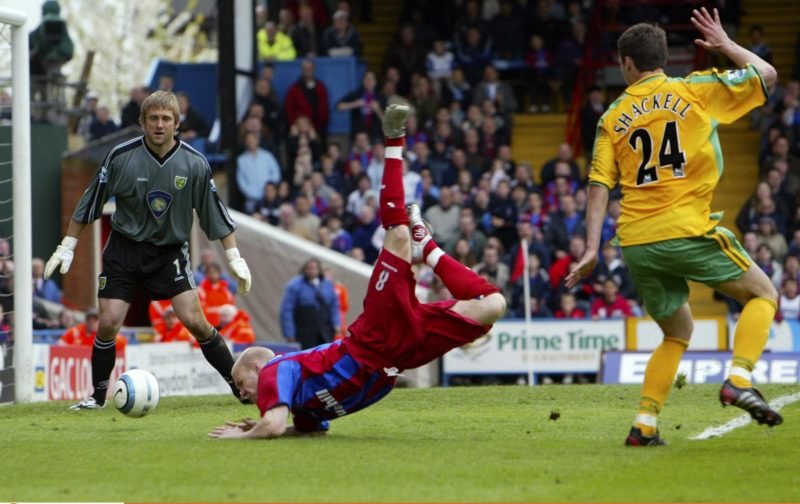 I saw a photo on Twitter yesterday that reminded me of a day a long time ago, at least it feels it now anyway.

The day in question was Saturday 16th April 2005 and this was the day of my Stag do, two weeks before I was due to marry my fiancée, Lisa.

My best men, Lee and Paul had arranged a trip to London for the weekend, with the relegation three pointer of Crystal Palace v Norwich City at Selhurst Park as the afternoon matinee.

We met early at Norwich Train Station and hopped on, I believe, the 7am train, which is a painfully early time to be starting a Stag do but Lee had booked a game of 5-a-side at a  Leisure Centre not far from Palace at about 11am.

We got to London, dropped our bags at the hotel and headed to Crystal Palace and the dreaded leisure centre. So far, so good, no real “Stag issues” I hadn’t been forced to drink anything terrible yet but when we got to the Leisure Centre changing rooms, out came the leopard print dress.

I vividly remember walking through the busy corridors of the centre as we made our way out to the 5-a-side pitches, getting the strangest looks much to the amusement of my mates.

I can still see the look on a janitor’s face as he was mopping the floor and looked up to see a man in a dress with a football under his arm just walk by, like it was the most normal thing in the world.

“Morning”, I said as I passed.

The game of football went by in a blur although I did score several goals. Running was initially a problem but I found I could hitch up my skirt and move about quite quickly.

You’ll understand if my memories of all of this day are a little sketchy and what we did after the 5-a-side and for lunch has escaped me. I know we were drinking and I think it may have involved a greasy burger but I can’t be sure.

We caught the train to Palace and walked to the ground, I seem to remember it being a bit of a yomp and I also remember that there was a lot riding on this game.

Norwich had been promoted back to the Premier League as First Division Champions in 2004, having beaten West Brom to the title.

The following season though saw the Canaries struggle in the lower reaches of the Premier League table although things did pick up with the £3m signing of Dean Ashton from Crewe in January.

Ashton was scoring goals regularly and he had helped City make a fist of the final months of their first season back in the top flight for nine years.

It was now April though and City still hadn’t won a single match away from home all season. It was looking like it was going to be three teams from Crystal Palace, Southampton, Norwich and West Brom for relegation but it was tight and there was still everything to play for.

In their previous match, City had beaten Manchester United at Carrow Road 2-0, with goals from Ashton and Leon McKenzie. A United team that contained Wayne Rooney, Cristiano Ronaldo, Ruud van Nistelrooy and Rio Ferdinand, no less.

The sense of hope was real and it was tangible as we walked to Selhurst Park. This was my Stag do but this game could be crucial for my football club and well, you know what it’s like being a football fan.

Selhurst Park was a little down at heel, shall we say. There were pillars holding up the stand that you had to constantly peer around to see the game and the facilities for the away fans were shocking. The gents’ toilets were horrific and getting a beer at the bar was a long job.

My best mate, Lee pulled out yellow wigs for us all to wear and we were pictured on Match of the Day that night.

The game got off to a bad start for City with a fifth minute goal from Joonas Kolkka souring the mood somewhat. Palace were the better side and roared on by a loud home crowd, they pressed for a second goal.

Norwich rode their luck a bit with Dougie Freedman and Andy Johnson both going down in the box but referee, Rob Styles waved away their shouts for a penalty, although Johnson wouldn’t give up on that shout.

A powerful run from Damien Francis set up Ashton and he equalised on 22 minutes with the sides going in level at the break.

At half-time, the bar was busy and the small away concourse was noisy, filled with the raucous songs of the travelling Canary support. Somebody got us all a beer and we had a photo taken.

Took the stag and groomsmen to Selhurt Park in 2005 to watch the 3-3 draw. The worst result for both teams. @Tuckachelli pic.twitter.com/q9vD058wSF

I seem to remember that it took a long-time to get that beer and we were still drinking them when the second-half started and suddenly the noise outside was deafening. I necked what I had left of my pint and ran outside to see the Norwich fans going mad. I looked to my right and saw that Dean Ashton was being mobbed by his team-mates.

We’d only gone and taken the lead!

Seven minutes later and it was 3-1 as ex-Eagle, Leon McKenzie scored after Darren Huckerby’s run destroyed the Palace defence to set him up.

But no, it didn’t turn out that way. Palace’s heads didn’t drop and Michael Hughes headed past Rob Green from an Andy Johnson cross to reduce the arrears on 73 minutes.

City were now hanging on as the game went into the final 15 minutes and having tried it all afternoon, Johnson eventually got the penalty he had been looking for by diving – I refuse to believe it any other way.

He ran into the area and got the briefest of touches from Jason Shackell before dramatically throwing himself to the floor.

Mr Styles bought it and pointed to the spot.

Johnno was fit enough to take it and coolly slotted the ball past Green in the City goal.

Greeno made a sensational save late on to keep it level but the game finished 3-3, a result that did neither team any good, in the end.

The day got better after that though and we headed into central London for dinner at The Sugar Hut, where Lee had arranged a private room for us all and where I had to dress up again, this time like the fella from the Village People with the leather cap, big moustache etc.

I managed to ditch that garb by the time we moved on and we ended up at Tiger Tiger, I have no idea where either of those two places are or even if they still exist.

This was in the days of clubs closing at 2pm rather than having 24hr licences so the evening came to a close around then. The illegal mini-cab ride home was all a bit of a blur but I remember waking up the next morning and not being a total mess, I even managed breakfast.

A brilliant and memorable day that was only slightly soured by this result. In the end, City were relegated along with Palace and Southampton but they had their chances to stay up in the games after this one.

They beat Newcastle and Charlton in successive home games before losing 4-3 at Southampton on our wedding day!

They then beat Birmingham 1-0 meaning that if they could only beat Fulham at Craven Cottage on the final day that they would stay up. It was in our own hands on the final day.

Remember they hadn’t won away all season though.

The end, when it came was brutal. Lisa and I were on honeymoon in the Maldives. The island of Kuradu operated a “no shoes and no news” policy.

There was only one Television on the island and no wi-fi, not that mobile phones really even existed as we know them today. I know kids, what could you do on a paradise island with your beautiful new wife for two weeks without wi-fi, eh?!

We went to the TV Room and they had Sky Sports, who were flicking between the games. Once the score got to 3-0 we gave it up as a bad job and went to the bar.

It didn’t ruin anything though, despite being a football fan, the palm trees, warm air, white beaches and clear blue sea helped us to get over it.

I also remember seeing a strange little garden where visitors could leave a message painted on a smooth stone or rock. Most people left messages like “Dave & Sue 2005  x” that sort of thing but I distinctly remember one saying “2005 Ipswich Town promoted to the Premier League” needless to say that didn’t happen.

So anyway, if you’re going today, have a great day out and sink a beer or two for me. Make sure you have a game of 5-a-side in the Crystal Palace Leisure Centre beforehand and then, whatever the score, pop into central London for a few beers afterwards and then catch a kebab and a mini-cab on the way home.

I can promise you that you’ll have a grand day out.