The Man Of Steel, The Dereham Deco And Sir Benny – Norwich City Are Back In Business 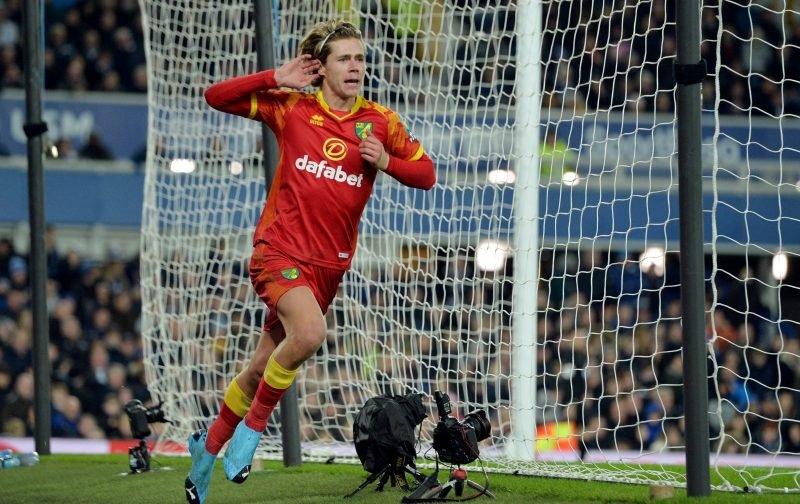 I said before this game that we, the Canary nation that is, shouldn’t put too much weight on the admittedly broad shoulders of Christoph Zimmermann. The loss of the big German at West Ham’s London stadium last August, to a horror challenge from Sebastien Haller was far more damaging for City than any of us perhaps thought at the time.

It left Ben Godfrey as the only fit recognised centre-back in the squad’s ranks and ever since, Norwich have had to make do and mend at the back with both Ibrahim Amadou and Alex Tettey doing their best to fill Zimbo’s large boots – with varying levels of success it must be said.

Daniel Farke had mentioned many times that not having fit central defenders was hampering his options for team selection, although I for one was trying to calm the impending return of Zimmermann due to the fact that he didn’t have a full pre-season and had only played twenty odd minutes of Premier League football this season.

When you take the time to remember the level in Germany that he came from, it is expecting a lot for him to immediately adapt to the English top flight, isn’t it?

Well, it turns out that this isn’t exactly the case, based upon Zimmermann’s leader’s display at Goodison Park on Saturday.

Godfrey seemed to relish having his senior partner back and between the pair of them they put in a resolute display of defending that Duncan Forbes and Dave Stringer would’ve been proud of.

Zimbo’s crunching tackles, aerial prowess and general physicality, not to mention the weapon of his cross field diagonal passing ability, coupled with Godfrey throwing himself into blocks and clearances, saw the pair keep only the Canaries’s second clean sheet of the season, both of them surprisingly away from home.

When the backline was breached, Tim Krul was on hand to make some great saves, notably from Tosun and Sigurdsson and he surely leads the way to the Barry Butler Memorial Trophy, so far this season.

Another positive was the return to first-team action of Sam Byram, who has had to patiently wait for his chance with the stock of Max Aarons and Jamal Lewis still high from last season. Lewis has looked lacklustre lately though and an injury picked up on international duty with Northern Ireland saw him replaced by Byram.

The former Leeds and West Ham full-back was excellent. He was a threat going forward, defended well generally and could’ve scored a couple of goals, had he perhaps been a bit more match sharpened. He also kept Theo Walcott well shackled for the most part.

The big call of the day though was the dropping to the bench of Emi Buendia, explained by Farke as being due to the excellent work by Todd “The Dereham Deco” Cantwell on the Colney training pitches of late.

It worked though and coupled with the moving forward of Kenny McLean to become chief support for Teemu Pukki, City had a front four (including Onel Hernandez) that looked a threat, albeit on the counter, again.

McLean is a hard working and sometimes underrated player but he played a role further forward when he was at Aberdeen and he added something different here with his physicality in the air and some clever play. Teemu Pukki suddenly had support, something that Marco Stiepermann has struggled to provide this term and the first goal owed a lot to McLean’s brave header that found Pukki, who held the ball up brilliantly as he waited for Todd to get into a shooting position.

Cantwell’s finish was precise and the Canaries, having already seen the home fans start to turn on their own players with their half-time booing, suddenly had something to hold on to. 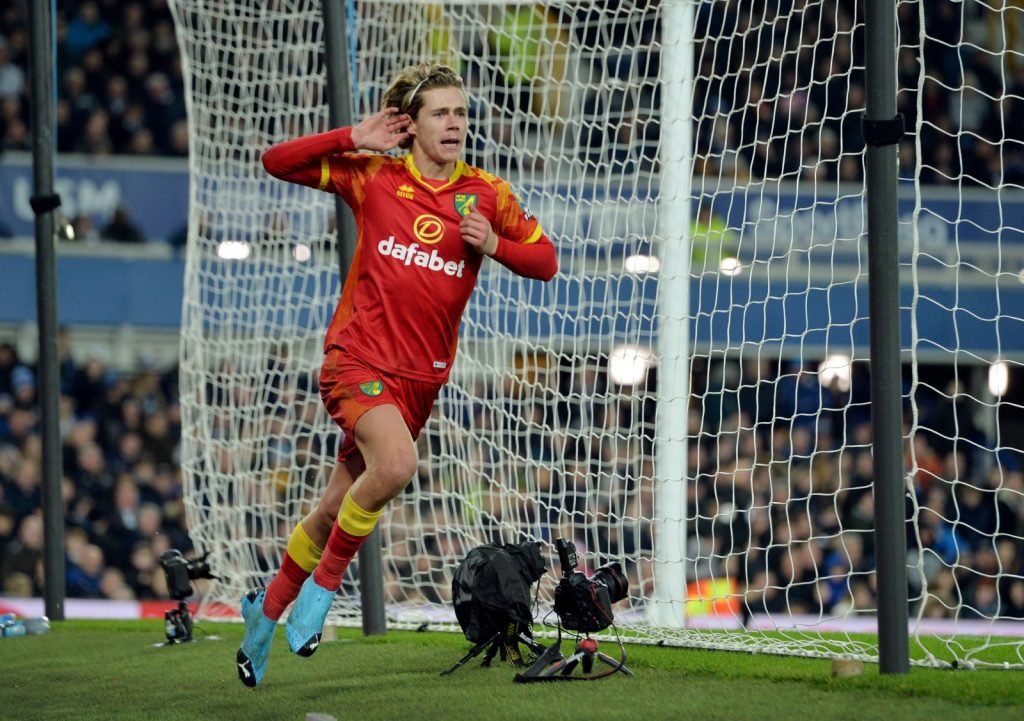 Everton huffed and puffed after that but there was a newly found resilience in the Norwich defence that bodes well for the future. If Farke can keep Godfrey and Zimmermann fit then there are reasons to be optimistic.

The return of Zimmermann will allow Amadou and Tettey to play in their preferred central defensive positions and although Trybull flourished alongside Tettey at Goodison, against a Toffees’ midfield that was willing to concede space and time, we will probably see both of the aforementioned enforcers playing in tandem at times. Places like Stamford Bridge and The Etihad stadium spring to mind.

There was still time for a lovely ending though with Dennis Srbeny coming off the bench in the 91st minute only to score in the 92nd to make it 2-0 and send the long-suffering travelling fans home with a spring in their step. The goal owed much to Emi Buendia’s (on in the 80th minute for Cantwell) mazy run, with the ball running through to Sir Benny to finish as he was tackled by Pickford. 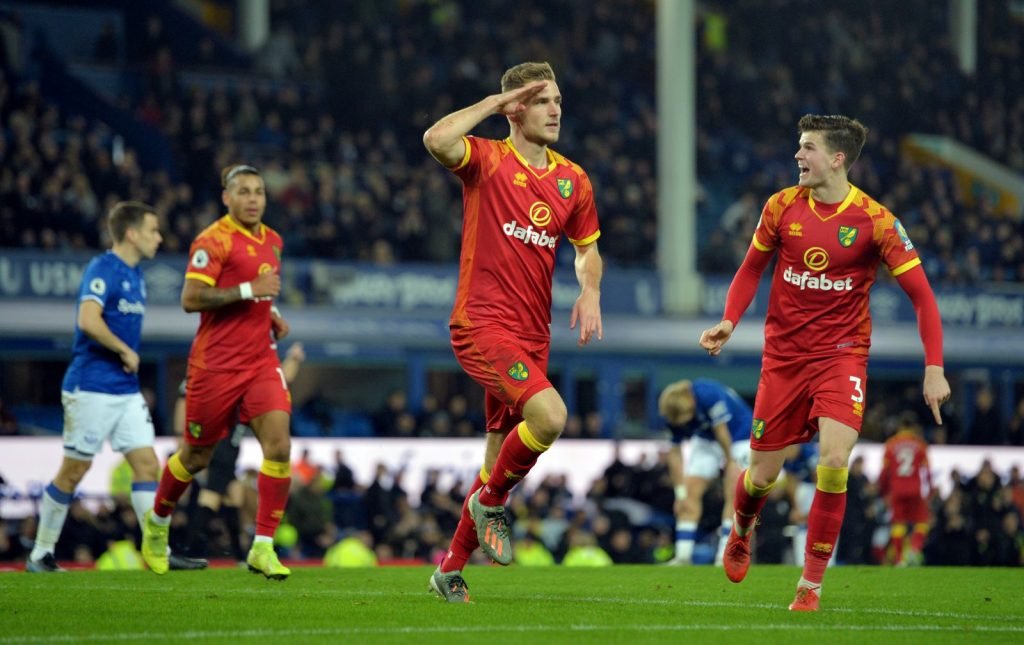 This wait for a win, since that incredible de-bagging of Manchester City back in September, has been tough on anyone of a Canary persuasion but Norwich were back to being competitive here.

No naive mistakes, no gifts to the opposition and a new found resilience. Perhaps my suggestion to not expect too much of Zimmermann who’d had an incomplete pre-season, hadn’t played for nearly three months and was back five weeks ahead of schedule from a nasty ankle injury, was wide of the mark.

It seems that I’d forgotten how much of a man of steel that Christoph Zimmermann actually is.