The Pukki Party Shows No Sign Of Ending Anytime Soon 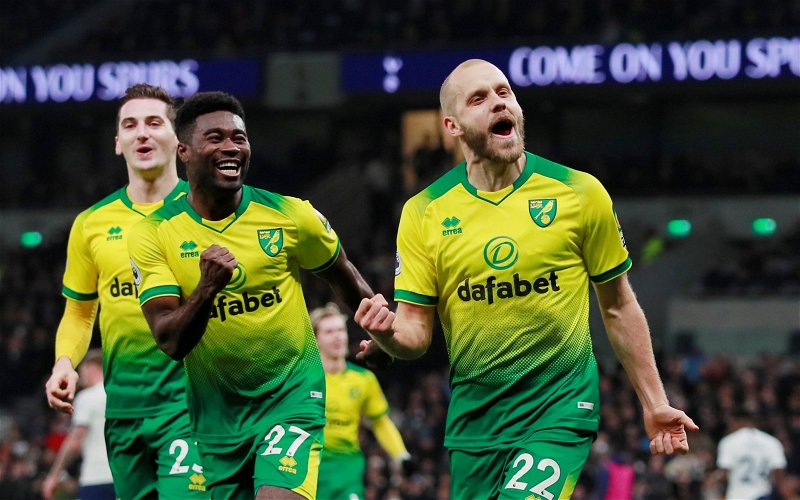 Is there another player in Norwich City’s recent history that has had such an effect in such a short space of time as Teemu Pukki?

If I’m honest, I can think of two other players, both forwards, that have had a similar impact – Darren Huckerby and Grant Holt. Having said that though, neither of them cost the square root of nothing. Holty cost £400k, which was paid for partly by season ticket holders not requesting rebates and Huckerby cost around £750k, partly financed by a local businessman.

Grant Holt grabbed Norwich City by the scruff of our neck and dragged us with him as he scored the goals that took us and him into the Premier League. Huckerby’s contribution was equally as dramatic and both times these players were the standout stars in their respective teams.

Imagine a team with all three of them in their pomp at the same time!

Getting back to our current hero, Teemu Pukki has just achieved the rather special accolade of scoring 50 goals in 100 appearances for the Canaries. The fabled strike rate of one goal every two games is something that all centre forwards aspire to and as I mentioned, the fact that Norwich have a player that has done it/is doing it and that he cost nothing, is all the sweeter.

Pukki arrived as an unknown really. I remember thinking to myself “Isn’t he the lad that replaced Gary Hooper at Celtic and didn’t cut the mustard?” but I really had no idea other than that as to who he was or what he could do. Mind you, as with any new signing, I rarely judge anyone without seeing them play for myself, how can you? I know that there was also some moaning on social media (quelle surprise) at the time as well that he hadn’t cost a fee and that therefore, it must surely follow that he wouldn’t be any good.

Oh, how wrong they were.

Initially he played as a number 10 behind Jordan Rhodes and he got his first goal in that crazy 4-3 home defeat at the hands of West Brom but it wasn’t long before Rhodes was warming the bench and Pukki was the lone striker in Daniel Farke’s 4-2-3-1 formation.

The rest, as they, is history.

In the Premier League, Pukki managed 11 goals in 36 appearances but struggled after scoring away at Leicester in December when he ended up badly bruising his toe in a challenge later in the first half. After that, he seemed to struggle and as City’s only really effective striker at that time, the workload he had to shoulder, not to mention his toe, eventually became too much. He, like the rest of his team mates began to struggle and not even Finland’s prize athlete could do it all on his own.

Having returned to the Championship this season, there was no guarantee that Pukki would return to his old ways and destroy the division with goals a plenty, as he had done two years earlier, but after a slow start he now has 9 for the season after his most recent brace against Blackburn last Saturday.

There are some interesting stats to go along with his 50 goals in 100 games.

Of all the players to have reached the 50 goal mark for Norwich, only three have a better strike rate – Roy Hollis with 0.55 goals per appearance, Ralph Hunt 0.55 and Ron Davies on 0.52.

Pukki has taken 275 shots while playing for Norwich, resulting in those 50 goals, which is a conversion rate of 18% with a shots on-target rate of 40%. He has scored a goal every 163 minutes, thus far, on average.

Pukki scores all sorts of goals. He scores with both his feet and occasionally with his head and on Saturday he scored with his shins too. He has scored 72% of his 100 goals with his right foot but he has a surprisingly powerful left foot shot on him, as well.

Which one is your favourite? 🤔 pic.twitter.com/NKW5h5cBKR

As is always the way though there is a “BUT”, although in this case, it’s not a “BUT” that is an issue with Pukki. It is a familiar issue for Norwich though, in that if he is injured (not that this happens too often) or loses form (like he did after Christmas last season) then there is nobody of a similar or even relatively similar ability to replace him. I suppose that is always the issue for a club like Norwich, isn’t it?

Last season, he had Josip Drmic and Dennis Srbeny to back him up and this year he has Jordan Hugill and Adam Idah. Young Idah is out until February with injury and Hugill has yet to get a real chance to show his mettle. In the Premier League, the poor Drmic was never really close to being a replacement and Srbeny was allowed to leave in the January. Norwich rely on Pukki, just like the Finnish national side do.

He has brilliant movement and the Buendia through ball has become one of his regular ways to score a goal. He is not lightning quick but his anticipation and timing will often see him one-on-one with the opposition keeper, a position he rarely misses from.

In short, Norwich managed to bag themselves a striker who was just coming into the form of his life, like they did with Grant Holt, and who cost them nothing other than his wages.

It really doesn’t get any better than that.

Teemu Pukki, the GOAT, we salute you.