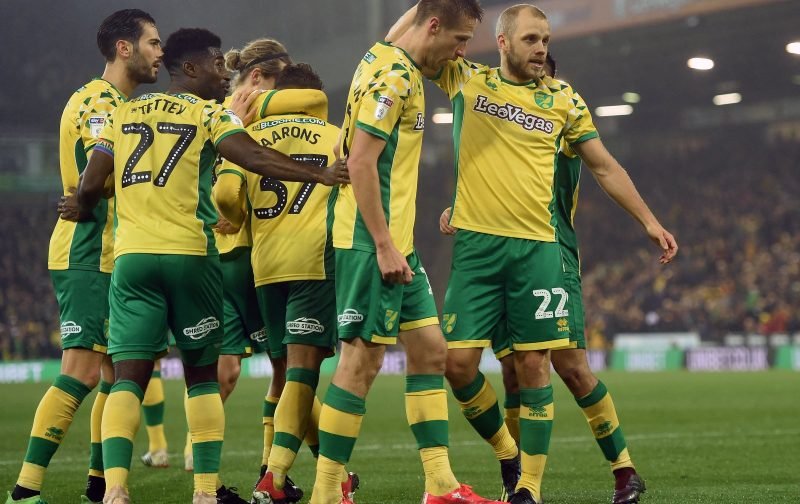 Paul Lambert used a couple of well-worn excuses in his post-match interview at the City Ground, having watched his beleaguered new charges well beaten by Nottingham Forest.

The first was that his squad contains a lot of young players and the second being that a lot of his players have had to move up from a lower league. The crux of it is that he doesn’t have a lot of experience in his ranks.

If you look at what Daniel Farke is having to work with at Colney, you will see that partly through financial necessity, he has had to blood some young players but the crucial difference is that they are good enough to do the business.

Making the old adage of “if you’re good enough, you’re old enough” look spot on, three academy graduates started for Norwich against Rotherham and they all played a huge part in how the game was won.

Todd Cantwell scored his first goal for his boyhood club in a very special moment and then he provided an assist for the prodigious talent that is Max Aarons. Max made a great run with the Millers’ struggling for energy late on and nodded a nice header past the woefully exposed Rodak. Todd was unlucky to lose his place in the side through injury to Onel Hernandez but as well as Onel has done, the boot is back on the other foot now and Todd is the man in possession of the shirt. After this performance, he may keep it for a while yet.

Jamal Lewis was also a very solid, cool customer despite the bizarre late substitution mix-up but it was Aarons that caught my eye on the day, along with Todd, of course, who won the sponsors’ man of the match award.

Aarons looks like he’s been playing at this level for years rather than a matter of months. I imagine that Lambert will be very envious of the young players up the A140 when compared to his own.

Was Tim Krul at fault for the Rotherham goal? It was a subject that came up on Canary Call with one caller saying that he felt that the only area City needed to strengthen in January was in goal.

I’m not sure I can blame Tim for that one, if I’m honest. He has worried me in other games, like last week against Swansea but I think his save against Will Vaulks was a decent one. It came through a crowd of players from distance and Towell, the eventual scorer was off-side. The problem arose from City switching off at a short corner and allowing Vaulks the time and space to fire in his strike. I thought that Tim did well to keep it out at all, never mind it going back into a dangerous area, a little harsh to call that an error, I’d say.

In terms of signing a new keeper in January, that seems highly unlikely to me. Michael McGovern will stay until his contract expires at the end of the season and he is likely to be on a big contract. For me, that means that nothing will happen in January, which is a tough time to buy a good player anyway. McGovern will be released in the summer and that then begs the question as to who becomes the number two keeper for Norwich?

Does Aston Oxborough step up? That’d be a big call and it would assume that Farke and Stuart Webber are happy with Tim Krul. Or, do they get another first team quality keeper, in the vein of Wolves replacing John Ruddy with Rui Patricio (maybe not that level of quality but you get the idea)?

Much will depend on whether promotion is attained. For now though, Krul is the man and a vastly experienced man at that.

The strength in depth of the squad has been evident throughout the season and it’s getting stronger with the return of Hanley and Marshall and the prospective return of Kenny McLean too. The difference seems to be that there are players on the City bench that can come on and make a difference now, something that hasn’t always been the case in the past.

Tom Trybull was a little unlucky to lose his place to Mario Vrancic but when he came on late against Rotherham, he created an “on a plate” chance for Teemu Pukki and got forward, just as he did against Hull. He also had the two best chances of the games against Hull and had he been playing regularly he might have taken one or both of them. He might have, we will, of course, never know.

My Point is though that this squad is strong throughout and doesn’t need much in the way of improvement in January, assuming there is no loss of key players to either injury or mega offers.

Another question from Canary Call was about Jordan Rhodes and if City were to be promoted, would he be a decent signing on a full-time basis? I’m still undecided on that front. Sheffield Wednesday would be more than happy to sell him, I’m sure due to his Premier League size salary but would he be good enough if we went up? I’m not so sure. Would I take him on another loan? Probably. Teemu Pukki would still be the main man but Rhodes and another striker (not Sir Benny) would be decent as back up.

Paul Warne got his tactics spot on for this game. He set his side up to press us high up the pitch and restrict our ability to play out from the back. At every goal kick, Tim Krul was faced with a Rotherham player marking all his usual options, inevitably meaning that he had to kick it long which played into the Millers’ hands. The fact they got the game’s first goal would’ve only added a cherry to the top of a very well organised first half for Warne’s men.

Fitness seemed a big factor late on for the visitors though, with City keeping their levels up and Rotherham completely folding after the second goal went in. If this match had ended up being 5-1, then there could’ve been no complaints. With a better team under his control though, Paul Warne might become a successful manager, considering his well-publicised reluctance to join the profession a couple of seasons back.