The Worst Premier League Season? Keeping Small Clubs Down And Along Come Norwich 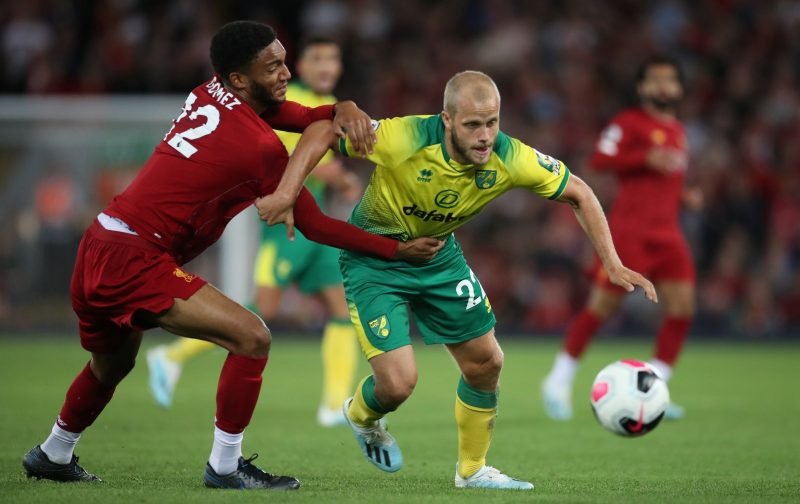 I don’t know about you but I’ve heard and read a lot lately that this is the “worst Premier League season” in terms of quality, for years.

It must be, right? After all, Liverpool are running away with it. The Red machine is currently on a run of 24 wins and a single draw from their first 25 games. That is an extraordinary set of results, not only the best in the Premier League era but in top-flight history across the generally recognised five best leagues in the world in England, France, Germany, Spain and Italy.

To try to emphasise just how impressive that is, it’s worth noting that they already have two more league wins than Manchester United’s treble winners of 1999 managed. Comparing Liverpool’s current stats to any other team in England or any of those other leagues I mentioned is just pointless because no other club has come close to this level of imperious form, ever.

Obviously, it isn’t a “normal” set of results and the bar for winning the league has clearly and obviously been raised.

Last season, Liverpool offered a big hint that they were on the verge of winning their first league title in three decades when they pushed Manchester City all the way, losing the title by one point, finishing on 97 points. That was a simply extraordinary end to the season.

However, while Manchester City have struggled and toiled against some of the league’s “lesser lights”, Liverpool have simply steam rolled over all that have challenged them. They’ve had a bit of luck, for sure. I’ve seen them play poorly (by their standards) and then still win a game that they looked like losing but something happens, like a VAR intervention and suddenly they’ve got the three points.

Talking about VAR, and I know it is a maddening subject, I bumped into an old mate the other day who I haven’t seen for months. He’s a Blackpool fan and as soon as we talked football, he told me how bad VAR was and how it was killing the game and, how it was killing Norwich City’s season.

“The Premier League don’t want Norwich in it, do they?” he said. Like any football fan, he’s seen Premier League games this season and like me, he thinks it should be completely ditched. We all know that the chances of that happening are very slim though, if not non-existent.

“Would Norwich have had a chance to re-take a penalty against Arsenal if that game was at The Emirates? That Todd Cantwell handball against Man United and what about the “goal” that Pukki scored against Spurs?” His perception and mine, is that big decisions still go for the big clubs.

Changes to the rules of the game always help to preserve the top teams’ places at the top table. Whether it be a crackdown on fouls, which naturally help the teams that have the most skilful, expensive and therefore more often fouled players, or as we now see, VAR in which things are being measured to the millimetre by a referee in an office with a latte on their desk.  For the fan of a less fashionable team, you know, like the one that happens to be from the place that you live, these interventions are tough to take and it feels like everything is against you.

Even then, when a team does break into the top flight and Norwich seem like a good example here, because they have assembled a young team of skilful players, their best ones are picked off by bigger teams and then the newcomer is swiftly put back into their box and returned to the Championship and the struggle begins again.

The top teams always remain in the Premier League and that guarantees them the huge regular increases in finance with every new TV deal that is announced. Changes in rules have made the game less and less unpredictable to the point that this just widens the gap, you can call it a gulf, between the likes of Liverpool and Norwich. If you are a supporter of a club in League One or League Two then you must wonder at all this and I assume, think that you’ll never, ever, get anywhere near it. You might as well be watching the Premier League in a bar in Taiwan or on the moon.

Anyway, next up for Norwich is a true David vs Goliath clash when the Champions elect come to Carrow Road looking to extend that outrageous run of theirs next Saturday. It feels just as concerning as when Manchester City were our upcoming opponents last September, although that didn’t turn out too badly, did it?

Liverpool are in imperious form and they will be rested nicely after a warm weather winter break, I think I read that they were going to Dubai. It doesn’t seem as though Norwich have organised their own mid-season club break, although the City players’ social media accounts have shown that they’ve had their own warm weather breaks. Emi Buendia has had a few days in Dubai, so there Mr Klopp.

On paper, it looks as though Liverpool will steamroller Norwich City next Saturday evening, live on Sky Sports so that all the armchair fans can drink a four pack of lager, neck some peanuts and enjoy “little Norwich” getting mauled by a much bigger beast at a time that means you can order a takeaway for halftime. Naturally, Daniel Farke and his squad will have other ideas and do their best to upset the odds, however long they may seem but it does feel like an ominous next match.

How should Norwich approach this game? Regardless of VAR and it’s nit-picking, I think they need to try to be physical and stronger than usual. Some steel is required and for me that means Tettey and Trybull in the midfield. There will be no change of formation, of that you can be sure, because Farke seems to like what he knows the best. Buendia needs to be back in but maybe Lukas Rupp should replace Todd Cantwell to add more strength. “get into them, F**k the ball!” as the chant goes.

In recent games, Liverpool haven’t just smashed their opponents though and it certainly hasn’t been like that in their Champions League campaign either. Close wins over Spurs (1-0), Man Utd (2-0) and Wolves (2-1) show that the Reds were seriously tested in those matches and it seems clear that they have had to fight hard for these wins. They’re not just rolling teams over 4-0 every week, like Guardiola’s Manchester City have done in the previous two years. Norwich play an ambitious type of passing football in the Guardiola mould, something that despite the 4-1 score line, they showed at Anfield on the season’s opening night.

Norwich will give Liverpool a game and they will try to beat them. They won’t sit back because in this position, they can’t afford to. It’s do or die time for their campaign and whilst Fantasy football coaches triple Captain Mo Salah and every bookie in the land will dismiss the Canaries, we will be there and we will have a level of hope and support that those armchair peanut eating, remote control holding, Fosters swigging fans simply don’t understand or will have ever experienced.

Seems like this is a classic “along come Norwich” moment, to me.