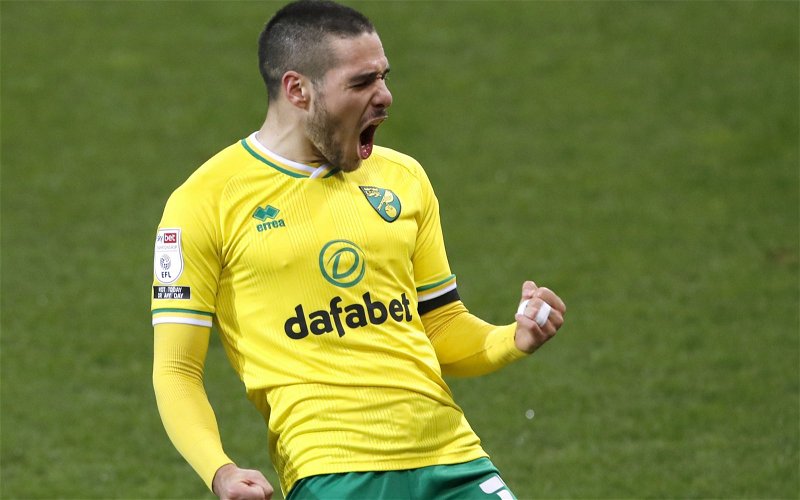 Will it be this weekend that Norwich City are promoted?

The Canaries need just one two more points to grab one of the two automatic promotion places and that’s assuming that Swansea and Brentford are perfect and win all of their remaining games.

There are five games left and Norwich have an eight point lead at the top over second placed Watford with consecutive matches against first Bournemouth and then Watford in the next four days. Those games look tough on paper, with both of those opponents having beaten us at their respective home stadiums, both games are at Carrow Road though.

This feels like a big moment in the season, an acid test almost, as Norwich look to stamp their authority on the league. These games remind me of the match against Leeds at Elland Road in the spring of 2019, when the Canaries dominated their (then) nearest rivals in their own backyard, coming out 3-1 winners on the night.

That was a statement victory and City never looked back as they ran out league Champions with a memorable 2-1 win at Villa Park on the last day of the season which sealed the title – one of my favourite days out as a supporter.

Norwich are a different animal this time around though, being much tighter in defence, while still having a formidable forward line. If Norwich can beat Bournemouth and then Watford it will be the perfect way to seal the title.

The importance of gaining promotion at the first time of asking has never been more important for this football club, especially in the post-Covid days to follow. We’ve read that such deeds are fairly uncommon in recent times but doing it the Norwich way has worked out a treat.

The infuriating lack of investment last time around in the Premier League was a strategy. It was designed to get the club back into a stable position financially and to invest in facilities in particular. The Colney training ground is now a first class training facility and something that I remember Ben Gibson commenting on last summer. I remember him saying how impressed he was with it and let’s be honest this is a place that is going to be where you do your day to day work.

If in whatever line of work you’re in, you had a few different companies headhunting you and you had offers from three companies, all to do the same job and for the same money in your pocket, things like working conditions are going to come into play. If you’ve watched the Amazon Man City documentary then you’ll know how impressive a training ground can be and from the videos and pictures I’ve seen of it, Norwich now have some very fine working conditions to offer prospective new recruits, rather than a gym in an old conservatory as things used to be.

The global pandemic has hit every type of business hard but the entertainment and sporting sectors, who rely on crowds to fund them mostly, have been hit particularly hard. Outside of the Premier League in England, crowds buying match day tickets, pies and pints are crucial for football clubs as it’s their main source of income. Having just been relegated, Norwich, Watford and Bournemouth all have financial cushions in the form of parachute payments and that has helped them all this season.

All three of the relegated clubs have, for the most part, held on to their best players and it is no coincidence that the rest of the Championship’s protagonists have struggled to keep up with the top two. Norwich have been out in front all season but Watford have eventually shown their class too, albeit with their usual scatter gun approach to hiring and firing managers. More often than not, just like Chelsea, it seems to work though, bizarrely.

Bournemouth should be in a better position than they are but their failings have been the top two’s gain as a serious contender for promotion has spluttered along, eventually finding some form in the final weeks of the season. They now look a dead cert for the playoffs and none of the remaining top six will want to play them, you can be sure of that.

Having said that, if Bournemouth don’t make it straight back up via the playoffs then they are going to start to struggle. They were bank rolled to a seemingly unlikely promotion by their Russian billionaire owner (no fairytales here) in 2015 and could never have achieved what they did as a self-funded club. Once in the top flight, it was TV money that kept them there, allowing Eddie Howe to invest in some very good players but if it went wrong, like last season then they were going to be in trouble.

They rely on Premier League TV money to operate at the level they have been. There has been next to no investment in training facilities and their corporate department, so important at Norwich, has, I think I remember reading in The Athletic, just a couple of people running it. The same article suggested that something like 90% of the Cherries income came from those TV rights.

Without them, they will sink like a stone, assuming that financial fair play is looked at more strictly than it was in 2015, because their owner won’t just be able to throw money at the club in the Championship now.

At least you’d hope not – playing fields should be level, after all.

The hole in Norwich City’s finances this season is around £20m and the sales of Ben Godfrey, who by the way is growing into an excellent player, and Jamal Lewis helped to plug the gaps. The signings of Gibson, Jordan Hugill, Xavi Quintilla and Dimitris Giannoulis will have had plenty of envious eyes upon Norfolk, I can assure you, and parachute money will have helped all that.

Make no mistake, if Norwich had failed to go up this season, then next season they would be considerably weaker and it would just get harder from there. Would Norwich have been able to persuade Max Aarons, Emi Buendia, Todd Cantwell and Teemu Pukki to stick around for another year? No, of course not.

There’s no doubt that this has been a special season for the Canaries, who are being praised in some media quarters as the best second flight team ever. That’s a pretty impressive accolade but it is, of course, subjective. What I do know though is that for those clubs left trailing in the wake of the top two, promotion via the playoffs is going to be massive this season. It could literally make or break a club’s future.