“There’s Nothing To Lose, Just Something To Win” – Norwich v Liverpool 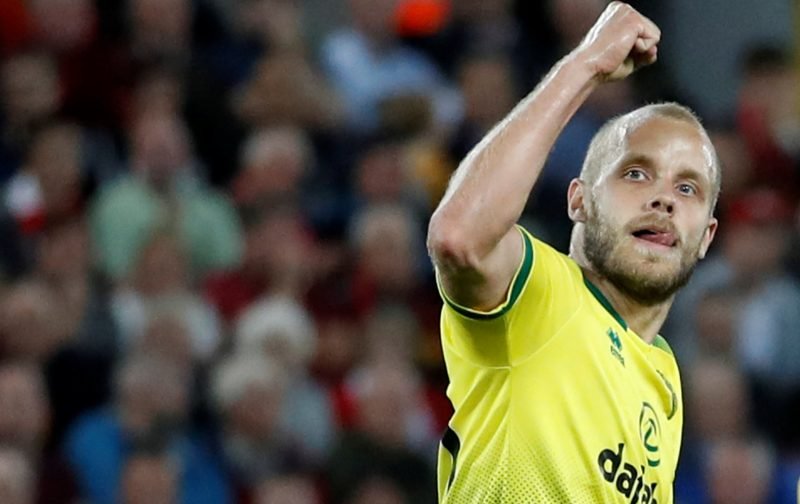 A tough task awaits then.

Liverpool appear, from my rudimentary watching of European football to currently be, arguably, the best team in the world. They have beaten 24 of their previous 25 opponents this season and now, along come Norwich.

Rooted to the foot of the Premier League table and with only four wins all season, it would appear to be Mission Impossible for the Canaries this weekend.

Football, as they say, is a funny old game though and ultimately it’s 11 v 11 once the players step over the white line. Sure, the chances of an upset are slim and plenty of fantasy football managers will have captained Liverpool players this week, expecting a drubbing to be handed out by the runaway league leaders but you never know. It was the same when Manchester City rocked up last September.

Anyway, Daniel Farke is pretty steady in his comments during his pre-match press conferences and it’s no different this week. Speaking to the assembled media at Colney on Friday lunchtime, he was keen to express the positives, as well as his admiration for compatriot Jurgen Klopp’s team.

💬 The boss is about to address the media ahead of #NORLIV tomorrow evening. Updates here ⬇️https://t.co/Gp3ysElSas

“There’s nothing to lose, just something to win.”

That is, I think, the best way to consider and approach this game. The City Head Coach has no new injury issues and other than Timm Klose, who continues his rehabilitation at a pace judging by his Instagram, he has a fully fit squad to choose from. He also has three fit centre-backs for only the second time this season. Ben Godfrey has served his three match ban after his sending off against Bournemouth, presumably meaning that Herr Farke has a few decisions to make with regard to team selection.

I wrote earlier in the week that if I were in Farke’s shoes that I might be tempted to play three at the back, using Zimmermann, Godfrey and Hanley with Aarons and either Lewis/Byram as wing backs. It’s a system that offers a bit more strength at the back as well as providing width and pace with wing backs. Whether Farke is that bold or not is another matter. He hasn’t tended to deviate from the 4-2-3-1 that Norwich normally play, over the last two and a half years very often.

A change of formation just might give Klopp something else to think about. Maybe I’m being too optimistic here but why not make the Red machine respond to us, just to mix it up and try something different?

Farke again said that if he is fit, Ben Godfrey plays, which means that if he doesn’t decide to play three at the back then one of Zimmermann or Hanley would drop down to the bench. Considering that Grant Hanley has played pretty well since his own return from injury, I think that is going to be a very tough call.

If Farke did go with my three at the back idea then it would mean changes further forwards too. Alex Tettey is a given as one of the three in midfield. His defensive skills, as well as his ability to drive forwards is still unrivalled in the City squad, so who would play alongside him? You could take your pick from Mario Vrancic, Tom Trybull or Lukas Rupp with Emi Buendia obviously being needed to provide that little bit of magic. Teemu Pukki plays, naturally, but could have either Todd Cantwell or Andrej Duda playing just behind him with the ball and then dropping into midfield when we don’t have it.

Whatever Farke decides to do, this is basically a free hit and getting anything out of it at all would be considered a major achievement.

If you’re going, enjoy the game and remember you Liverpool fans, it could be windy so no plastics, please.

Norwich police have advised Liverpool supporters that, due to expected strong gusts of winds during tomorrow’s game, that there will be no need to bring plastic fans.