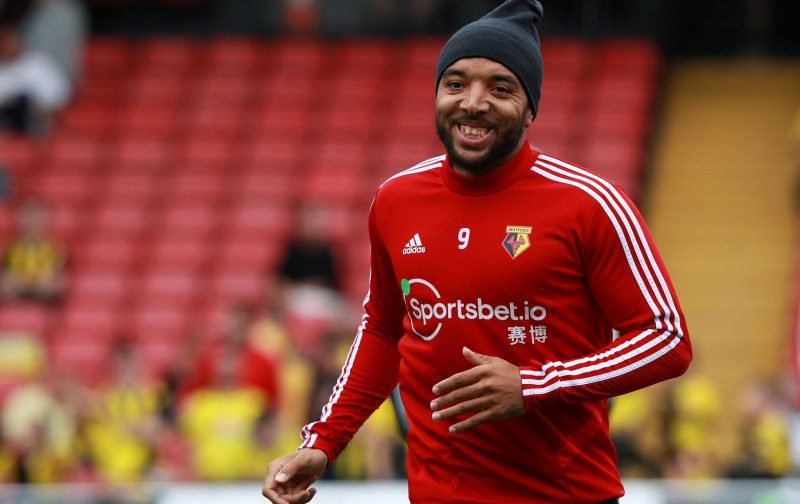 Watford Captain, Troy Deeney said on Tuesday that he won’t return to training in the current climate due to fears for the health of his young son as well as concerns surrounding BAME players.

Watford captain Troy Deeney has said he will not return to training this week amid concerns for his own son's health, as well as that of BAME players.

That was followed later in the day by news that six people had tested positive for COVID-19 in the first round of Premier League testing after it was agreed that Premier League clubs could resume training.

“We’re due back in this week. I’ve said I’m not going in. It’s nothing to do with financial gain,” Deeney said on Eddie Hearn and Tony Bellew’s Talk The Talk podcast. “When I go into full detail about my personal situation, everyone here will go ‘no problem’.

“My son is five months and he’s had breathing difficulties. I don’t want to come home and put him in more danger. You’ve got to drive in in your own kit, you can’t have showers, then drive back in the same dirty kit you’ve got.

“If I’m putting my clothing in with my son’s or my missus’ it’s more likely to be in the house.”

“Within the meeting I asked very simple questions. For Black, Asian and mixed ethnicities they are four times more likely to get the illness and we’re twice as likely to have long lasting illnesses,” Deeney said.

“Is there any additional screening? Heart stuff to see if people have got problems? No. Okay, well I feel like that should be addressed.

“If going forward, in phase two and three, which are going into smaller groups of three to six people, is there a clear layout if we hit certain targets then we will transition into 11 v 11? No, it’s six days of this, seven days of that, then a week until you’re playing.

“They want the first game to be June 12, so we’re only like three-and-a-half weeks away from that, so my thing is the transition is really fast.

“While we are being tested and while we are going to be in a very safe environment, it only takes one person in the group. I don’t want to be bringing that home.”

Interestingly, Watford have announced overnight that they have had three members of staff test positive in this first round of testing. That seemingly validates Deeney’s stance immediately.

ℹ️ Watford Football Club confirms that three people have tested positive for the Covid-19 virus following testing at the training ground over the past 48 hours.

He also said: “I just said the simplest thing. I can’t get a haircut until mid-July, but I can go and get in a box with 19 people and jump for a header. I don’t know how that works. No one could answer the questions, not because they didn’t want to, but because they don’t know the information.

“I just said ‘If you don’t know the information, why would I put myself at risk?’.

I noted several responses on Twitter from fans of other clubs that said something along the lines of “Simple. Don’t play, don’t get paid.”

That’s not something that seems to bother Deeney and why should it? We’re talking about a man, likely to be a millionaire, that has genuine concerns about health.

“I’ve lost my dad, my gran, my granddad… I’ve more or less everyone that I care about. So that, to me, is more important than a few quid in my back pocket” he added.

During this podcast, which is very, very good, by the way, Eddie Hearn said that he has spoken to people in the insurance industry about what happens if a sportsman were to contract COVID-19 and then suffer permanent lung damage that prohibited them from continuing their careers, would they be covered? The answer, he says he was told, was “Not really, unless a club wanted to pay a large, unrealistic premium.”

It should be noted that no Norwich City players or staff have tested positive but according to Michael Bailey, that’s because they have only just begun testing at Colney yet.

It is now 7 days isolation for those 6 PL players/staff who tested positive.

As per my colleague @peterrutzler, Bundesliga had 10 positive results from their first round of tests – a sample of 1,724 compared to the PL's 748.#NCFC @TheAthleticUK

There continue to be an incredible amount of issues surrounding all this and it is so easy to have a pop at a player from a relegation threatened club with genuine, realistic concerns about health with accusations along the lines of “You’re only saying that because of the position you’re in.”

That is simplistic and ignorant. As Tony Bellew said when speaking about why not wait and the apparent rush to get back to playing football “Football can come back from this, you can’t come back from death.”

Hugely valid points all round but once again, as Jamie Carragher admitted in this same podcast, there is so much money involved that effectively, the show must go on because.

Attitudes will change from person to person and from player to player though. In terms of Boxing, as you will hear from Mr Hearn, if you’re Anthony Joshua or Tyson Fury then you  can wait until September or longer,  but if you’re a young up and coming fighter or a journeyman then this is your livelihood and you need to pay your bills.

In football, especially at lower levels, loads of EFL clubs will not survive if the industry waits for a vaccine to be developed, as Joey Barton points out. He also mentions the huge number of players who are out of contract in the summer and may not get another contract due to lower league finances.

As I say, this is a fascinating watch and hearing different views is always useful.