Webber And Smith Look To The Future 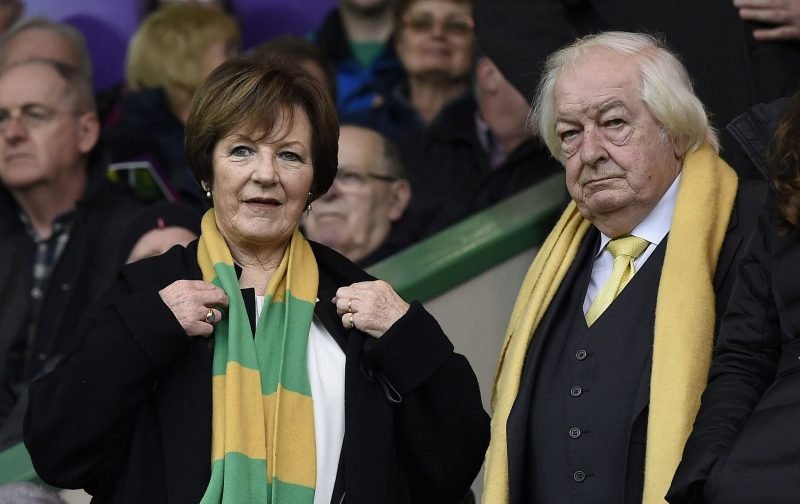 Just in case you`re not a Guardianista (a regular Guardian reader), I thought I`d share with you an article that is in the paper today and online at theguardian.com which you can read here

The article concerns Norwich City and features direct quotes from Delia Smith and Stuart Webber about the club`s future and the new academy rejuvenation project, which if you watched Look East last night you will have seen is already underway.

The money for that has been raised by the £5m Canary bond, funded by supporters and facilitated by Gianluca Vialli`s “Tifosy.”

The upgrade of the facilities and pitches, is all designed to keep the Academy`s Category A status with the intention of helping to self fund the club in the future by producing youngsters capable of the first team. In fact, this article says that Webber intends that the Academy will produce at least one young player capable of starting for the first team each year.

That will no doubt be behind the decision to pick up young players from around the country, a policy that has been quietly happening behind the scenes with little fanfare throughout Webber`s first season in charge.

The likes of Adam Phillips, Savvas Mourgos and most recently, Mason Bloomfield from Dagenham & Redbridge are all going to be benefiting from the new facilities and will hopefully become better players, capable of Championship football for Norwich City, because of it.

“This change of strategy has been the best experience I`ve had since I`ve been a board director,” Delia Smith says. “I think the structure of the all-singing, all-dancing chief executive, you could see in the end that can`t really work. You can`t have a one-man show. My big dream has always been that we work together and in the past that hasn`t always happened.

“On the academy side I feel very passionate. Not many people listen to me much but when I first became a board director [in 1996] I went to visit a football club called Auxerre and their manager, Guy Roux. The first thing he said to me, and he didn`t speak much English, was: ‘I never buy footballers.`

“The academy had their own little stadium, they had houses built on site. Roux knew all the youngsters by name. And the record is there, isn`t it? They played in Europe, they never went out of Ligue 1. And Auxerre is the size of Thetford. Wow. That`s the kind of club I want Norwich to be. I want it to feel like it is part of the community.”

Webber has set about preparing the club for life without parachute payments and has cut the wage bill, while also lowering the age of the squad this season. It is clearly all designed to help Norwich be an effective self funded club in the future and for that to happen, the club are going to have to produce young players for next to nothing and then sell them for tens of millions.

The value of young British players these days is incredible so the “tens of millions” I just quoted, isn`t impossible. So much so that we are talking about James Maddison being worth around £20-30m, depending on which media report you read.

This is a standout Championship player but he`s untested in the top flight and has just a handful of England U21 caps.

With Maddison though, I think there`s little doubt that he`s going to be a top player and the fact he`s English only increases his value for the Canaries. The way he was picked up, despite it being nothing to do with the new regime and recruitment team, is exactly the sort of player we will be looking for in the future, although at a reported £3.5m, yes we will make a huge profit but the club will be looking to identify youngsters without even the need for that sort of outlay.

In our current financial situation, I doubt we would now spend £3.5m on a player in a situation like Maddison`s at Coventry two and a half years ago. The risk may be more than we could afford to gamble.

“Why don`t the board release the purse strings? Well, I certainly feel that my experience of the Premier League was that we never had any money. Even if we got promoted this year, we still wouldn`t have had any money, the way the wages are. I think the first time a supporter came up and gave me a rollicking face to face I was bit shocked. But you do get used to it over time. And I do understand their passion. I know.”

“If you are a football supporter you understand. But I think perhaps the younger ones now don`t understand how it was before the money started corrupting it.”

You may remember the last time that Delia spoke to a national newspaper about Norwich City, it was Henry Winter at The Times and in that interview, she basically said she would be gifting the club to her nephew, Tom Smith when the time came.

That brought a lot of wailing and gnashing of teeth from the Canary Nation as we struggled to understand what nephew Tom could bring to the table, at least as we looked from the outside in.

Now though, there seems to have been a slight change of tack with Smith talking about being open to new investment and also being willing to consider putting the club into fan ownership – something I would be very wary about.

What we now have folks, is something of a brave new world. I like the fact that we have gone in a different direction and that a different approach is being taken, it`s quite exciting, although we have yet to see much evidence of this on the pitch yet, understandably.

If you could fast forward into the future five to ten years, I`d like to think that City would be regularly producing excellent young players in the mound of Southampton. It`s certainly no fluke that the Saints have been doing that so well for so long. The inevitable sale of those players will help self fund the club going forwards. That is obviously what the design of all this is.

In the short term, Daniel Farke is being asked to provide success on the pitch to an army of supporters who have lost patience with the style of play he is trying to implement. Those supporters have known more success in the last decade than fans have arguably had in the club`s history, certainly fans of my generation.

The expectations are high.

Another season like this one, albeit one that has been interrupted by injury to the likes of Trybull, Tettey, Leitner, Oliveira and now Hernandez, will not be acceptable to those sitting in the stands.

This is a long term project, rather than what has gone before. We just have to trust Webber, Farke and Steve Stone to get it right.