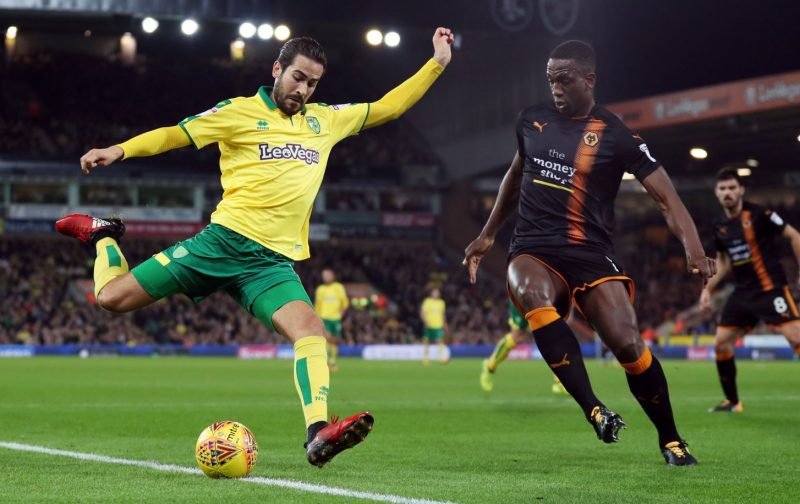 A little more transfer speculation for you but it might not happen today, concerning Ivo Pinto.

According to the Daily Mail’s Midlands Football Correspondent, Laurie Whitwell, the Portuguese full Back is a possible target for West Bromwich Albion, as reported here by Birmingham Live.

The Baggies have been looking to sign a right sided defender and have been rebuffed in their attempts to sign Glasgow Rangers’ James Tavernier.

That leaves the Baggies looking at other options and according to the Mail’s transfer deadline day blog one of those options could be Pinto.

“Norwich’s Ivo Pinto presents a potential alternative but that would probably be a loan so could be done any time before August 31.”

Ivo, 28, is now inside the final 12 months of his contract and is likely to be on a decent salary. With the arrivals of Ben Marshall and Felix Passlack, not to mention the emergence of Max Arrons, the right side of defence is now well stocked.

Meanwhile, the Press Association’s Nick Mashiter reckons that the Canaries still need to trim their squad and would be willing to listen to offers for a number of players, including Mario Vrancic, which is a surprise.

A bloated squad at Norwich – over 30 pros – still needs to be trimmed. A successful deadline day (even though it isn't really one) would be a few outs at Carrow Road. #ncfc

With that in mind, midfielder Mario Vrancic is one Norwich are prepared to listen to offers for, #ncfc

Usual suspects of Oliviera, Martin, Jarvis and McGovern can still go but that's been the case for a number of months.
It would be helpful to trim the wage budget again. #ncfc

It seems that the ability to still do loan deals as well as selling players abroad could mean that this transfer window is far from done yet.