Wilder Wins LMA Manager Of The Year Ahead Of Guardiola, Klopp And Farke? That’s A Joke, Right? 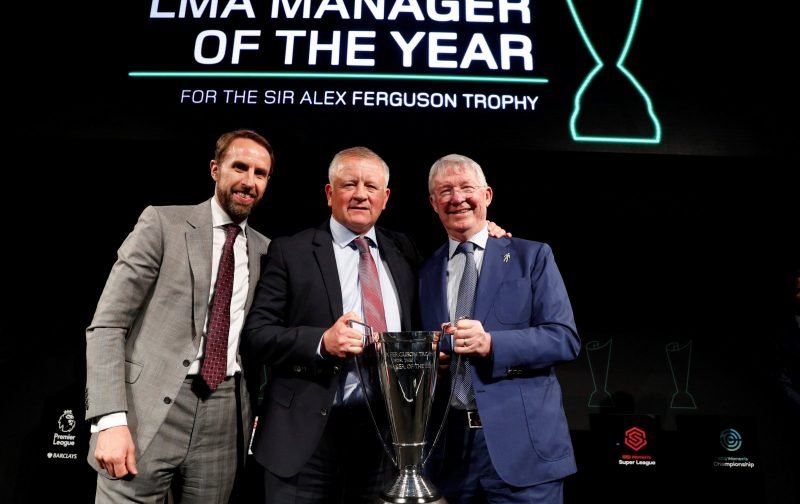 There’s been a lot of brouhaha over the last couple of days about Chris Wilder being named the League Manager’s Association (LMA) Manager Of the season for 2018/19 – particularly in this corner of East Anglia, but is that correct? Should Wilder have beaten Pep Guardiola, Jurgen Klopp and Daniel Farke to the award?

I might have a slightly unpopular view on this but just hear me out.

Just like most of you reading this, assuming your football allegiances lie in the colours yellow and green, I was more than a little taken aback when I read that Chris Wilder had been named the LMA Manager of the Year.

What? Sour-faced Wilder, with his moaning if the slightest thing goes against him, has been voted the best manager in the country ahead of Pep Guardiola, Jurgen Klopp and Daniel Farke?

You’ve got to be kidding.

However, when I thought about it logically and when prompted by this tweet, I started to understand the thought process behind the voting.

For all #ncfc fans let me make this clear

Norwich were team of season. A brilliantly assembled and coached squad put together by a upstairs structure working wonderfully with little outlay

Wilder is manager of year. No structure upstairs. Even smaller outlay on wages. L1 squad

In many areas. In L1 2 years ago. The epicentre of all that is good about our club is wilder. We wouldn't be promoted without him

On Tuesday, the EDP’s Paddy Davitt had written a slightly salty column in which he said that the award going to Wilder left a “sour taste” and pointed to Daniel Farke only receiving one Manager of the Month award last season (December). Farke was the only divisional title winner to be snubbed, he wrote.

Mick Harford (Luton Town) won the League One award and he was only caretaking there for half a season, caretaking over someone else’s team too.

“Yeah, that’s a joke” was my initial thought. “Better than Pep and Klopp?” it’s a conspiracy!

If you dig a little deeper though you can start to understand the thinking of the LMA membership’s voting process and that tweet and start to think a bit more objectively.

Let’s start with Norwich and what Farke has done in his two seasons there.

The facts are clear. He has managed to take a club that was crippled last season by ineffective, high wage earners and the impending loss of parachute payments, and who finished mid-table into a promotion/title winning team.

That statement above sounds like it was easier than it was though, to the casual reader.

City finished mid-table last season and had sold Alex Pritchard in January for £11m. They then sold James Maddison (£24m) and Josh Murphy (£11m) last summer, our two top scorers, and arguably therefore, no it wasn’t an argument, our three best players in order to balance the books.

City’s debts and poor housekeeping the last time they were promoted to the top flight were their own self inflicted wounds. Naismith and Jarvis offered very little, in Jarvis’ case nothing, to the cause and yet their salaries were seeing millions of pounds a year leaving the coffers with no benefit to the club. Millstones around our neck.

The job that Farke and Stuart Webber have done in assembling a team capable of winning the title by five clear points and eleven clear of third placed Leeds, is nothing short of incredible.

It’s worth pointing out that Farke is a Head Coach and not a Manager, there is a big and clear difference between the two.

The Norwich model is aimed at Farke being allowed to coach the team and concentrate on football matters with Sporting Director Webber being in charge of everything else.

The everything else that I mention there is the critical bit because the traditional English football model is one where the manager does everything. He has help, of course, but it’s Chris Wilder who is signing the players and deciding the players that he wants and then running everything else, including the day to day coaching.

The Head Coach model allows the incumbent to concentrate on getting the football right on the pitch without such distractions. It’s successful across Europe and in Germany it is the only way to do things and that’s the model that Webber went for, so it makes sense to have a German in charge of it.

There’s no escaping the fact that Norwich have spent four seasons in the Premier League in the last decade and that we are now the biggest yoyo club of them all, having received the most in parachute payments of any club, ever.

That makes Webber and Farke’s achievement all the more impressive though. They came into a club with a bloated squad and wage bill and with the money was almost gone. All that money had been spent very poorly indeed.

Thank god, the two of them arrived when they did.

Recruitment had to be on a very small budget and Farke managed to take other clubs misfits like Leitner and Trybull and turn them into title winners. Mo and Tom were acquired very cheaply and in Tom’s case, for free but for many reasons they had not been able to settle anywhere, despite their clear talent. Numerous coaches had given up on them but Farke knew he could get a tune out of them.

Farke is also lauded for his youth and player development and rightly so. He has developed Christoph Zimmermann, Onel Hernandez, Marco Stiepermann, Emi Buendia, the list is almost endless, into stars and he’s given youth it’s chance and been rewarded. These challenges were imposed on him though due to financial restrictions but he rose to the challenge and pulled off arguably the most incredible promotion and season in the club’s history.

So why did Wilder get the LMA award?

Well, as Blades Analytics explained briefly but so succinctly, Wilder has had to do it all on his own with a tiny budget and a board that are far from united in their view of doing things. If anything the power struggle between the Blades’ co-owners, Kevin McCabe and Prince Abdullah has caused huge unrest behind the scenes there.

Both men are making takeover bids and the High Court is currently considering those bids. Both own 50% stakes in Sheffield United and they are bitterly arguing over a buyout provision after the Prince invested in the club in 2013, as McCabe looked for new investment. Both men allege deviousness on the part of the other after they fell out in 2017.

Twelve months ago, by his own admission, Wilder walked off the pitch at Bristol City thinking that he was finished at Bramall Lane. The power struggle was threatening to tear the club apart and Wilder thought he was about to be kicked out.

McCabe insists that he still wants to sell the club and it seems that he and Prince Abdullah have managed to keep the acrimony between them away from the football squad and staff as much as possible.

The new found Premier League money is unlikely to make the on-going court case any easier to sort out.

With a background like that, the harmony that exists at Carrow road is a world away from the bitter in-fighting and argy-bargy at Bramall Lane, something that makes Wilder’s achievement all the more interesting/impressive.

Wilder took over at United in 2016 and won promotion to the Championship with the perennial struggling Blades. He set about making them Championship competitive and this season, after a dalliance with the play-offs last term, he has taken them back to the top flight for the first time since 2007.

Billy Sharp had the season of his life as a life-long Blades fan himself and the likes of Sharp, Fleck, O’Connell Duffy and Basham were all regulars in the League One promotion side. Baldock (MK Dons) and Stevens (Portsmouth) were also acquired cheaply from a lower level while David McGoldrick (Blades’ player of the season) was released by Ipswich due to not being able to stay fit and looking like a shadow of his former self.

I don’t think there’s any doubt that Wilder has got those players punching above their weight and coupled with his “all out attacking style” which involves overloading the forward areas with centre backs acting like wing-backs and playing at a high tempo, his tactics have worked.

Will it all work in the Premier League without serious investment in the playing staff? That’s a question for another day and it could easily be levelled at Norwich, although I’m confident that the players and set-up we have can ensure that we make a good fist of the Premier League.

No doubt Wilder will think the same of his boys.

Beating Guardiola, Farke and Klopp to this award is a sign of how highly the League Managers, and remember, they are the LMA Members who vote, think of what Wilder has done.

Both Klopp and Guardiola have had riches beyond the wildest dreams of City and the Blades to ensure that everything is right on and off the pitch. Anything that they want at Liverpool and Manchester City they get.

The Premier League has been a great watch as the top two have battled it out for the title but it hasn’t been such a titanic, epic struggle as the promotion battle in the Championship, with the top three going into the last six weeks with every chance of winning the title as they matched each other blow for blow. Much like Liverpool and Man City did.

I think and know that Daniel Farke has done a sensational job at Norwich to provide an unbelievably surprising title win. We’ve been the best team, no doubt about it but would Sheffield United have been anywhere near promotion without Wilder, bearing in mind all that is going on at Bramall Lane?

You could say similar things about Norwich and Farke, both men have accomplished incredible achievements for their respective clubs. I can see that from the outside, it would look like Norwich are a “rich” club and they’ve had hundreds of millions of pounds over the last decade to help them get back to where they are now. We all know that through mis-management of that money it wasn’t like that at all though.

What Wilder has accomplished is just as impressive in it’s own way and that’s why this is all even a question. Remember City fans, Paul Lambert won the LMA Championship Manager of the Season award in 2011 for finishing second to Neil Warnock at QPR.

That award was rightly seen as a recognition of an impressive managerial achievement by Lambert and City. Is Wilder’s recognition any different? You can argue it both ways but ultimately for Farke, I expect that it’s only one trophy that really matters to him. 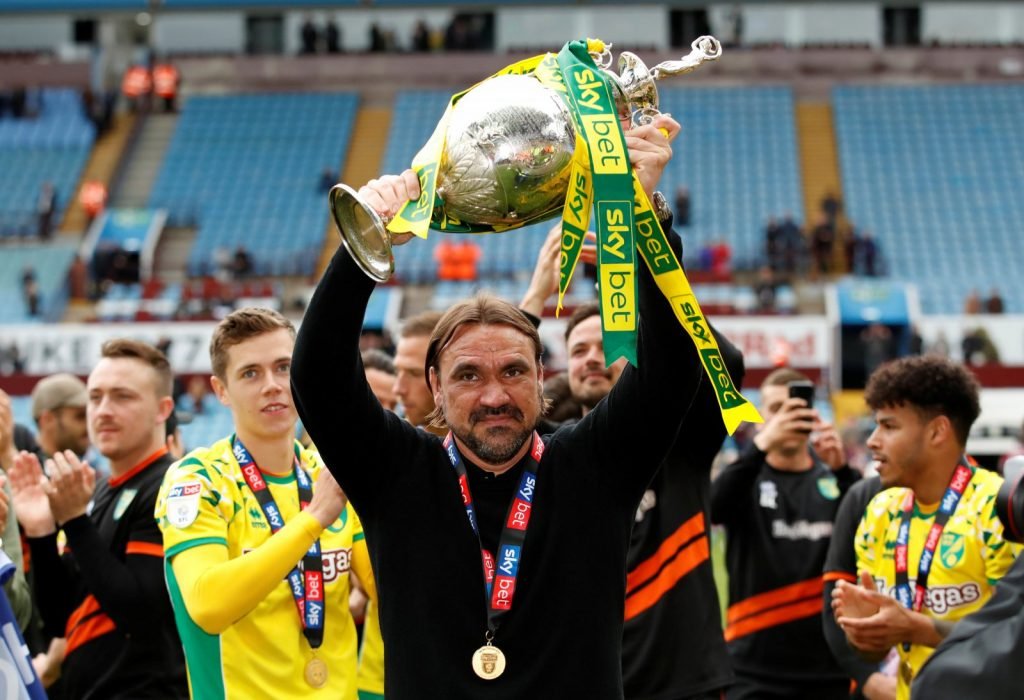