A Bit Of An Off Night At Watford, Farke’s Increasing Options And Extensions Galore 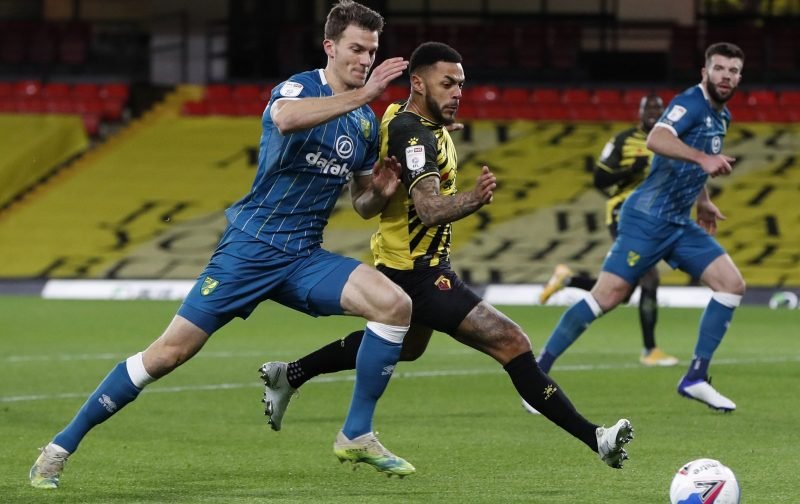 There was no fairy tale response this time, no late goal and no late intervention to take home a point or three from Vicarage Road.

Norwich being beaten by Watford was only their second defeat in seventeen games, which is no mean feat in this league. It’s why Norwich were and are top of the Championship table and why they have that cushion of points that will help them absorb the odd loss, as long as that’s all it is.

Norwich are still four points clear of second place and an away defeat to Watford, who are a very good side, does not exactly mean we all need to rush to sound the panic alarm.  The stats of the game showed that City were hardly well beaten – Possession was around the 65% mark and the Canaries had 16 shots to Watford’s 7 and 3 shots on target to the home side’s solitary on-target effort, from which they scored.

Norwich dominated the ball for most of the game and when the Hornets did get into their stride in the first 20 minutes of the second half, Farke went to a 3-5-2 and wrestled the game back again. Watford are a strong, well organised side and they have the best home record in the division (26 points from a possible 33), losing here was no disgrace and let’s be honest, City have played a lot worse than that and still won this season, haven’t they?

The sight of Kieran Dowell lining up as the number 10, with Buendia and Cantwell either side of him was a big positive when the team news was announced. The first time that all three had been available, mostly due to Dowell and Cantwell’s injury issues. As it turned out, Dowell and Cantwell struggled to get into the game at times but you can’t moan too much at either of them, Dowell especially, as they are still getting back into the rhythm of regular football and competitive matches. It’ll come and when everyone is back and fit again then that should be a line-up to put fear into any team in this league.

Emi Buendia was a little off the pace too, with things just not clicking for him here. He still played some wonderful passes though and he’s still the best attacking midfielder in the league. Ahead of him, Teemu Pukki had a quiet night and barely had much in the way of a clear-cut chance with Adam Masina timing his tackle to perfection as referee, Jon Brooks correctly  brushed away City’s late penalty shouts.

The introduction of Jordan Hugill to play up top with Pukki barely made an impression and already, I’m starting to think that if we were to be promoted come May, then scoring goals in the Premier League would be a problem again.

Most of the best attacking from Norwich came down their right hand side and it was clear that Max Aarons’ overlaps were more appealing to the City players to use than Jacob Sorensen’s on the left. A right-footed midfielder playing as a make-shift left-back has worked for Farke for the most part but with Xavi Quintilla fit again and on the bench at Watford, I wonder how long it will be before the Spaniard’s natural position and wand of a left foot see him back in the side?

Talking of Quintilla’s wand of a left foot, he has been badly missed for his dead ball deliveries. Emi Buendia has been standing in but his corners and set-pieces never get me excited and rarely produce anything that raises the heart rate, even a little, which is perhaps surprising when we all know his quality overall. In any case, it’s a part of our arsenal that has been missing if Mario Vrancic isn’t on the field.

The return to fitness of Hugill, Quintilla, Ben Gibson and Lukas Rupp to add some genuine game changing options to the bench is very welcome. It shows again how well the players that were fit have done to get to this point and be at the top of the standings with such an injury ravaged squad for most of October and November. The return of Adam Idah, Bali Mumba and, fingers crossed, Sam Byram, should only add to the competition and performance levels going into the new year.

We lost the game, now we need to start another run, starting with two great chances to do just that at home against QPR on Tuesday and then Barnsley next Saturday.

“Never too high, never too low.”

In other news, the contract extensions for both Idah and Tim Krul is very welcome. Coming just a few days after the announcements that young prospects, Tyrese Omotoye and Andrew Omobamidele had also extended until 2024, the news that Krul has extended is excellent tidings for the City faithful. He has become a huge player for the Canaries and hopefully will return in the next game or two.

✍🏻🔰#2024
So proud to commit my future to this amazing club for another 3.5 years. Felt welcome from the moment I walked through the door.
I can’t wait to add many more amazing memories. Stay safe and let’s make 2021 one to remember for the right reasons. #ncfc #NeverGiveUp 🎅🏻🥳 pic.twitter.com/tLTgX1lY9F

Idah is one for the very near future and his pace has been badly missed in the side of late. The extensions for Omotoye and Omobamidele, who look like being the next two off the rank, also means that the future continues to look rosy.

I hope you all had a great Christmas, present world-wide circumstances aside, and that you all have a happy and healthy new year.