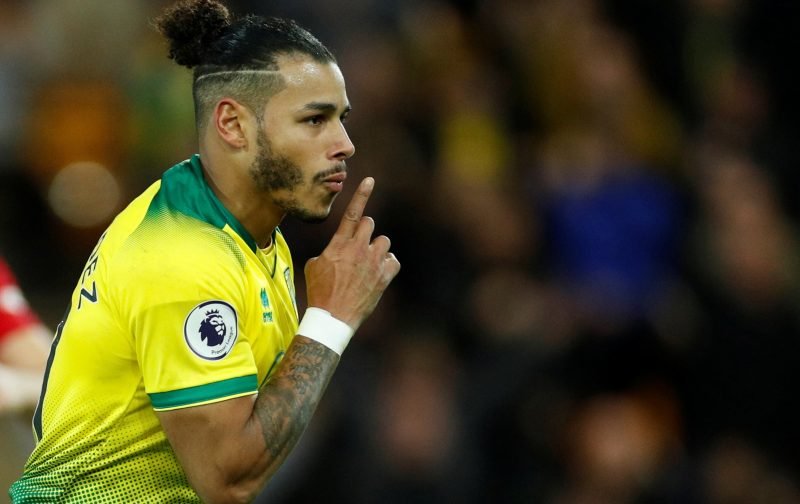 Norwich City were well beaten by Manchester United in a game that was dominated by VAR related controversy but started with a moment of reflection and celebration of the life of Duncan Forbes.

Not our day today but, on behalf of everyone at #ncfc, we thank all who took part in the minute's applause for Duncan Forbes before kick-off ???? pic.twitter.com/HLpFIerezm

The score finished up at 3-1 but could easily have been a lot worse were it not for the goalkeeping heroics of Tim Krul, who saved two VAR awarded penalties in the first-half.

United opened the scoring on 21 minutes when Scot McTominay fired home on the turn from the edge of the area. His inflammatory celebrations in front of the Snake Pit almost sparked a riot though.

What then followed was the drama of the first ever VAR awarded penalty at Carrow Road when Daniel James ran into the box and seemed to barge into Ben Godfrey, knocking both men to the ground.

Referee Stuart Attwell thought the same as me in real time, that it was not a penalty, only for the VAR referee, Mr Coote, to decide after a prolonged replay check that it was a penalty.

The delay seemed like ages and must’ve been somewhere between 2-3 minutes before Attwell pointed to the spot.

Tim Krul then got into role as Penalty Saver Extraordinaire as he paced back and forth, kicking the post, picking up and drinking from his water bottle before dramatically throwing the bottle down. Meanwhile Marcus Rashford waited with the ball on the spot.

When Krul finally took his place between the sticks, Rashford took a poor penalty to Krul’s right that the City keeper easily saved.

A short time later though and Rashford did get his goal when James found him with a huge cross field pass. He simply ran through a gaping hole in the City defence before striking the ball through the onrushing Tim Krul’s legs.

Then came more drama as a second VAR penalty was given and saved.

Krul punched a corner clear to the edge of the area where it found Fred, who hit a shot goalward but which was deflected wide by Cantwell. From where I was sitting in the River End, there seemed no problem but once again the VAR message went up on the big screen.

At least a couple of minutes again went by before the decision was made that it was another penalty. The new rule of  “handball”, even if not deliberate was the issue as the ball flicked off Todd’s arm. This time, Rashford didn’t fancy the spot kick and Martial stepped up.

As before, Krul went through his distraction techniques and yet again, they worked. He dived full stretch to his left and pushed the ball out for a corner. 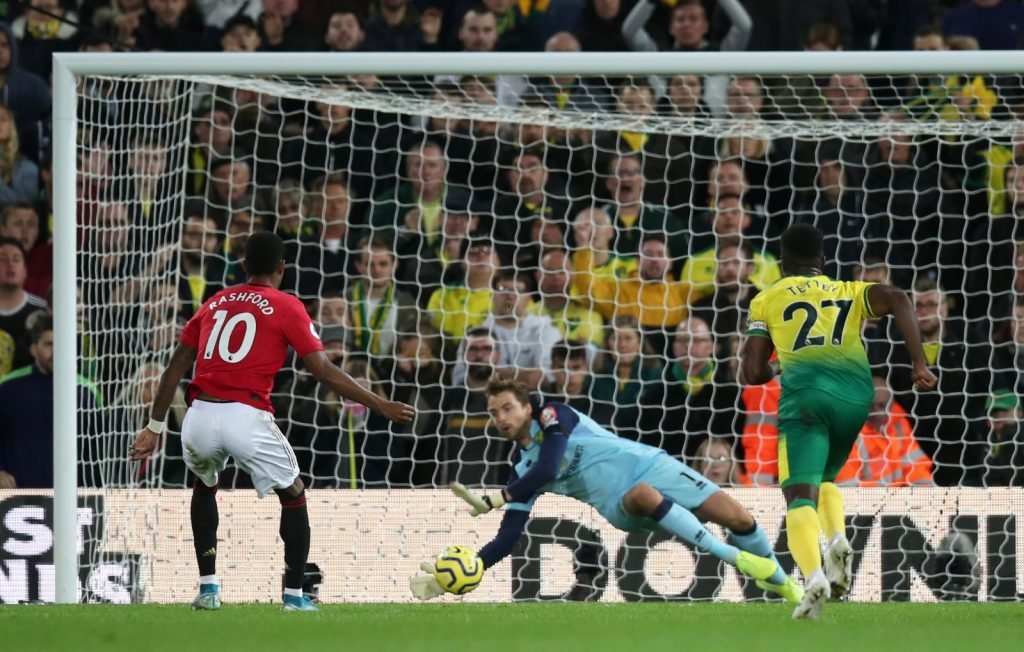 In between all this, he also made a sensational save from Rashford about three yards out, somehow managing to push the ball over the bar. He also made another good save with his feet that all added up to the score “only” being 2-0 at the break.

In the second-half, Daniel Farke did everything he could to get back on terms as he made a double substitution at half-time. He brought on Onel Hernandez and Marco Stiepermann for Todd Cantwell and the poor Moritz Leitner, who just couldn’t affect the game playing at number ten. On 66 minutes, Sam Byram came on for Lewis as City went three at the back. I can’t fault Farke, as I say, he tried as best he could to change it from the bench.

The next goal would be crucial for the game and eventually, despite a more spirited showing from City, it went to United. Emi Buendia lost the ball in midfield and it was played through by Rashford to Martial, who lifted the ball over the advancing Krul.

Yet again, McTominay’s celebrations weren’t exactly sporting as he screamed at the wheelchair users in the South Stand. I don’t imagine that was deliberate but even so. You stay classy, Scott.

Ibrahim Amadou was injured in a collision with Krul when Martial scored and had to hobble through the rest of the game, basically the last 15 odd minutes with all subs used. He could barely run and went up front to make a nuisance of himself as Alex Tettey dropped back into central defence for the second week in a row.

There was still time for Hernandez to bag a fine individual goal as he dispossessed McTominay and sprinted in on goal, beating three more defenders at pace before firing low past David De Gea and then Sssshhhhing the United fans, much to their bemusement.

It finished 3-1 but there are a few things that I want to point out.

There were what seemed like at least two minutes as we waited each time for a decision to be made and then, coupled with two goals as well (30 seconds each), add on the penalty and odd injury and I’m wondering why did we only get three minutes of time added on at the end of the half?!

I like the idea of it but I’d rather it was just sacked off if it’s going to be like this. I’d rather put up with the odd dodgy decision, to be honest.

Our defence is porous, no doubt about it. The loss of three of our four central defenders to injury hasn’t helped but we have to defend better if we are to be competitive at this level.

The difference between the two defences was huge. By contrast, McQuire and Lindelof never looked out of breath, compared to Godfrey and Amadou and yes, I know McQuire cost £80m, I’m just noting the difference in quality and positioning.

Teemu Pukki was often isolated, yet again. This is becoming a regular theme and he is unable to have much of an impact now that the Premier League have seemingly “worked him out.” I’m even considering dropping him from my Fantasy Football team!

Finally, we have the spectre of further serious injuries to key players hanging over the squad after this game.

The collision between Krul and Amadou as they both attempted to block Martial’s goal left Amadou hobbling badly and having to carry on. Should he have kept on playing? That has to be a decision for the medical team and the player to make. Players rarely want to come off, so I guess we have to trust the medical experts on the field at the time.

Krul needed some treatment on a knee issue but played on. After the game, Farke said he was worried about his keeper’s knee, saying it was the same knee that he had an ACL injury on a few years back. There’s no confirmation of anything yet but the mere mention of ACL makes me nervous.

Ultimately, these sorts of games against big clubs are “free hits” but I was expecting a better showing against an obviously weakened United side when compared to their recent past glories. They look a long way short of the top four this season but we looked a long way short of them here. Next up are games at Brighton and then at home to Watford, we need to not lose at the AMEX and then beat Watford to get back on track, I’d say.