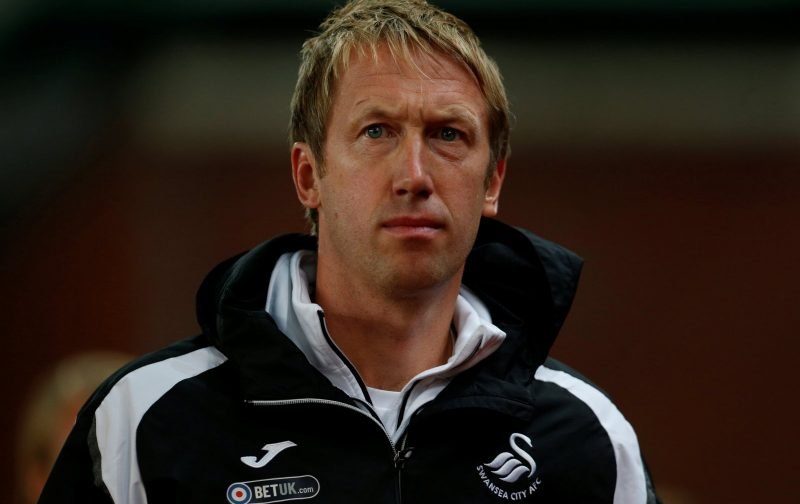 Graham Potter says that Norwich City are the best team in the Championship and that no one has done a better job in the UK than Daniel Farke this season.

Swansea take on Norwich City at Carrow Road on Friday night in the first of a tough looking triple header. The Swans will then play West Brom in mid-week before taking on Pep Guardiola and Manchester City next weekend in the FA Cup.

“It is going to be a good week to learn about ourselves. Norwich are the best team in the Championship and next week we play one of the best teams in the world,” said Potter, as reported here by Dai Sport.

“I don’t think any coach has done a better job in the UK than Daniel Farke this season at Norwich and Pep Guardiola is the best manager of my lifetime.

“This is unique and why you come to the UK to experience this type of challenge as a manager. It is some test for any club in the country, let alone us.

“But it’s brilliant. We will find out a lot about ourselves and we will be better for the experience.”

Norwich beat Swansea at the Liberty Stadium 4-1 earlier in the season and currently top the table, two points ahead of Leeds United. A win on Friday night would see them move seven points clear of third placed Sheffield United, albeit with the rest of the Championship set to play on Saturday and Sunday.

“Norwich should be an inspiration for every football club,” added Potter.

“They faced relegation, they restructured their club, they sold some key players for good transfer fees, but were brave enough to carry on with their development and invest their money in other areas.

“Now look where they are. It is a fantastic achievement and all credit to them – they are the best team in our league.

“We started the game quite well against them at home and were probably the better team for the first 15 minutes. But then they punished us and it wasn’t a nice experience for us after that.

“They play really good football and they have grown and grown as a team. They didn’t start the season well, but they’ve stuck with it.”