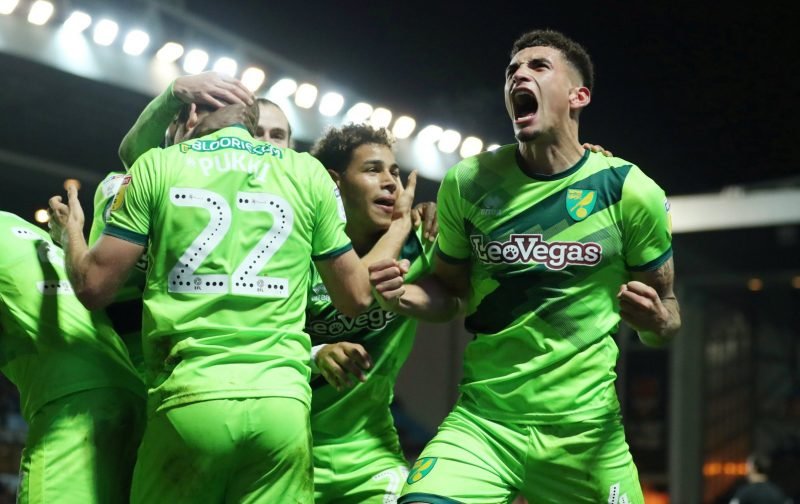 Norwich City “stumbled” again as they drew for the second time in succession with a 1-1 draw at the DW Stadium against Wigan but are still clear at the top of the table.

With the background of a high noon, Sky TV kick off and 5,000 odd travelling Canary fans, there was a certain amount of pressure on Norwich, especially after conceding in the 97th minute against Reading and then seeing Leeds beat Sheffield Wednesday on Saturday evening.

Other than an early snapshot from Teemu Pukki that was blocked, Wigan showed themselves to be decent in possession and quick to counter against a Norwich side that I imagine most outsiders would expect to beat them.

Paul Cook set his side up like for like with a 4-2-3-1 formation and as is his way, he wanted them to play football rather than just sit back.

The game’s opening goal came on the stroke of halftime when Ben Godfrey charged down a shot on the edge of the area. The ball hit his thigh and then deflected up onto his arm and amid all the cries for a penalty from the Wigan players, referee Mr Linington decided to give it and he pointed to the spot.

I have to say that the ball was very close to him, hit with power and Godfrey’s arm did not move towards the ball. I don’t believe that VAR would’ve given it as a penalty but the referee did. I assume he didn’t see the ball strike Ben’s thigh despite looking straight at it.

Danny Higginbottom, on Co-commentary, called it as “100% a penalty” but then backtracked when he saw the replay, calling Godfrey “unlucky.”

However, despite the Sky studio panel, which included Grant Holt, all not thinking it was a penalty, Higginbottom later stuck to his guns and his original thought it was handball – it matters not, Reece James scored it.

I was hoping for some changes a little earlier than usual but as the second half clock ran down and City started to come into it a bit more, at least in terms of possession, we still didn’t really look like scoring.

On 76 minutes, Farke went for broke and brought on Leitner, Vrancic and Rhodes for Trybull, Lewis and Cantwell and we finally got the breakthrough on 81 minutes.

Kenny McLean won the ball in the middle and played a lovely through ball for Pukki to run onto and stroke past Walton for the equaliser.

There was late drama as both sides went for the win with first, Leon Clarke heading in from a James free-kick only for the “goal” to be chalked offside.

Then, with 8 minutes of time added on, Pukki fired straight at Walton and then narrowly wide moments later but it finished level.

Any point away from home is a good point and this one inches us closer to promotion, maintaining the 7 point gap to third place but narrowing the gap to second-placed Leeds to just 4 points now.

City didn’t play that well here and the home side were much better than their league position suggests. Much like in the opposite fixture at Carrow Road earlier in the season, Wigan were a tough nut to crack.

Let’s hope they are this resilient against Leeds next Friday!