Paul Lambert To Become The New Ipswich Boss? He’s Just Somebody That We Used To Know 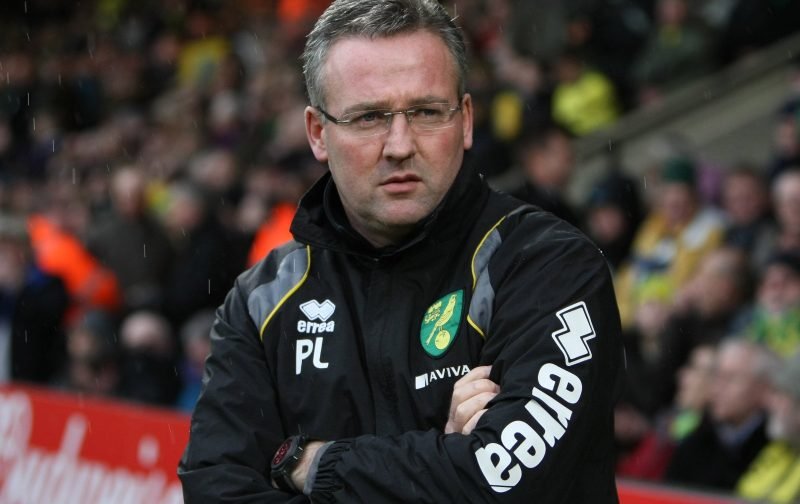 The news late on Thursday afternoon that Ipswich Town had sacked Paul Hurst was not exactly earth shattering for the Canary nation because after all, he had been a bit rubbish, hadn’t he?

I for one, and I bet you’re with me on this, was slightly disappointed because another month or so and they could’ve been adrift at the bottom. That is, of course, why Marcus Evans acted to try to save his club from relegation.

The news that immediately followed, reported by both national and local media outlets, that Paul Lambert was being lined up to replace Hurst was a little more of a shock, if not quite earth shattering.

Evans is clearly no respecter of the past and club allegiances, as evidenced by his attempt to sign Cameron Jerome in the summer. Jerome’s agent went public with the news and Cam’s reasons for rejecting the offer, which were basically that he didn’t want to sour his relationship with the City fans.

Lambert though has no such loyalties or cares, it would seem.

It all comes down to that emotional reaction to these things that we, as fans, have but that players and managers don’t have. They work in the football industry and aren’t usually invested emotionally in a club, unlike you and me.

If I were an Ipswich fan (shudder) I wouldn’t want Lambert as the new boss at Portman Road, for no reason other than the Canary connection. His recent CV, since leaving Villa, hasn’t exactly been great but he did manage to save Blackburn from the drop a few years back before leaving due to the Rovers’ board having not enough money to invest for the future.

He managed averagely at Wolves before they were taken over and it was then decided that he wasn’t the “right man” and then, he got another shot at the big time with Stoke. An appointment that came right out of the blue.

He had half a season to turn things around but couldn’t make it happen for a club that was in turmoil on the pitch and in the dressing room, Again though, he didn’t achieve but he has experience in spades.

The prospect of him pitching up at Portman Road doesn’t worry me though. Quite simply, Lambert doesn’t mean that much to me anymore and as I’ve just written, he’s hardly been a roaring success since leaving Norwich.

Don’t get me wrong, I’ll forever remember that period as some of  my best times watching Norwich City but ultimately, it’s what the club accomplished together, not just one man. Every other player involved has gone on to represent other clubs. Grant Holt even went on loan to Villa under Lambert but I forgave him for that.

Sometimes, it just clicks at a football club. You get the right manager (or Head Coach) and the right players/characters in as well. Lambert was fortunate to have Grant Holt, Wes Hoolahan, Gary Doherty, Chris Martin, Daryl Russell etc in the squad already.

It all gelled and Lambert found his stock at its highest through two promotions and creating stability and survival in the Premier League.

After he quit to join Villa, he was gone and that was that. We needed another manager, got one and life went on. I can’t say that I ever really thought much more about him. Yes, I was annoyed when Villa kept beating us under him but weren’t we all?

Since then though, I’ve just watched with only slight interest at what he’s been doing since. It hasn’t affected us and I wouldn’t ever have wanted him back as Norwich City manager.

“Don’t go back to ex-girlfriends or football managers” is one of my mantras for life.

What I wouldn’t have wanted though, was a former Ipswich manager to be in charge at Carrow Road and I expect it’s the same for the Ipswich fans.

“Is there nobody else in the whole of football?” I would be thinking.

That’s just the strange tribalism that football supporting is all about.

What Lambert does have though, assuming he takes the Pony job, is an opportunity to become the ultimate double agent. Just imagine if he took them down to League One?

It will be interesting to see what happens next at Portman Road, with The Independent and Mirror reporting that Lambert could be in place before the end of the week, in order to face Millwall at the weekend.

If he takes it on, that February meeting at Carrow Road with the Glorious Canaries is going to be even more spicy than usual.

Bring it on, having watched them against Leeds, I wish we could be playing them sooner rather than later.

As for Lambert, he’s largely irrelevant to me now and just somebody that we used to know…