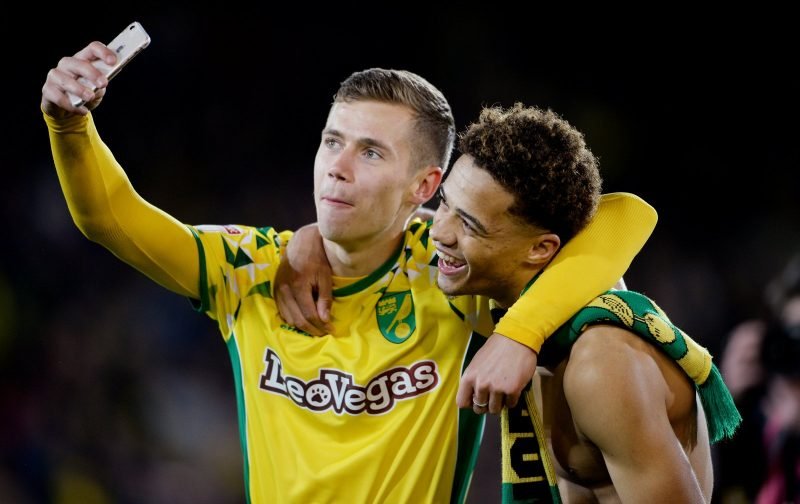 Norwich City are back in the big time and that means that unbridled joy is going to be the order of the day today and for quite a few days onwards into the future.

A slightly nervy, but in the end comfortable, 2-1 home win over Blackburn saw the Canaries promoted at home for the first time in nearly sixty years. Not even I am old enough to remember that one!

We’ve now got a terrific summer to look forward to with all the transfer gossip that’s going to come our way. Some of it outlandish and ridiculous and some of it much nearer the mark.

A striker from Bundesliga 2 anyone?!

The job isn’t done just yet though because we all want to finish the season as Champions don’t we? One more game remains to make that happen before a civic reception on May 6th Bank holiday Monday at 9 am at City Hall, followed by an open top bus tour of the City.

That same afternoon is the Wes vs Russ match at Carrow Road, where the first team squad will be doing a lap of honour and then it’ll be a countdown to the Premier League fixtures being released.

In the meantime, social media was pretty crazy on Saturday night and here are the best bits…

What are we lads? ???? #ncfc pic.twitter.com/EGqMx0sSpY

⬆️ Norwich have been promoted to the Premier League, ending a 3 season stay in the @skybetchamp

We are premier league!

Flags in the Lower Barclay tonight. Another super display thanks to efforts of @BE_Norwich and @AlongComeNodge #ncfc #OTBC pic.twitter.com/CJOxlMpPEV

Congratulations to all my teammates who have worked so hard all season. And all the staff and fans, Greatly deserved promotion to the promised land ⚽️???????????? fantastic achievement for a great club @NorwichCityFC

Here's a collage of the latest flags I've designed with @AlongComeNodge On display in the Barclay tonight, an appreciation and thank you to our global squad. #ncfc ???????????????? pic.twitter.com/qquBu2Me4T

Delighted that Stuart is out and being interviewed by Sky too. Man needs to take a huge amount by of credit for sorting out the utter mess he found it in. Long may he be around #ncfc #otbc

What a day. For a long time after losing Gemma I struggled to really engage with football. Thank you @norwichcityfc for helping me fall back in love with the beautiful game. We.Are.Premier.League. ???????????????????????????? #OTBC pic.twitter.com/4fVRlPmLpA

Amazing achievement for everyone at @NorwichCityFC !! Dominated the league & done it in style. Buzzing for the boys and management ???????? enjoy it canary fans ????????

Congrats to @NorwichCityFC on promotion back to the Premier League. Well done to all the staff & players but most of all for the loyal supporters that go week in & week out – ENJOY, back where the club belongs OTBC

Absolutely delighted for my former club @NorwichCityFC fully deserved on promotion and wish you all the best next season in the premier league ????????

This really wasn’t supposed to happen.

Huge congrats to @NorwichCityFC on their promotion to the @premierleague – a class club who had belief in a manager when others didn’t see what he was doing! Fantastic achievement! #ncfc #canaries ????????

9️⃣2️⃣ of the 1️⃣0️⃣1️⃣ goals scored by #Norwich players in all comps this season have been scored by players signed under Daniel Farke’s management of the club or given their #NCFC debuts under him (91%).#FarkeLife paying off in style????????⬆️#OTBC ???????? pic.twitter.com/w8kYe47iVZ

Congratulations to @NorwichCityFC on being promoted to the Premier League. See you on @BBCMOTD in August. ????????

Minutes per goal for Championship midfielders in 2018/19 (minimum five goals):

Great to celebrate us going up with these two legends.
Nights like this make me realise how lucky we are to do what we do.

So the Promotion celebrations in the City on Bank Holiday Monday start at 9am.

If you think I’m getting Sanders at 7:16 from Sheringham and staying in Norwich all day for the boys and then watching Wes vs Russ, then you’re absolutely right.

I’d die for this club. Love it #ncfc

Unbelievable achievement for my former club @NorwichCityFC . Great scenes to watch???????? Daniel Farke and all the lads have been Breathtaking to watch all season. See you at the Carra next year canaries ???????? #NCFC pic.twitter.com/jyRtW2iEWj

GOING UP! @NorwichCityFC is headed to the @premierleague! Congratulations to everyone involved! #ncfc ???????? pic.twitter.com/OpFZ2CI3nm

And the winner of Player of the Season and the Barry Butler Memorial Trophy is….TEEMU PUKKI! ???????? #ncfc pic.twitter.com/alNcmWyqWe

Sensational from Norwich. Certain people had the courage of their convictions to make drastic changes when needed. Turned a club spinning into disaster into one heading into the Premier League. Can never be underestimated. #ncfc

A Waitrose shop on an Aldi budget #OTBC #NCFC pic.twitter.com/o3AnAG1qtg

⚽️ Most goals scored
???? Only six defeats all season
???? Championship Player of the season
???? Their best points return in nine years.

???? Norwich City are back in the Premier League. #ncfc pic.twitter.com/CNuDxcoQ4t

What a fabulous season. Made even more special by having a group of players with character and skill; who play the game the right way with a smile on their face. And the fans have done themselves proud too. Hopefully we can put the cherry on top with a deserved title. #ncfc pic.twitter.com/9jGCuP6mKc

From start to Finnish – what a season #NCFC pic.twitter.com/KVWzDyw3sm

After a brief delay involving ice buckets and champagne, Daniel is finally starting his post-match press work. What a night, so proud of daniel, the staff and players – and happy for the fans and Delia and Michael. #otbc #ncfc #premierleague pic.twitter.com/VL371X6nNH

Probably the best season of my life. Definitely the best football I've ever seen us play. ????????#ncfc pic.twitter.com/OvWaQ8HwQr

Full congratulations to @NorwichCityFC #ncfc on their confirmed promotion. Wow they have been such an outstanding side to watch. Brilliant structure at the top of the club, some fantastic recruitnent and belief in youth and talent. Well done to all in yellow and green

Lewis in tears, Tettey dancing, Farke hugging every single player, what an atmosphere, what a club. Farke & Webber have done a marvelous job as have us fans. @AlongComeNodge @BE_Norwich fantastic effort, must keep this going next year. We deserve this ???????? #CanaryCall #OTBC #NCFC

Well done to everybody involved with @NorwichCityFC amazing season, let's go and win the League next week! #PremierLeague

From the brink of financial insecurity, with no expectation and not given a hope of achieving anything.

This #ncfc have defied the odds, fought like no team has dared to fight and will give the Premier League a right go next season.

It’s not to be in love with this team.

Just love supporting this club! What a season it’s been, CR ended on a high ???????? #NCFC #goingupupup #PromotionParty pic.twitter.com/35dgAy3CHV

Time to be gracious, to be good winners, to … oh sod that. Wooohooo. #ncfc pic.twitter.com/fv8a51zGkB

#NCFC back in the @PremierLeague. #otbc pic.twitter.com/R9KtvDdhmh

Remember when we got ridiculed for painting the Away dressing room pink?
Reckon it worked out in the end…#ncfc #efl #Premier_League pic.twitter.com/4ZhhkzLYeO

I still can't work out how we've achieved this. Simply incredible. #ncfc pic.twitter.com/J2VaW3IUf0

I hope the rest of football is raising a glass to this phenomenal achievement which shows what can be done with great planning and recruitment! Wonderful! #ncfc