A Week Is A Long Time In Football But Who Will Blink First In The Race For Promotion? 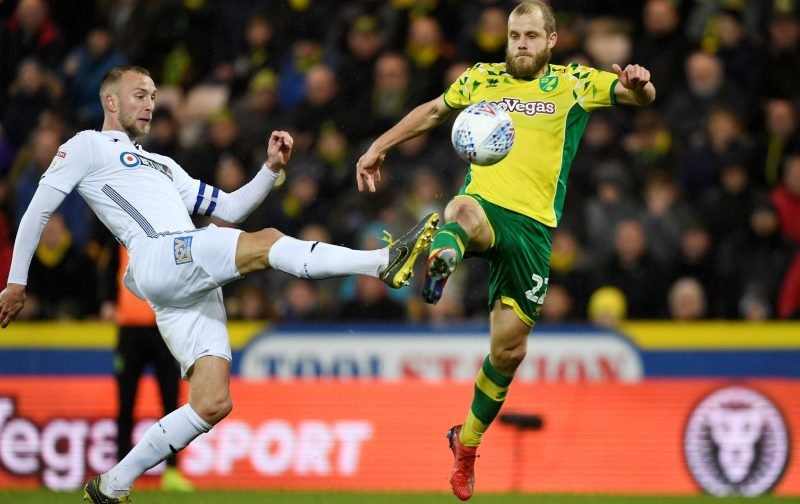 I won’t deny that I was chuffed to bits when I left Carrow Road’s turnstiles on Friday night, knowing that the three points were in the bag and that the pressure was all on Leeds and Sheffield United who were to play the following day.

I was out all day on Saturday, visiting our eldest son in Nottingham, he’s in his first year of an economics degree at University there, so was only able to keep a cursory eye on the scores via our youngest’s Sky Sports app on his phone.

Both Leeds and United won, so we’re in an “as you were” situation. Funnily Enough, Ipswich Town actually did us a favour as they held poor old West Brom to a draw at The Hawthorns, meaning that the gap back to fourth place in the league is now eleven points.

This was surely the weekend when the number of contenders for automatic promotion dropped to just three.

Wins for both Bolton and Reading have done the Tractor Boys no favours though and the draw certainly did Darren Moore no favours at all.

The announcement on Saturday evening, that Moore had lost his job came completely out of left field for those of us not associated with the Baggies.

It may be that there’s been more going on at WBA than this casual Canary observer is aware of but it did seem very harsh.

Moore has got his team comfortably in the top six and it’s only really been the two defeats at the hands of United and Leeds that have ended their automatic challenge in the last month. It seems the draw with Ipswich was the last straw but what now?

Do they have someone in mind to replace Moore quickly? I suppose they must have, otherwise, they surely wouldn’t have pulled the trigger, would they?

The Baggies still have the vast majority of their Premier League squad but I must admit they looked woefully off the pace in the thumping at Leeds. They played that game a world away from the way that Norwich approached the same fixture a month ago and looked slow and leggy in the midfield with Gareth Barry looking all of his 38 years. Mind you, 29-year-old Jake Livermore was no better.

Moore played Dwight Gayle on the left that night, too. So maybe there was more to it than what we can see on the surface.

Getting back to things of a yellow and green persuasion, the win on Friday night against Swansea was just the sort of result that this time of the year requires.

The performance now becomes secondary to the result. Swansea put in, I’d say, the best performance of any visiting team to Carrow Road this season.

Yes, Leeds beat us 3-0 back in August but we weren’t that bad that day. Leeds scored with their first shot on target and were clinical throughout that game. We dominated them for the first 20 minutes, as we’ve done to plenty of others since and I just thought the Swans were excellent.

Brentford also impressed me at Carrow Road this season and City grabbed six points from the nine available in those matches I’ve just mentioned.

The goal that City scored was a thing of beauty and it came from the left boot of our own Argentinian maestro after his first touch created the chance to smash an unstoppable drive into the Swansea goal.

Emi Buendia has set the Championship alight with some tremendous moments this season. So much so that when asked on Twitter in mid-week by a Leeds fan, who is the best player in the league “Surely Pablo Hernandez?”

Journalist Alan Nixon replied that he’d rather have Emi Buendia.

The fact that Buendia cost a rumoured £1.5m and that he couldn’t get a game at Getafe is simply astonishing. His technical ability is best described as sensational. Some of his passing is just out of this world, as is his ability with the ball at his feet. He is an absolute joy to watch and long may that continue.

Looking ahead to what’s coming up next, I’ll be pleasantly surprised if we are still top when we play Hull City at home on Wednesday night.

The night before will see Reading host Leeds and Sheffield United entertain Brentford.

Like I say, Brentford have impressed me and that will be a tough test for United. Reading have found a little form over the last two weeks and will be keen to make it three wins in a row but that will be a mighty task against Leeds before the big showdown next Saturday lunchtime.

Live on Sky Sports (naturally) at 12.30 pm, Leeds and Sheffield United will face off in what could be a season defining game for both of them. A draw would be nice for Norwich but a win for either, depending on how things go in mid-week wouldn’t be bad either. I imagine that many of us will be glued to the TV next Saturday.

Hull have dipped in form lately, after giving us a good game in the away game. That coincided with the start of a decent run for them but a 3-0 beating at the City Ground against Forest on Saturday shows that they are a little out of sorts of late. Let’s hope that continues for at least a game longer.

It is literally going to be a case of who blinks first in this promotion race but the bottom line is that it is still in our hands.

They say that a week is a long time in politics and the same goes for football and looking at Darren Moore’s situation shows how high the stakes are in English football at the moment.

Failure to gain promotion at the first time of asking is likely to have huge financial ramifications for the Baggies next season but have the West Brom board blinked too soon? I guess we’ll know soon enough.