Can Norwich’s Win At Rotherham Be A Catalyst For Positivity? 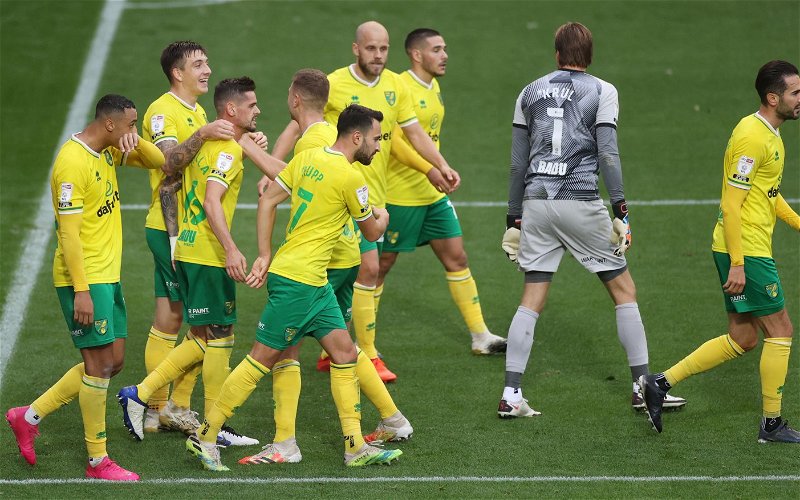 It’s not quite working yet, is it?

Two wins, two defeats and a draw from the first five games isn’t what you’d call stellar form and when you consider the form that Norwich City have shown so far, it can only get better, surely.

Norwich travelled to Rotherham with two weeks behind them since their last match, a 0-1 defeat to a woeful Derby County and two weeks is plenty of time to dwell on the manner of such a defeat. City dominated the ball that day but just couldn’t put the ball in the net, which is becoming a bit of a trend.

Tim Krul played the role of both villain and hero in the game’s opening 21 minutes. He fired an ill-judged high ball out to Max Aarons on the wing only for Clark Robertson to beat Max in the air and play in Freddie Ladapo who turned Grant Hanley and fired past Krul after just three minutes.

Rotherham looked much the better side as they set about Norwich in a physical and organised manner. Paul Warne, watching from his sofa at home due to COVID isolation, will have been very pleased with how his side went about things. I don’t reckon that anyone in their team is below 6′ tall and that really put the pressure on every time that the home side won a free-kick.

Norwich will be a big scalp for anyone in this league, we all know that, but it does concern me how City have struggled not only here, but against Huddersfield and Derby as well. I don’t put the Millers into the same category as the last two though because they played very well and look like they will be a handful for plenty of teams in the league.

Rotherham continually squeezed Norwich and Krul had to be on his guard throughout the game, making two further great saves in the final 15 minutes. It wasn’t all Rotherham though and Norwich had plenty of chances of their own with Rotherham’s keeper, Jamal Blackman who’s on-loan from Chelsea, denying Stiepermann, Idah, Hugill and Pukki. He’s had eight loan spells at age 26 and never made an appearance for his parent club but he had a stormer here.

Speaking of Jordan Hugill, he started the game ahead of Teemu Pukki, who may have been dropped because of form or his exploits for Finland over the last ten days in which he played twice and made two assists. It proved a good choice as Hugill put on an all-action display which was probably, apart from the result, the best thing about Norwich here. He demanded that he take the winning 95th minute penalty after Emi Buendia was brought down by Florian Jozefzoon and dispatched it with aplomb and a stuttering run-up.

After the game, I heard him interviewed on Radio Norfolk and he sounded chuffed to have played, scored and won the match. He was very positive about the squad and the future and he finished by saying “I’ve already fallen in love with Norwich.”

The equaliser was an own goal from Ihiekwe who smashed the ball past Blackman from Max Aarons’ teasing cross. Hugill was right behind the Rotherham skipper and probably would’ve scored whatever.

Despite the result though, Norwich were second best for long periods and were it not for the home side going down to ten men on 71 minutes, when Angus Macdonald went in two-footed on Oliver Skipp, it may not have been a happy ending for those of us in the yellow corner.

The sum of all parts in our squad look to be very strong, on paper anyway. I know it’s early days and that you can’t really judge a team until about the ten game mark but I do have some concerns. The inability to break down deep lying, cautious defences, not that Rotherham were that, and the lack of central defenders particularly concern me. With Christoph Zimmermann injured again, Grant Hanley and Ben Gibson were the only two fit centre backs. Don’t get me wrong, they did okay and looked pretty good and could well have the basis of a good partnership going forwards. But, there’s always a “but”, all three of our centre backs have missed significant game time due to injury in the last couple of seasons. It worries me that we’re in this situation again and that we seemingly haven’t learned from last year’s disastrous injury problems at the back.

Rotherham’s aggression and intensity in their press caused huge problems and I’m sure they will feel as though they shot themselves in the foot after the penalty miss and late red card. Having said that, with my glass half full, Norwich stuck to their task and, perhaps very fortunately, they were still in the game to get their equaliser with twenty minutes to go. At the moment, the team isn’t firing on all cylinders, that is clear to see but they do have undoubted ability, the task for Daniel Farke is to get his men playing at levels approaching those of 2018/19.

It’s amazing the difference a win can make. If City had lost here, and they easily could’ve done, then the knives would’ve been out for Herr Farke and in some quarters on social media they already are, but they didn’t. Norwich won and are now nicely placed in the table. Sometimes seasons can click into place after such moments and I seem to remember having a 1-0 win against Middlesbrough around this stage of the campaign in 2018 and after that, Norwich never looked back.

There is plenty of work to do in getting the squad into a similar vein of form and the pressure is on this season, I’m hoping that this win, despite it’s manner, could be a catalyst.